Please ensure Javascript is enabled for purposes of website accessibility
Log In Help Join The Motley Fool
Free Article Join Over 1 Million Premium Members And Get More In-Depth Stock Guidance and Research
By Lee Samaha – Nov 2, 2018 at 11:03AM

The latest results strengthened, yet again, the case for a breakup.

It's no secret that United Technologies (RTX -0.58%) management is looking at breaking up the company after the intended acquisition of Rockwell Collins is completed. A breakup would be good news for investors if the constituent parts of the company trade at a level with their peers, but are the separate businesses on track for their objectives in 2018? And what do their respective performances mean for a potential breakup?

How a United Technologies breakup could look

Given that CEO Greg Hayes has openly discussed splitting the company into three separate parts -- a unified aerospace business comprising Pratt & Whitney (airplane engines and parts) and UTC Aerospace Systems or UTAS (commercial and military equipment and aftermarket); elevator company Otis; and the UTC Climate, Controls & Security, or CCS, segment -- it's a good idea to think of a breakup in terms of these divisions.

This kind of breakup makes sense because it's becoming increasingly clear that the end market drivers are significantly different across the businesses. For example, China's demand for elevators has little to do with Pratt & Whitney's aircraft engine sales or CCS air conditioner sales. Moreover, the trends in the businesses are diverging: The aerospace businesses are outperforming expectations, while Otis continues to disappoint and CCS looks like a business that management could do more with. Here's why. 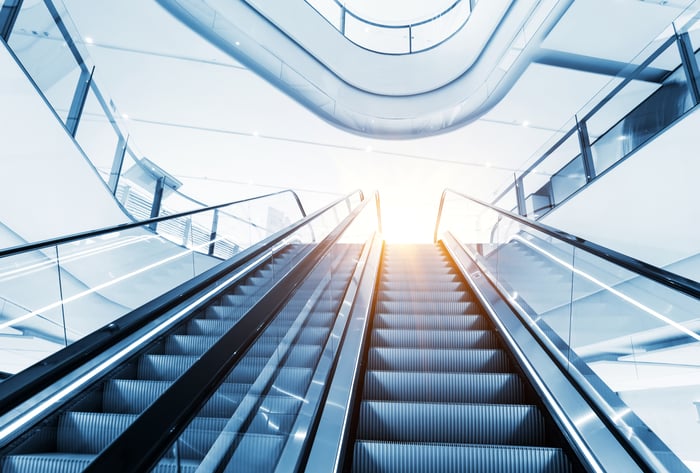 Otis is falling behind on its long-term targets. Image source: Getty Images.

The following table helps illustrate matters. As you can see, United Technologies has raised EPS and sales growth guidance throughout 2018, but on a headline level, it's a story of strength in aerospace more than one of offsetting a weakening backdrop for Otis and CCS.

Starting with UTAS, strengthening commercial aerospace markets have helped original equipment (OE) and aftermarket sales to grow in 2018 and driven a recovery in military sales (up 10% in the third quarter) and what Hayes described as "signs of recovery in the biz-jet segments." Indeed, just as Honeywell International's management outlined earlier during earnings season, all the main sectors of the aerospace industry are entering 2019 in growth mode. 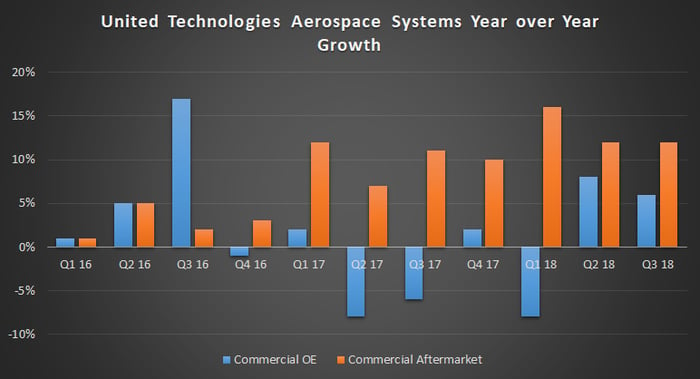 Pratt & Whitney is also benefiting from good end markets -- not least from aftermarket demand for the V2500 engine (used on the Airbus A320 family of airplanes) -- but the company has also overcome technical problems on the new geared turbofan engine and, according to management, is on track to meet its planned deliveries in 2018 -- no mean feat.

All told, management believes that both aerospace segments will grow full-year operating profit at the high end of the ranges in the table above. 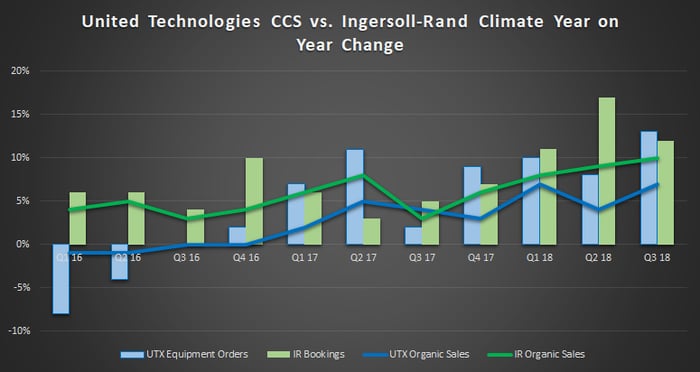 Moreover, as you can see in the table above, CCS has reduced its profit growth guidance in 2018, while Ingersoll-Rand has hiked its climate guidance. For reference, the climate segment contributes more than 80% of earnings, and Ingersoll-Rand's management now expects total full-year 2018 adjusted continuing EPS to be in the range of $5.55-$5.60 when it started the year expecting $5-$5.20; this is an increase of more than 9% at the midpoint and represents a 23% increase on last year's $4.51.

It's a performance that puts United Technologies' CCS segment in the shade, and it's hard not to think that CCS could be run better.

The reduction in full-year guidance comes on the back of higher-than-expected raw material costs and what CFO Akhil Johri described as "further deterioration in Korea, the third-largest new equipment market for Otis." On a brighter note, Johri outlined how Otis sales in China "were up slightly, the first time we have seen growth there since Q1 of 2015. More importantly, we continue to see price stabilization in new equipment orders there."

However, it wasn't enough to stop him backing off the company's 2020 operating profit target for Otis. Moreover, VP of Investor Relations Carroll Lane said Otis's operating profit would "likely" be at the low end of the revised guidance above, even though operating profit growth would return for Otis in the fourth quarter.

All told, the disparity in performance between the aerospace businesses on one hand and Otis and CCS on the other was wider again in the third quarter, and that trend looks set to continue in the fourth quarter. CCS is underperforming its peers, and it's likely that many investors interested in aerospace operations won't want to be invested in Otis. Simply put, the case for a breakup just got stronger, and the onus is on management to deliver.