The industrial supply company finally saw margin turn positive in the third quarter -- and gave a positive sales outlook for next year, too.

It's hard to describe WESCO International's (WCC -1.19%) earnings as anything more than satisfactory, but with a market busy fretting about an industrial slowdown, that just might be good enough. The industrial supply company's 2018 has been characterized by good sales growth accompanied by margin contraction, but the third quarter finally saw some progress on the matter. Let's take a closer look.

As you can see above, WESCO operates on very slim margins, so a small movement in operating profit margin can make a big difference to its earnings. Expanding margins (gross and operating) have been a problem for WESCO in 2018, and the current quarter represents a positive development. 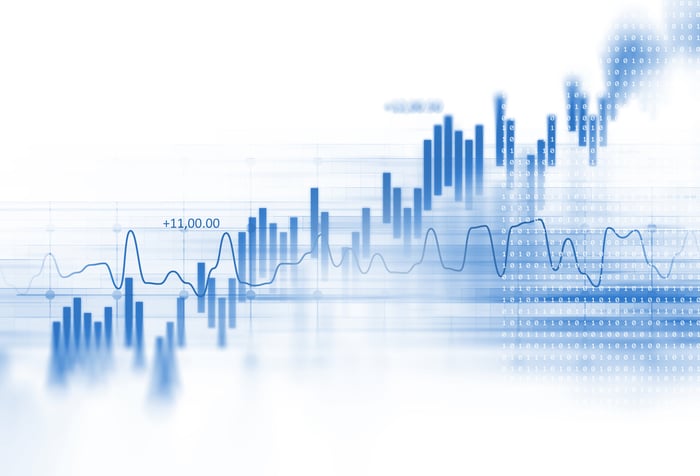 CEO John Engel lauded the success of the company's "value selling and margin improvement initiatives," and operating margin did indeed increase on a year-over-year and sequential basis. But it's worth noting that operating margin was 5% in the third quarter two years ago, versus 4.7% in Q3 2018.

The margin performance in 2018 is all the more disappointing because sales have generally come in ahead of expectations this year. For example, WESCO started the year with management predicting 3% to 6% sales growth for the full year, but current guidance is calling for an increase of 6% to 8%. However, the midpoint of current earnings-per-share guidance of $4.70 to $4.90 is only 3% above the midpoint of the $4.40-to-$4.90 range given at the start of the year.

The chart below breaks out WESCO's organic sales growth by segment. Although it shows a broad-based slowdown in growth in the quarter, it's important to note that the figures come up against a difficult comparison from the third quarter of 2017 -- the initial quarter that WESCO's sales significantly turned up following the U.S. industrial recession of 2015-2016.

Engel said that construction was the only end market that performed slightly weaker than expected. The culprit was the U.S. construction market (Canada grew strongly, according to management), but Engel declared himself disappointed with WESCO's performance and cited labor shortages as a reason for contractors not fulfilling their backlog. 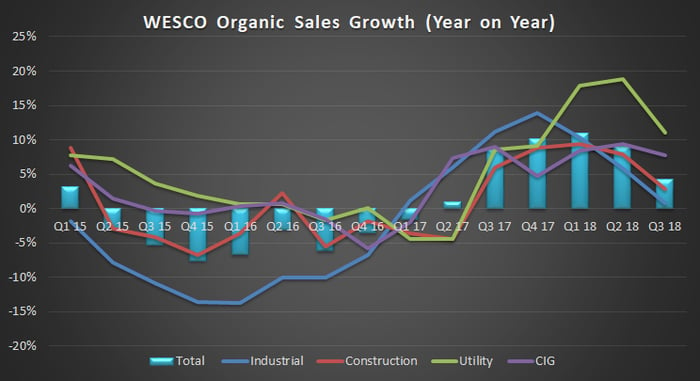 In fact, the natural slowdown in sales growth is implied in the company's sales guidance for the fourth quarter, for which management forecasts just 1% to 4% sales growth.

Turning to 2019, Engel believes WESCO can outperform its end markets. The company's forecast is for 2% to 5% growth in end markets with WESCO growing sales 1% to 2% ahead, resulting in full-year sales growth of 3% to 6% in 2019.

Management's forecast for 2019 looks positive enough, and if the tide has truly turned with regard to margin expansion, then investors can expect a good year of profit growth. Provided the economy holds up and Engel's optimism is justified, then WESCO looks set for another good year.