On a down day for the market, see why Apple fell while Starbucks soared.

After rising for three consecutive sessions, U.S. stocks pulled back on Friday as investors pored over the latest round of corporate earnings reports. The Dow Jones Industrial Average (^DJI 2.68%) and the S&P 500 (^GSPC 3.06%) both saw modest losses. 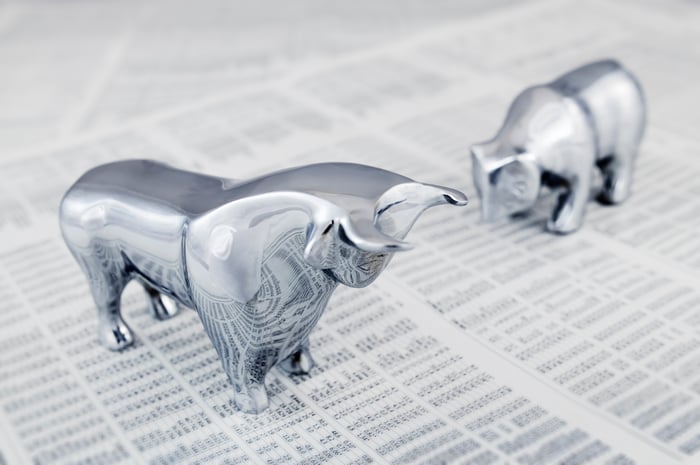 Tech set the pace for today's losers after several days of gains, with the Technology Select Sector SPDR Fund (XLK 3.59%) falling just under 2%. But the retail sector largely bucked the negative pressure, with the SPDR S&P Retail ETF (XRT 3.71%) rising 0.8%.

As for individual stocks, quarterly reports from both Apple (AAPL 2.45%) and Starbucks (SBUX 3.87%) produced contrasting reactions from investors.

Shares of Apple fell 6.6% after the tech juggernaut released fiscal fourth-quarter 2018 results -- but that's not to say those results were disappointing. Quarterly revenue climbed 20% to $62.9 billion, driving a 41% increase in earnings to $2.91 per share. Analysts, on average, would have settled for earnings of only $2.78 per share on revenue of $61.6 billion.

"We're thrilled to report another record-breaking quarter that caps a tremendous fiscal 2018," stated CEO Tim Cook, "the year in which we shipped our 2 billionth iOS device, celebrated the 10th anniversary of the App Store and achieved the strongest revenue and earnings in Apple's history."

Cook added that Apple only recently introduced new versions of its iPhone, Apple Watch, iPad, and Mac, leaving it poised to "enter the holiday season with [its] strongest lineup of products and services ever."

So why the decline? First, Apple told investors to expect fiscal first-quarter 2019 revenue of between $89 billion and $93 billion. Most analysts were modeling sales near the high end of that range.

Second, Apple revealed it will no longer disclose unit sales data for its iPhone, iPad, and Mac products starting next quarter. Management explained during the subsequent conference call that unit sales are no longer an effective metric to gauge the underlying strength of the business. But the move to reduce visibility into its results will almost certainly stoke fears that Apple is attempting to mask an impending decline for any of its most popular product lines.

Shares of Starbucks popped 9.7% after the coffee giant announced impressive fiscal fourth-quarter 2018 results. Starbucks' quarterly revenue climbed 11% to $6.3 billion, driven by new locations and a 3% increase in global comparable-store sales. On the bottom line, that translated into 13% growth in adjusted earnings per share, to $0.62. By contrast, consensus estimates called for earnings of $0.60 per share on revenue of $6.27 billion.

"Starbucks record Q4 performance reflected meaningful improvement in virtually every critical operating metric compared to Q3," stated CEO Kevin Johnson. "As we enter fiscal 2019, we are executing against a clear growth agenda, with a focus on our long-term growth markets of the U.S. and China."

What's more, for fiscal 2019 Starbucks is targeting 2,100 net new stores worldwide, with global comparable-store sales growth near the lower end of its current 3% to 5% range. That should mean revenue in the coming year increases 5% to 7%, which should translate into adjusted earnings per share of $2.61 to $2.66. In this case, both ranges were in line with Wall Street's expectations.

In the end, given its relative outperformance this quarter and with Starbucks stock trading roughly flat year to date leading into this report, it's hard to blame investors for bidding up shares to a fresh all-time high.