Please ensure Javascript is enabled for purposes of website accessibility
Log In Help Join The Motley Fool
Free Article Join Over 1 Million Premium Members And Get More In-Depth Stock Guidance and Research
By Jason Hall - Nov 2, 2018 at 10:57AM

Shares of global coffee giant Starbucks Corporation (SBUX 1.19%) opened up a solid 10% on Nov. 2 following the release of the company's fourth-fiscal-quarter earnings report after market close on Nov. 1. At this writing, about a half-hour postopen, shares are up 11.2% and have already exceeded the number of shares trading hands during an average full day.

So what's the big push today? To paraphrase Mark Twain, the rumors of the demise of growth at Starbucks appear to have been greatly exaggerated. 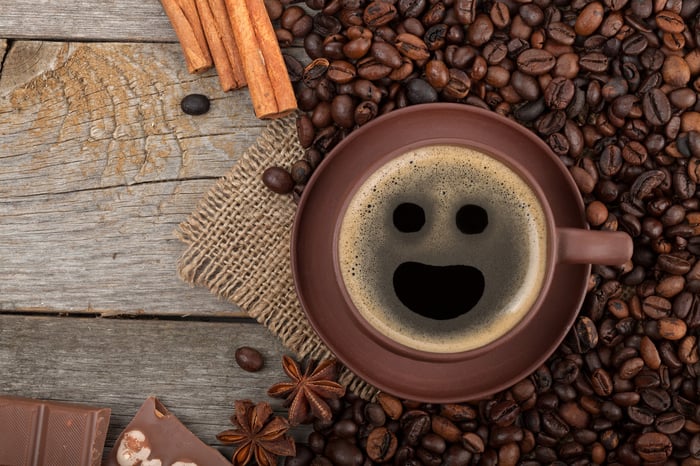 On the top and bottom lines, Starbucks reported results that weren't all that different from its fiscal third quarter. Sales were up 11%, while adjusted earnings per share increased 13%. And while those numbers were rather run of the mill (coffee mill? I feel like there's an obvious pun I'm missing here) for Starbucks, it was the reverse of a worrying trend with the company's comps -- sales at stores open more than one year -- that is primarily behind the market's exuberance today.

On a global basis, Starbucks reported 3% comps growth, a big improvement from its disappointing 1% result last quarter, which also included a measly 2% growth in the U.S. and a worrying 2% decline in China, which management continually touts as the company's most important growth market.

Starbucks roared back in the U.S., turning in 4% comps growth, easily its best result in nearly a year and a half, and reversed the decline trend in China, with 1% comps growth. It's also important to note that its Chinese comps are partly being affected by cannibalization from new Starbucks stores as the company aggressively adds new locations in that market.

At this writing (about 10:13 a.m. EDT), shares continue to accelerate, up about 11.7% to $65.57. That's an all-time high for Starbucks' shares, previously set more than one year ago. That puts the share price trading between 27.7 and 28.3 times the company's just-announced guidance for 2019 earnings.

And while that's not exactly cheap, at least one fellow Fool thinks management could be setting a conservative target for next year. And frankly, that's a reasonable position, considering that the company hasn't really started getting any benefit from its most recent investments in improving efficiency and driving down store expenses.

But with that said, there's one thing investors should also continue to monitor: traffic. For the fourth consecutive quarter, Starbucks reported a decline in transactions year over year, having counted on higher prices and add-on items like food to drive sales higher. At some point, growing traffic is a must.

The good news is that the company is seeing its stores with drive-through and walk-up window service, as well as mobile order and pay functionality, steadily generate higher foot traffic. And management has prioritized adding these features to more stores.