Whether the company can reverse its comps trend is a big deal, but it's not the only thing investors should pay close attention to.

Starbucks Corporation (SBUX -1.88%) shareholders have to be pretty pleased with how the stock has done since reporting its fiscal 2018 third-quarter earnings on July 26. Since then, investors have enjoyed a nice 14.2% ride (including dividends), while the market has fallen about 6.5%. But even with this nice run, the stock price is still nearly 10% off the all-time high, reached in June 2017.

And not for no reason: Even before reaching what remains its peak price, the global coffee giant's growth machine had begun slowing, and investors who had once been willing to pay a heady premium for the premium java seller's shares proved less enthused. Over the past couple of years, Starbucks has steadily seen weakening traffic numbers in its stores, the reversal of a nearly decade-long trend that saw steadily more and more people pick the company for their daily -- or multidaily -- caffeine fix. 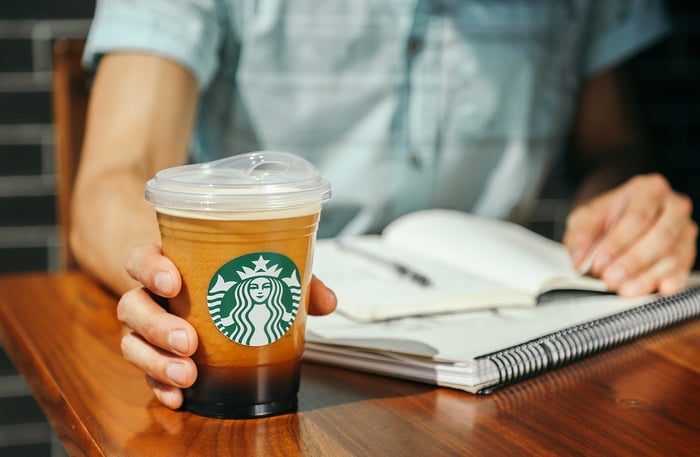 And even while price increases and food sales growth have partly helped to offset the weaker traffic numbers, Starbucks has seen its comps growth -- increased sales at stores open one year or more -- slow from consistently above 5% in prior years to a frankly disappointing 1% growth last quarter.

Will Starbucks finally kick-start comps growth? That's one of the biggest things investors should watch for when it reports fourth-quarter earnings this week, along with progress on getting rising expenses back inline and progress in China, which management regularly touts as its biggest -- by far -- growth opportunity.

Starbucks' U.S. store base is still such a massive portion of the whole that it heavily impacts the consolidated results while also accounting for a substantial portion of the company's profits.

Last quarter, CFO Scott Maw (who is retiring later this year) said Frappuccino sales declined more than two percentage points, taking a huge bite out of the result. On the earnings call, CEO Kevin Johnson pointed out that while Frappuccino and other blended beverage sales weakened in the quarter, the growth of other beverages helped to offset the weakness.

Furthermore, he described the fiscal third quarter as "the quarter of Frappuccino," indicating that it has an outsize impact on this one period that should be lessened in the fourth quarter. He also made a point of emphasizing that comps -- both revenues and transactions -- are growing during the morning. Food sales have also become a bigger portion of the mix, now accounting for 22% of sales, up 1% on a comps basis last quarter.

But it's not just about more food and beverage choices. Starbucks also continues to invest in engaging both regular and occasional customers to drive more sales. Starbucks recently opened up its app to nonrewards customers, allowing them to utilize the mobile order-and-pay feature while also giving the company more data about their preferences so it can more effectively market to them. As of last quarter, 6 million nonrewards members had registered to use the Starbucks app.

Based on management's comments, it seems that moving past the biggest Frappuccino quarter and not losing a day of sales for store training alone could be worth 3% better comps. And while there's already good news on the strong morning traffic, Starbucks investors should watch closely to learn more about the full-day sales and traffic trends.

On last quarter's call, management called out the amount of administrative tasks its store employees spend time on and how they take away between two and three hours each day -- per store -- that could be regained and repurposed to customer-facing time. By the end of next fiscal year, the company aims to reduce store administrative tasks by 50%.

Furthermore, the company is already taking steps to more appropriately staff and schedule its stores. It has plans to shift away from a single labor algorithm to a segmented approach, based on each store's sales mix, traffic patterns, and the type of store and location. Store employees will also have mobile access to scheduling, which should facilitate better coverage.

The company also has plans to utilize technology where it can to automate processes, including many inventory and product-ordering tasks, which should help drive down expenses over time and prioritize store employee scheduling to customer-facing activities.

These are in addition to the company's investment in digital technology, including its mobile order-and-pay app, to create a more efficient operation that's also more engaging and convenient for customers.

It's not clear how much impact these actions will have in the fourth quarter, but learning more about the company's progress with these initiatives, which are aimed at delivering long-term gains, should be high on your radar.

Starbucks says that China, which will be home to more than 500 million middle-class people in less than five years, is on track to become the company's biggest market. The importance of the country to its future was made abundantly clear last year, when it agreed to spend $1.3 billion to take over its mainland China operations from a joint venture partner.

And after steadily seeing big gains in this market, investors were stunned when the company said comps there actually fell 2% last quarter. Somewhat concerning, based on Starbucks China CEO Belinda Wong's prepared remarks, is that it looks like competitive entrants to the market took a bite out of Starbucks' sales to some extent. Wong didn't seem concerned about this over the long term, pointing out that the company has faced heavily discounted competition in the past that hasn't held up over time, and customers typically return to the high-quality experience Starbucks offers.

Furthermore, Wong elaborated that Starbucks' biggest competition in China -- at least in the comps regard -- could be itself. From the earnings call:

In other words, aggressive expansion of the store count in certain markets led to cannibalization of sales. Wong went on to stress that while this impacted comps in the quarter, it's absolutely in the company's best long-term interest:

While this acceleration has temporarily impacted comp growth, we continue to achieve best-in-class performance from new stores opened in the last 12 months. I am absolutely sure that our intentional and strategic investment actions were the right moves to set us up for strong future growth in both market share and profitability. Looking ahead, the pace of new store openings should result in more typical levels of sales transfer.

Wong also stressed that comps are only a small part of the China story, as the aggressive store expansion last quarter demonstrated. Between the beginning of this year and 2022, Starbucks plans to more than double its store count to more than 6,000 units. Simply put, Starbucks' China ambitions rest on its ability to deliver on a major growth initiative over the next half decade. Learning how that process is playing out, including the impact of new stores on comps, is an important part of what investors should watch for this week.

China, comps, and cost-cutting efforts are three of the most important things Starbucks management has on its plate right now. But there are a few other things that investors should also pay attention to. This includes the company's progress with its new consumer packaged goods venture with Nestle and an update on its $25 billion capital return program.

In the midst of what has become a very volatile market over the past month, Starbucks stock is likely to be quite volatile postearnings. Tune back in after the release on Nov. 1 for a closer look.