Expectations were pretty muted for Starbucks Corporation (NASDAQ:SBUX) heading into its fiscal 2018 third quarter earnings report, released on July 26 after market close. This was in large part because the company already let the cat out of the bag, pre-reporting a handful of metrics on June 19, sending the stock price down sharply and making some of today's earnings release little more than a formality.

But there are a handful of things in the earnings release and from the analyst call that bear a closer look, including more detail on the company's ongoing struggle with sales at stores open more than one year, -- called comps -- what's happening with China, -- its biggest growth market -- and more detail on the company's plans to increase returns and lower costs going forward. Let's dig into the latest release for more insight. 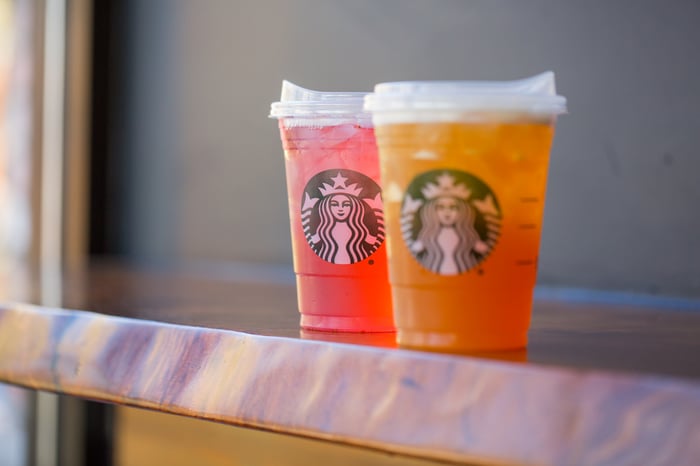 A record quarter, but traffic was down and expenses are up

Starbucks reported record third quarter sales of $6.3 billion, up 11% from last year, and GAAP earnings per share of $0.62 and adjusted EPS of $0.62, up 30% and 13%, respectively, year over year. Comps increased 1% on a consolidated basis, a further slowing of growth from the 2% comps increases in both the first and second quarters of the year.

A closer look at comps offers some reason for concern. In prior years, Starbucks was able to consistently grow comps at or above -- in some cases well above -- 3%, from a mix of higher traffic and bigger tickets. However, over the past year, traffic has been relatively flat, while bigger tickets have done all the heavy lifting. Unfortunately, it's starting to look like Starbucks is developing a traffic problem.

Here is a breakdown of comps by geographical segment last quarter:

As the table shows, Starbucks sold more goods -- or higher-priced goods -- to fewer customers in every market last quarter. But there is some additional context to consider. On the earnings call, Chief Operating Officer Roz Brewer said that a decline in Frappuccino sales and the May 29 anti-bias training closure took a three-point bite out of the Americas segment, though only about one-half point of that was due to the store closure.

Comps in China fell 2% in the quarter, a sharp turn negative after what had been steady positive growth. This weak result caused the CAP segment to report negative comps in the quarter, driven by a 3% decline in transactions.

Operating margins also declined in the quarter, falling from 18.4% last year to 16.5%. The company said the decline was a product of higher spending on store employees, the increased mix of food sales, and the impact of taking full ownership of the mainland China stores late last year.

On the earnings call, CFO Scott Maw said that the increased expense in the quarter was a product of several things, including planned increased spending on employees, the impact of higher food mix, planned investments in technology, and the impact of the May 29 U.S. store closure.

Blame it on Frappuccino and no coffee culture?

Maw also said that management now expects its full-year comps to come in slightly below the low end of the company's 3%-5% growth range, as its expectations are relatively muted for the fiscal fourth quarter. This is likely driven by continued unexpected weakness in sales of its blended Frappuccino beverages, which have declined 3% in 2018, after growing 17%, 5%, and 4% in the prior three fiscal years.

On the other hand, non-coffee beverages, including Teavana-branded teas, continue to perform well, as do sales of food. Teavana and refreshment beverages have increased at least 12% for four consecutive years, and were up 14% year-to-date through May 2018, while food has accounted for 22% of sales this year. On the earnings call, management said that it was seeing growth in every beverage segment, and food, with the exception of Frappuccino. Unfortunately, the positive results from its other products are not enough to offset weak Frappuccino sales.

Management is clearly concerned about comps in China, but its bigger focus is on store expansion. The company aims to expand from 3,000 stores in 100 cities at recent count, to 6,000 stores in 230 cities by 2022. On the earnings call, China CEO Belinda Wong emphasized that China is still a developing coffee market, and that a big part of the company's long-term success there will be tied to its ability to expand the market and continue introducing more and more people to coffee.

Management also committed to taking steps in fiscal 2019 to drive better returns, including accelerating the closure of underperforming company-owned stores and focusing new expansion on its best markets, while opening fewer licensed stores in the U.S. China, on the other hand, is set to see an acceleration of new store expansion, with the company planning to increase its pace by 20% starting next year.

There are legitimate challenges in front of Starbucks, including retail weakness in the U.S. and speed bumps in China as it aggressively develops that largely untapped market. But with a powerful brand and history of excellent operating results, I wouldn't count the coffee giant out just yet. After all, sales and earnings -- as we just saw -- continue to grow, and its powerful economic model generates substantial cash flow that it's increasingly returning to shareholders.