Starbucks Corporation (NASDAQ:SBUX) reported its second-quarter fiscal 2018 earnings results after market close on April 26, with a 14% jump in global revenues to $6 billion, and adjusted earnings up 18% to $0.53 per share. These were some of the company's best-ever results. But another quarter of lukewarm same-store sales growth (it came in at 2% globally), along with weaker operating results that generated a paltry 1% GAAP profit increase, left investors wanting more.

At the same time, China continues to outperform the rest of the company, with comps growth under full company ownership and operation of 4% in the first quarter. Yet as of this writing, in midday trading on April 27, Starbucks shares are on track to close down about 2% as the market's focus on U.S. store comps continues to drive the narrative. But management says it has a plan to accelerate same-store sales, and that the early results look positive. Furthermore, a deeper dive into the company's operating results exposes some important context for the bottom-line results, and how things should look much better in future quarters. 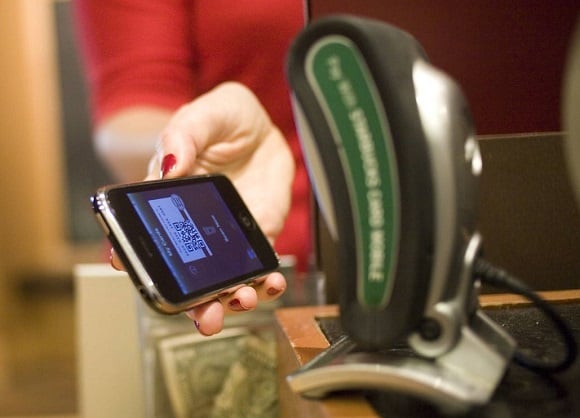 Starbucks wants every customer -- even non-Rewards members -- to use its app. Image source: Starbucks.

Let's take a deeper look at the Q2 results, and how management intends to reaccelerate comps growth while also investing heavily in continued global expansion.

While Starbucks delivered record sales and solid earnings, a number of expenses related to restructuring affected its operating results:

As you can see in the chart above, Starbucks' incremental revenues didn't completely flow to the bottom line. Sales increased by 14%, but earnings were up only 1% on a GAAP basis. Note the sharp reduction in the company's operating margin, which fell nearly 500 basis points to 12.8% in the quarter. This was the result of several different factors, most of which will be nonrecurring, but two of which will have a more permanent impact.

Let's start with the nonrecurring items. Starbucks took restructuring costs in the quarter related to the closure of its Teavana retail stores, but also took an impairment of goodwill related to its retail business in Switzerland. These two items contributed to a substantial reduction in operating income from Starbucks' EMEA (Europe, Middle East and Africa) and "all other" segments. EMEA reported a $4.3 million operating loss in the quarter, compared to a $27.7 million operating profit in the prior year's quarter. "All other" is comprised of the Seattle's Best brand and the high-focus Starbucks Reserve and Roastery businesses under Howard Schultz; it's also where the company classifies the Teavana retail business. This segment generated $114.8 million in operating losses in the quarter, versus a $25.5 million operating loss in the year-ago quarter.

But some increased expenses are recurring.

In U.S. operations -- by far the company's biggest market, and part of the Americas segment -- Starbucks reported operating margin of 20%, down from 22.2% year over year. According to the release this drop was primarily due to "higher investments in our store partners," which translates to higher wages.

The company's emphasis on growing food sales is also affecting U.S. operating margin. Food increased to 22% of sales, up 100 basis points sequentially and from last year, and also driving 1% -- or about half -- of the quarter's comps growth in the U.S. In other words, there will be some trade-off from higher food sales, which are lower-margin than the company's core beverage business. But since food sales tend to be add-ons during peak morning hours, and incremental sales during later parts of the day, they're well worth it in driving more profits to the bottom line.

In China/Asia Pacific, operating margin fell even more, from 22.9% to 17.2% in the quarter. This sharp drop isn't a bad thing related to higher expenses, but a product of the shift from more licensed stores to full operational control of the China stores. Even though operating margin dropped sharply, Starbucks generated 16% more operating income on a 54% increase in revenue in the segment, by taking over operations of this segment.

The key takeaway is that the company is paying a short-term price by shuttering its Teavana stores, and transitioning most of its EMEA stores to licensees, but its long-term results should be strengthened by having more control over the China market, where its best growth prospects are.

Getting more engaged with casual customers

The 2% comps growth result fell short of the company's target of 3% to 5%, though management reaffirmed that goal -- at the low end -- for the full year. How does management think it can pull that off? By putting more focus on casual customers. On the earnings call, COO Roz Brewer pointed out that, while Rewards customers are very important, "the majority of our customers visit Starbucks one to five times a month." She also pointed out that these occasional customers make up nearly half of sales in the afternoon, one of the day parts the company is most challenged to grow.

So Starbucks is putting far more focus on better marketing to its occasional, non-Rewards customers. It has opened up the Starbucks app for non-Rewards users, both as a form of payment, and to utilize it as a marketing tool. This all gets back to the company's plans to be more relevant with its promotions, after seeing its "Frappuccino Happy Hour" generate far less after-promo traffic the past two years. The plan is to be less promotional, and more targeted to individual customers and their tastes.

While not solely related to the shift in how it will market and promote, the company did see steady improvements in comps during the quarter. After being below 1% in January, U.S. comps increased to 3% in both February and March.

Even with two quarters of comps below the company's full-year target of 3% to 5% growth, management held firm in expecting to finish the year near the low end of that goal. The company also reiterated its full-year guidance for $3.32 to $3.36 per share in GAAP earnings, and $2.48 to $2.53 in non-GAAP EPS.

Starbucks also remains on track to open 2,300 new stores this year, and to generate "high-single-digit" revenue growth, before factoring in approximately 2 percentage points of growth from consolidating the China stores. This guidance does not include any expected impact of closing all U.S. company-owned stores on May 29 for racial-bias training.

Will the company's fine-tuned approach to engaging and attracting more customers deliver higher comps growth and profits? That's something only time will tell.