Please ensure Javascript is enabled for purposes of website accessibility
Log In Help Join The Motley Fool
Free Article Join Over 1 Million Premium Members And Get More In-Depth Stock Guidance and Research
By Daniel Sparks - Nov 2, 2018 at 10:57AM

Some investors worry Apple's growth story may be fading.

The pullback in the tech giant's stock follows Apple's fiscal fourth-quarter earnings, released after market close on Thursday. Specific aspects of the quarterly update that may be worrying investors include Apple's weaker-than-expected revenue guidance for its important holiday quarter and the company's decision to stop sharing unit sales metrics in fiscal 2019. 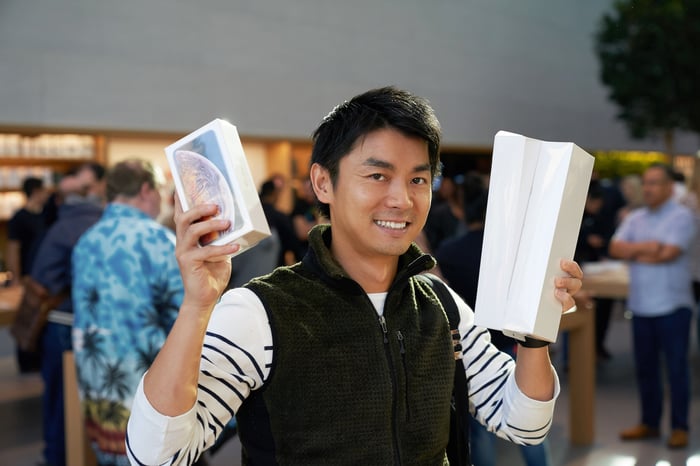 But Apple's outlook for first-quarter revenue in fiscal 2019 to be between $89 billion and $93 billion was weaker than the consensus analyst forecast for revenue of $93.02 billion.

In addition, some investors seem to be disappointed that the company will no longer be reporting unit sales for its segments. "[A] unit of sale is less relevant for us today than it was in the past given the breadth of our portfolio and the wider sales price dispersion within any given product line," said Apple CFO Luca Maestri during the company's fourth-quarter earnings call. Some investors may worry this decision is an indication that management expects headwinds for unit growth.

Apple's revenue guidance implies just 1% to 5% year-over-year revenue growth for its first quarter of fiscal 2019. This would be a significant slowdown from the 20% revenue growth Apple posted in Q4. Of course, Apple Maestri was quick to try to help investors view the glass as half full during the company's conference call, noting:

At the revenue level, we started [guidance] from the fact that we are very, very excited about the lineup of products and services that we have, getting into the holiday season. It's the strongest lineup that we've ever had, and our guidance range, by the way, represents a new all-time quarterly revenue record.