October wasn't the best month for the stock market, and the financial sector was one of the worst performers. However, market weakness creates opportunity. With that in mind, here's why three of our contributors think Axos Financial (AX 1.29%), Zions Bancorp (ZION 0.22%), and U.S. Bancorp (USB 0.30%) look like good bank stocks to buy right now.

A high-potential bank at a deep discount

Matt Frankel, CFP (Axos Financial): As a group, bank stocks have been beaten down in the October stock market sell-off, and one that's on my radar is Axos Financial, which is down 13% in October. Formerly known as BofI Holding, Axos is an online-only bank that offers a full range of banking products and services. 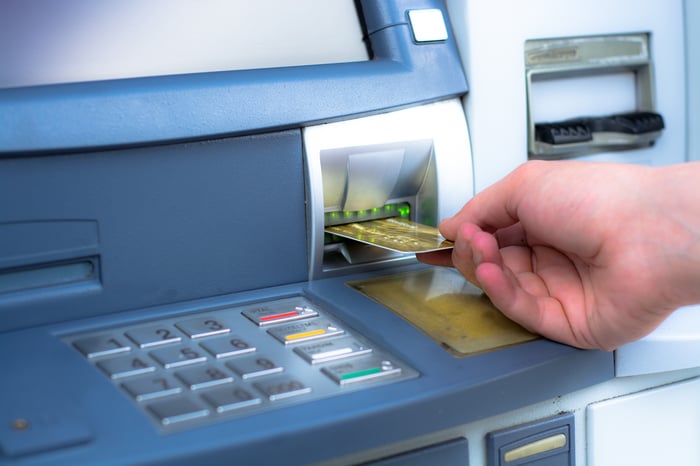 After years of breathtaking growth, Axos seems to have slowed down a bit, but the numbers are still impressive. Total assets grew 14% over the past year, and the loan portfolio grew by more than 15%. And because of its online-only business model, the company is more efficient and profitable than most peers. In fact, Axos' noninterest expense as a percentage of assets is more than 100 basis points less than its peer-group average.

Despite the strong growth, it's important to realize Axos is still very small by banking standards. Its total assets are less than $10 billion, which doesn't even put it in the top 100 U.S. banks. The bank is just starting to expand into potential growth avenues such as personal lending and auto loans, and the company also is growing through acquisitions, such as the recently announced $2.5 billion of deposits from Nationwide Bank.

One reason for the recent underperformance is that profitability and efficiency looked far less impressive than in the past in the most recent quarter, but this was mainly due to one-time items. In a nutshell, Axos Financial is a rapidly growing bank with a highly profitable business model that is trading at a discount.

Feed on the Fed

Jordan Wathen (Zions Bancorporation): The third-quarter earnings season is leaving bank stock investors feeling duped. Many banks that were expected to capitalize on rising rates aren't benefiting to the extent that investors believed they would, as deposit costs are increasing faster than many had anticipated. Zions Bancorporation is an outlier in this respect.

It's fair to say that Zions' best assets are its liabilities. Approximately 45% of the bank's deposits are non–interest bearing, meaning the bank doesn't pay its depositors a dime in interest on such deposits. These customers appear to be sticky, too. The bank reported that non–interest bearing deposits actually increased in the third quarter, in contrast to many other banks, which are losing these zero-cost deposits to higher-yielding accounts.

The liabilities are only one piece of the puzzle; Zion's loan and securities portfolios are similarly constructed to benefit from interest rate increases. Notably, about 61% of its loans reset or mature within one year, so as rates rise, the impact will quickly flow into interest income earned on its loan portfolio.

Zions won't double overnight. It isn't likely to grow its balance sheet much faster than general economic growth, either. But if you're looking for a bank stock that can drive profit growth from rate increases, Zions won't let you down.

A solid pick at a bargain price

Dan Caplinger (U.S. Bancorp): Recent market turmoil has made many investors think back to the financial crisis, and that's led to some poor performance for bank stocks. U.S. Bancorp had a strong third quarter from a financial perspective, reporting record levels of revenue, net income, and earnings per share. The bank continued to see improving credit quality even as it used dividends and stock buybacks to return more than three-quarters of its earnings to shareholders. Yet the share price remains more than 10% below its February highs, and recent market turbulence put a stop to U.S. Bancorp's latest bullish run.

That disconnect spells opportunity. CEO Andy Cecere has high hopes for U.S. Bancorp's future, including a commitment to keep up with rapid changes in the banking industry. Recent layoffs weren't entirely popular, but they did reflect the need to allocate resources to where customers need them. With almost two-thirds of transactions occurring on mobile devices, Cecere sees branches playing a less vital role in favor of mobile application development.

U.S. Bancorp also has an advantage over its larger rivals because it's the largest bank that's not considered to be a global systemically important bank. That means that the Minneapolis-based banking institution doesn't have to comply with all the capital and liquidity requirements that bigger banks face, and that in turn gives U.S. Bancorp greater flexibility in how it operates and structures its business. Add all that up, and U.S. Bancorp looks like a smart pick after its recent pullback.

Although Not Easy, U.S. Bancorp Made a Big Acquisition at the Right Time