Please ensure Javascript is enabled for purposes of website accessibility
Log In Help Join The Motley Fool
Free Article Join Over 1 Million Premium Members And Get More In-Depth Stock Guidance and Research
By Keith Speights – Nov 3, 2018 at 7:20AM

Which stock wins in a matchup between these two biotechs focused on CRISPR gene editing?

Has investing in CRISPR gene-editing stocks lost its appeal? You might think so based on the year-to-date performances of Editas Medicine, Inc. (EDIT -4.22%) and Intellia Therapeutics, Inc. (NTLA -5.54%). Editas has been hit especially hard.

In some ways, though, now is a better time than ever to bet on the promise offered by CRISPR. But which of these two biotech stocks is the smarter pick for long-term investors? Here's how Editas and Intellia stack up against each other. 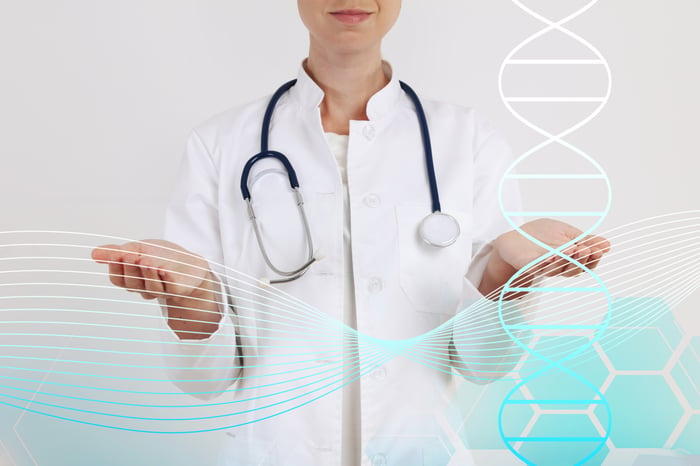 It's not easy evaluating the prospects for a preclinical-stage biotech like Editas Medicine. The good news for Editas is that it might not be only in the preclinical stage much longer. The company stated in August that it planned to submit its application request for FDA authorization to begin a phase 1 clinical study of CRISPR gene-editing therapy EDIT-101 in treating Leber congenital amaurosis type 10 (LCA10) in October.

Of course, it's not easy to evaluate the prospects for a clinical-stage biotech, either. However, there are quite a few things to like about Editas.

The biotech checked off all the boxes for EDIT-101 in preclinical testing. It was able to successfully delete the mutation that causes LCA10 in cells from patients with the disease. Testing in nonhuman primates went very well with no off-target mutations detected. And Editas appears to have a solid method of delivering its CRISPR gene-editing therapy using the adeno-associated virus type 5 (AAV5) vector.

Editas also attracted the attention -- and money -- of Allergan. In August, the big drugmaker exercised its option to develop and market EDIT-101 globally for the treatment of LCA10. Editas also exercised its option to co-develop and split the profits from the therapy in the U.S. Allergan paid Editas $15 million up front with another $25 million potentially on the way if the FDA accepts the investigational new drug (IND) application for EDIT-101.

LCA10 is a smart first target for Editas. It's the most common cause of genetic childhood blindness and impacts between 2,000 and 5,000 patients in the U.S. and Europe. The biotech is also pursuing the use of CRISPR gene editing in other eye diseases. Usher syndrome type 2A is at the top of the list. There are 4,000 patients with the target mutation. Editas Medicine's approach for the disease is similar to the one adopted with LCA10.

Although it's rare, ATTR still impacts around 50,000 patients worldwide. There is currently only one approved treatment for the disease -- Alnylam's Patisiran. ATTR is typically fatal within two to 15 years after the first symptoms appear.

The approach being taken by Intellia with ATTR lends itself to treating other liver diseases as well. Intellia expects to soon move forward with testing in nonhuman primates for a second to-be-announced liver indication.

Meanwhile, the biotech is working with another big partner on an ex vivo (out of the body) therapy. Novartis and Intellia anticipate identifying the first hematopoietic stem cell target from their collaboration in the near future. The two companies are also researching the use of CRISPR gene editing in developing chimeric antigen T cell receptor (CAR-T) therapies to fight cancer.

Intellia's first ex vivo candidate, though, is likely to come from its collaboration with Italian university and research hospital Ospedale San Raffaele. The two organizations previously announced the identification of T cell receptors (TCRs) targeting Wilms' Tumor 1 protein (WT1) for the treatment of acute myeloid leukemia. The WT1 target could also lead to therapies for treating other solid tumors and blood disorders.

Both Editas and Intellia have promising candidates. They both have partnerships with major drugmakers. They're both leading pioneers in the field of CRISPR gene editing. But which of these biotech stocks is the better buy?

I think that Editas gets the nod for two reasons. First, it's further along in development. The company could potentially begin clinical testing of EDIT-101 in treating LCA10 next year if the FDA approves the therapy's IND. Intellia will likely be at least a year later getting to the clinic.

Second, my view is that Editas' relationship with the Broad Institute gives it a leg up from an intellectual property perspective. The U.S. Court of Appeals recently upheld a U.S. Patent and Trademark Office decision that reaffirmed the strength of the Broad Institute's CRISPR patents. Editas holds the exclusive license to several of these patents.

However, Editas Medicine -- like Intellia Therapeutics -- is a very risky, speculative stock. It's still really early for the company's programs. Other researchers have already identified several potential risks linked to CRISPR gene editing. Buying Editas is a bet that could pay off in a big way if the company's CRISPR therapies are successful, but at this point, it's definitely a bet.