Please ensure Javascript is enabled for purposes of website accessibility
Log In Help Join The Motley Fool
Free Article Join Over 1 Million Premium Members And Get More In-Depth Stock Guidance and Research
By Lou Whiteman – Nov 3, 2018 at 8:57AM

There are a lot of moving parts within this massive chemicals company. Is there a solid investment hiding behind all the noise?

DowDuPont (DD -1.58%) had been one of the worst performers in the Dow Jones Industrials prior to its Nov. 1 earnings announcement, having fallen 24% year to date and ahead of only IBM among the average's components. Its third-quarter results, however, helped current investors gain back some of what they'd lost, with shares climbing more than 8% the day of the announcement.

The chemicals giant, formed from the $130 billion merger between Dow Chemical and DuPont in September 2017, reported $0.74 in earnings per share, beating estimates by $0.03, on revenue that, at $20.1 billion, missed expectations by about $100 million. The company, which reported strong demand in its cosmetics, plastics, and paints divisions, also said it intends to repurchase $3 billion in shares over the next five months. DowDuPont is a complex company to follow right now, caught up in a series of mergers and spin-offs that management says will eventually create three more-nimble entities better able to capitalize on growing global demand for its products.

Is now the time for investors to jump in? Here's a look at where things stand at DowDuPont, to try to determine whether the company is a good buy today.

Dow and DuPont came together under activist pressure in 2017 with a plan to combine the best of both portfolios and then create three streamlined entities. If all goes according to plan, by June 2019 current shareholders should expect to own shares of three separate publicly traded companies: Corteva Agriscience, the combination's farm-focused unit; a rechristened Dow, which will house the combined materials-science business; and a new DuPont, which will contain the companies' specialty-products units.

The ag business is about half crop-protection products and half seeds, with a presence in more than 130 countries. Specialty products makes advanced electronics and imaging materials, construction fibers, nutritional supplements, and advanced polymers for a range of industries, while materials sciences is a manufacturer of ethylene, propylene, and silicones used in consumer, packaging, and industrial segments.

Corporate engineering is notoriously difficult, but DowDuPont has a well-regarded pilot navigating its split. CEO Ed Breen arrived at DuPont in 2015 after rescuing conglomerate Tyco International from near-collapse after Tyco chairman and CEO Dennis Kozlowski and other officials were accused of fraud. Breen stabilized Tyco before eventually splitting it into three businesses, later further splitting the unit he stayed with into three independent companies.

DuPont's situation was not nearly as dire when Breen arrived, but the executive, as well as activist shareholders including Nelson Peltz, saw the company as bloated and stagnant in key areas. Breen spearheaded the megamerger with Dow Chemical, and intends to cut the combined company's annual costs by $3.6 billion leading up to the three-way split.

But the split plan has come under some criticism. Another activist, Dan Loeb of Third Point LLC, suggested last year that carving the company into six pieces would create the most shareholder value. And investors should expect continued portfolio trimming long after the split becomes official, with the soon-to-be-DuPont nutrition business a likely stand-alone candidate.

Some of DowDuPont's underperformance this year is attributable to issues beyond the company's control. DowDuPont in mid-October took a massive $4.6 billion impairment charge related to goodwill and other assets in its agriculture unit, saying the business would not live up to cash flow projections due to "lower growth in sales and margins in North America and Latin America" and unfavorable currency exchange rates.

The threat of a trade war could further impact ag earnings. China has placed a 25% tariff on U.S. soybeans, one of the most important American export crops, and if trade issues linger or escalate, it could cause farmers both in the U.S. and in South America to rethink their crop-planting plans and in turn disrupt DowDuPont projections on what seeds and nutritional products will sell in various regions.

DowDuPont Chief Financial Officer Howard Ungerleider on a post-earnings call with investors said the company doesn't expect tariffs to have a material impact on any of its businesses in the fourth quarter. Beyond that, it's hard to predict.

It's tough to get a handle on DowDuPont's value in its current expansive state with so many moving parts, a point brought home by last month's $4 billion-plus impairment charge. Stacked up against other large chemicals companies, DowDuPont doesn't seem cheap. Yet it seems likely that the shares are suffering from at least some sort of a conglomerate discount that should be unlocked by mid-2019. 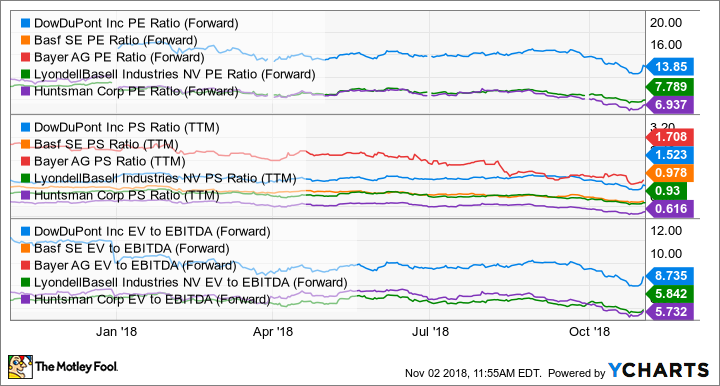 The DowDuPont portfolio is stacked full of attractive assets, and long-term holders are unlikely to lose their capital buying in now and riding out the splits. But given the sheer size of the task at hand, it's hard to just assume there is no future major impairment charge or other unexpected negative that will come out between now and next June.

Couple the risk of the unknown with the fact that this is a cyclical business riding what is now nearly a decade-long economic upswing, and it's evident that now is not the time to buy into DowDuPont. By this time next year, investors will have a chance to cherry-pick between the ag business, the specialty-products business, and the materials company based on how the global economy is performing and knowing how the ag business was impacted by tariffs.

Ed Breen's long-term vision makes sense, but I'm staying on the sidelines until the corporate-engineering job is complete.

Why Shares of DowDuPont Dropped 20% in May