Please ensure Javascript is enabled for purposes of website accessibility
Log In Help Join The Motley Fool
Free Article Join Over 1 Million Premium Members And Get More In-Depth Stock Guidance and Research
By Adam Levy - Nov 3, 2018 at 11:00AM

T-Mobile continues to grow its subscriber base, but what's behind those numbers?

T-Mobile (TMUS 0.84%) reported its third-quarter earnings results earlier this week, and the market liked what it saw from the wireless carrier. Revenue and earnings both beat expectations, and total branded net additions were 1.6 million, nearly half of which were highly coveted postpaid phone subscribers.

T-Mobile's business continues to attract new customers quarter after quarter, but there are two metrics in its postpaid phone business worth closer attention: the company's churn rate, which fell to a record low for the third quarter, and its average revenue per user, which also declined. 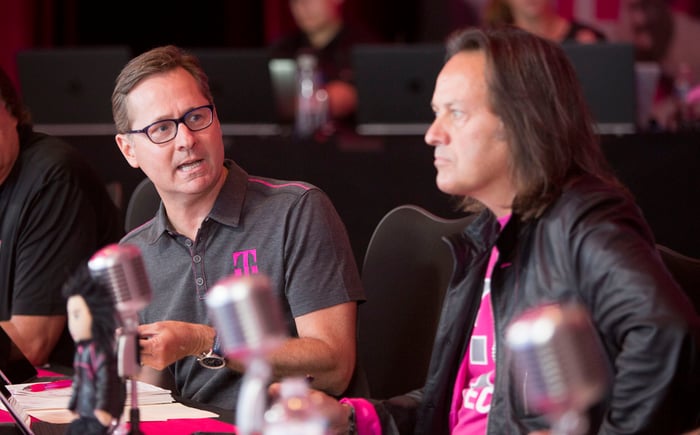 T-Mobile has done an excellent job in improving customer loyalty. Its postpaid phone churn rate, the percentage of customers who cancel their subscriptions, fell 21 basis points year over year in the third quarter, to 1.02%. T-Mobile was the only carrier between itself, AT&T (T 1.84%), and Verizon (VZ -2.17%) to improve its churn rate year over year. It did the same last quarter.

However, T-Mobile's churn rate still sits well behind both its two largest competitors. AT&T posted a postpaid phone churn rate of 0.93%, and Verizon's was even better, at 0.80%.

The question for investors, then, is why is T-Mobile's churn rate so much higher?

"At the end of the day, churns are function of the network, first and foremost," COO Mike Sievert told investors on the company's third-quarter earnings call, continuing:

It's a function of the customer experience and we are differentiated there with Team of Experts in a very significant way. It's a function of the brand and what it feels like to be a part of the company that puts customers first and treats them right and you can see that as a leading indicator in our net promoter scores.

Basically, he sees no good reason T-Mobile won't eventually show a churn rate on par or better than AT&T and Verizon's.

What Sievert left out is that AT&T and Verizon both benefit from greater penetration of lower-churn markets, including the business and enterprise market as well as more rural markets (where there are fewer competitors). T-Mobile is making progress in both of those areas as it expands its network coverage and starts marketing toward particular customer segments. As it makes further inroads with those markets and continues improving its service for existing customers, churn ought to keep falling.

Is lower churn coming at the cost of prices?

T-Mobile saw its average revenue per user fall to $46.17, down 1.6% year over year. That's well outside of its guided range of "generally stable ARPU," which management defines as plus or minus 1%. That said, management reiterated that guidance for the full year, so CFO Braxton Carter pointed out "that will tell you, when you do the math on it, that ARPU is going up in Q4."

T-Mobile has taken few steps to increase pricing on its wireless plans. In fact, it may have taken more steps to lower pricing for customers over the last year than vice versa, with discounts for couples 55 and older, military members, and regular promotions along with its promise never to increase existing customers' bills and include the taxes.

Verizon, meanwhile, has rolled out some customer-friendly pricing with the option for families to each choose various plans and still get a bundling discount. AT&T, on the other hand, has increased pricing but offers customers tons of extras (whether they want them or not).

Investors should keep an eye on T-Mobile's ARPU to ensure it stays within the guided bounds. Even if it's a bit below those bounds, investors shouldn't get too worried as long as T-Mobile continues to add customers. It's more important for T-Mobile to scale its customer base than it is to increase their monetization, as scale allows it to fully leverage its high fixed costs of operating a nationwide network to the same degree as its larger competitors.

If lower prices help attract new customers and retain them, it's not worth fretting over a few basis points. Ideally, though, investors would like to see increasing ARPU and declining churn.