There's a lot of growth in the future for this genomic-sequencing pioneer.

There's no question about where Illumina, Inc. (ILMN -0.30%) stands today. The company is the undisputed leader in genomic sequencing. Illumina recently reported its highest sequencing instrument sales in years thanks to new products introduced in 2017 and 2018. And despite its share price falling in the midst of the broader market pullback, Illumina stock is still up close to 40% so far this year.

But what does the future hold for Illumina? Here's where the company could be in 10 years. 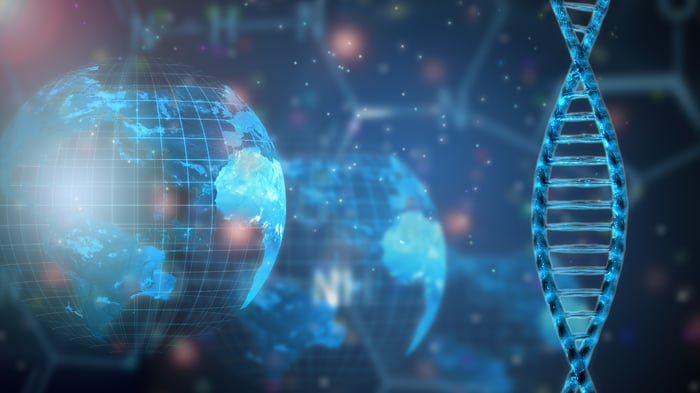 A much bigger market

Illumina generated revenue of $2.75 billion last year, and the company is on track to make around $3.3 billion in 2018. Within the next 10 years, Illumina's market should be much bigger. It doesn't require a stretch of the imagination to see the company pulling in annual revenue of $13 billion or more by 2028.

One key to expanding the market size is in reducing the costs of sequencing. Illumina thinks its NovaSeq platform will enable it to lower the sequencing cost per genome from around $1,000 today to close to $100 in the future. The company's experience has been that reducing the average cost opens up the market significantly, allowing its overall revenue to grow.

Direct-to-consumer (DTC) genomics, such as the services offered by companies like Ancestry, 23andMe, and Helix, presents another huge opportunity. Most of the growth in this market so far has stemmed from U.S. customers interested in genealogy. But Illumina CEO Francis deSouza noted on the company's Q3 earnings conference call that "we're starting to see DTC become a more global story than it frankly has ever been." What's more, customers aren't just focused on genealogy now; they're also interested in health-related genetic attributes.

Illumina should also continue to see significant growth in non-invasive pregnancy testing (NIPT). More payers are covering for NIPT in average-risk pregnancies than before. Additional international markets are also opening up for Illumina's VeriSeq NIPT technology.

Oncology appears to be one of the biggest opportunities for Illumina. Several companies, including Illumina's spin-off Grail, are racing to develop liquid biopsies to detect cancer at very early stages. If these efforts succeed, the market for genomic sequencing could explode.

Oxford Nanopore has attracted the attention of at least one big biotech: Amgen recently announced an equity investment in the privately held company. Oxford Nanopore focuses on long-read sequencing, which offers some advantages over short-read sequencing. Genomic sequencing is a bit like putting together a jigsaw puzzle; long reads allow researchers to have fewer puzzle pieces to assemble than short reads.

Chinese sequencing leader BGI has publicly stated that by 2020, it plans to offer human whole-genome sample sequencing in less than 24 hours and at a cost less than $300. BGI can already perform high-throughput sequencing for close to $600.

Does the increased competition threaten Illumina? Not necessarily. The quality and reliability of its products and services continue to stand above the pack. Long-read sequencing is often a complementary market to Illumina's short-read sequencing. Customers might perform initial genomic sequencing using long reads, but then turn to Illumina's products and services for higher-scale production.

More importantly, Illumina just announced plans to acquire Pacific Biosciences of California. This deal gives the company a strong product in the long-read sequencing market. It also underscores how easily Illumina can use its large cash stockpile and significant cash flow to make acquisitions that help preserve its front-runner status in the genomic-sequencing industry.

The sequencing market should expand impressively over the next few years. Illumina will continue to enjoy solid growth as more customers transition to NovaSeq, and new products like iSeq will make sequencing available to smaller customers. Illumina's recurring revenue from consumables should allow the company to invest even more in research and development -- and potentially in strategic acquisitions like the recently-announced PacBio deal.

There's no way to know for sure where Illumina will be in 2028. However, the best bet is that the company will still be the one to beat in the genomic-sequencing market 10 years from now, and well into the following decade.