Nothing to worry about after the biotech received a much-needed FDA approval last week.

Shares of AcelRx Pharmaceuticals, Inc. (ACRX 5.61%) were down 10.2% as of 11:20 a.m. EST on Monday. The biotech didn't have any new developments. Instead, it appears that some investors took profits off the table following AcelRx's big jump last week after the U.S. Food and Drug Administration (FDA) approved opioid pain drug Dsuvia.

Today's decline should be taken with a grain of salt. Nothing has fundamentally changed for AcelRx since Friday, when the company announced FDA approval for Dsuvia. 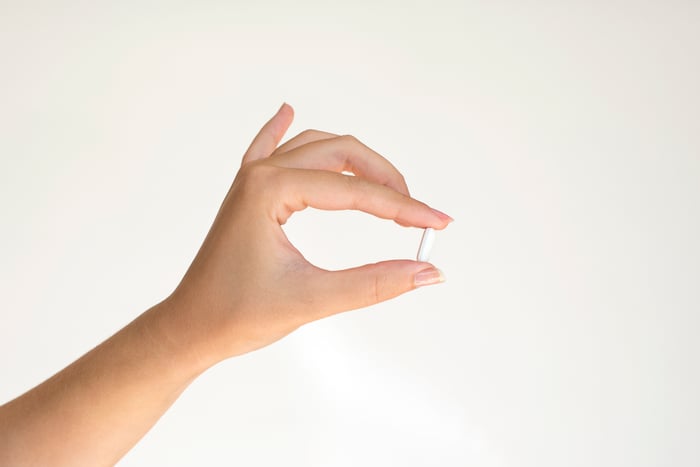 It's true that the approval attracted a lot of media attention because of worries about the opioid epidemic in the U.S. Such concerns initially helped derail AcelRx's drug last year. Although the biotech presented solid data from a couple of phase 3 clinical studies in its approval application for Dsuvia, the FDA opted against approval because of potential safety concerns.

However, AcelRx cleared the regulatory hurdle this time around -- primarily due to its risk mitigation proposal for Dsuvia in which only qualified healthcare professionals can administer the drug. This approach should significantly reduce the potential for abuse of the opioid drug.

Despite the controversy, the availability of Dsuvia is likely to be applauded by many physicians. Oral and intravenous opioid painkillers that are currently used can be slow to take effect and difficult to appropriately dose and administer. As a single-dose tablet, Dsuvia gives healthcare professionals a convenient way to quickly reduce pain in postoperative patients.

AcelRx stock could continue to exhibit volatility for a while to come. The company won't launch Dsuvia until the first quarter of 2019. However, cash shouldn't be a problem for AcelRx since it raised $21.7 million in gross proceeds from a stock offering in the third quarter.

Investors will want to watch for any key updates from AcelRx during its investor day, which is scheduled for Dec. 11, 2018. The biotech plans to seek approval in Europe for Dsuvia. In addition, AcelRx hopes to win FDA approval for its second opioid drug, Zalviso, on a second attempt as well. Although Zalviso is approved in Europe, the FDA gave a thumbs-down in 2014.

AcelRx thinks Dsuvia will generate peak annual sales of $1.1 billion. With the company's market cap currently below $300 million, the stock could still have plenty of room to run even if that target is overly optimistic.