AcelRx Pharmaceuticals and Sundial Growers could both be poised for a major growth spurt.

Penny stocks, or stocks with sub-$5 share prices, are rarely worth considering as a long-term investing vehicle. Most of these equities sport depressed shares prices for a very good reason, after all. Low-priced equities, however, can on the rare occasion yield life-changing returns on capital. More than a few former penny stocks in the capital-intensive healthcare sector, for instance, have beaten the odds to go on to become tremendous wealth escalators for their early shareholders.

Which healthcare penny stocks should the risk-tolerant crowd have on their radar right now? AcelRx Pharmaceuticals (ACRX 4.07%) and Sundial Growers (SNDL -1.99%) are two potential diamonds in the rough. Here's a brief rundown on the risks and possible rewards associated with each company. 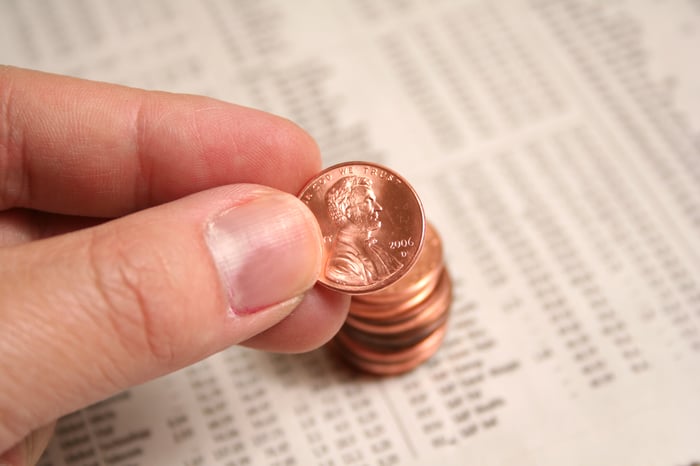 1. AcelRx: A potential game changer in the acute pain space

AcelRx Pharmaceuticals' growth story centers around its novel alternative to IV opioid drugs in the acute pain setting. The drug, known as Dsuvia, is a sublingual (under the tongue) formulation of the powerful synthetic opioid sufentanil. Dsuvia is delivered via a single-use applicator and restricted to medically supervised settings to limit the potential for diversion. The core idea is to provide hospitalized patients with faster and longer-lasting pain relief, thus reducing the total amount of opioids taken during a bout of acute pain.

Despite the drug's promise as an alternative to highly addictive IV opioids, though, Dsuvia's adoption rate has been underwhelming thus far. Since its commercial launch approximately two years ago, AcelRx has booked less than $5 million in cumulative sales for the drug. The painkiller's sluggish sales trajectory may be about to pick up in a big way, however. Two key catalysts are possibly set to underpin a huge uptick in Dsuvia's sales in 2021 and beyond.

First off, AcelRx announced late last year that Dsuvia will now be included in all Army sets, kits, and outfits for deployed troops following a Milestone C approval from the Department of Defense (DoD). That deal alone is expected to be worth up to $30 million over the next three years, according to the company. Second, the biotech recently inked a promotional deal with Zimmer Biomet Dental to distribute Dsuvia for use during oral and dental surgery. While the details of this expansion plan are still hazy, AcelRx believes that the addressable market for dental surgeries exceeds 7 million procedures per year.

What are the risks? Apart from the DoD, AcelRx has yet to truly nail down another major market for Dsuvia. As a result, it remains to be seen whether this drug will ultimately become part of the standard of care for patients with moderate to severe pain. And if it doesn't, AcelRx's stock will surely stagnate while the company slowly brings other potential revenue streams online. What's more, AcelRx may have to rely on serial dilution simply to keep its doors open.

What's the upside? Not long ago, Dsuvia was billed as the next blockbuster pain medication due to the massive size of its addressable market, combined with the well-documented need for viable alternatives to IV opioids in the acute pain setting. While Dsuvia may never realize the $1 billion in annual sales as some had hoped prior to its formal launch, there is still a decent chance that the drug will eventually gain enough momentum to rake in at least a few hundred million per year. That's a rather healthy revenue stream for a company with a market cap of $200 million at the time of writing.

2. Sundial: A deal may be brewing for this pot company

Canadian pot company Sundial Growers has seen its stock more than quadruple in value since releasing its fiscal third-quarter earnings report last November. The company's stock caught fire over this short period for two clear-cut reasons. First and foremost, pot stocks in general have been experiencing a renaissance of sorts since the U.S. presidential election on the hope that democrats -- who now control both Congress and the executive branch -- will push through major reforms on the legal status of cannabis.

Second, Sundial's braintrust announced during its third-quarter earnings release that it was exploring a broad range of strategic alternatives, including a potential sale of the company, a merger, or an investment in another Canadian pot company. Since then, Sundial has significantly bolstered its cash position, perhaps in a prelude to a sizable deal.

What does this all mean? Sundial, like most of its Canadian peers, is in a tough position. The marijuana industry in Canada has been going through a host of growing pains since legalization, including but not limited to dramatic price compression, a slower-than-expected pace of legalization in key geographies like the U.S., and fierce competition from both licensed producers and black-market dealers. Sundial's task, therefore, is to navigate these turbulent waters by either finding a buyer or dramatically boosting its revenue by buying a peer. Either way, the company's stock could surge higher in response to the right deal.

What's coming down the pike? Now that Sundial's market cap has swelled to nearly $2 billion, the company no longer appears to be a serious acquisition target. That means that Sundial will likely be the acquirer in any potential deal. The good news is that there are a handful of intriguing buyout targets in this high-growth space. The bad news is that there aren't any targets within the pot company's modest price range that would significantly boost its top line right out of the gate. So, the logical next step for Sundial -- and perhaps the fastest way to create value for shareholders -- would be to merge with one of the Canadian pot titans.

What's the risk? Sundial's stock is currently trading at an astronomical 30 times 2021 projected sales following this recent run-up. So, if a merger or a compelling acquisition isn't announced soon, this high-flying pot stock could fall on hard times.