Please ensure Javascript is enabled for purposes of website accessibility
Log In Help Join The Motley Fool
Free Article Join Over 1 Million Premium Members And Get More In-Depth Stock Guidance and Research
By Rick Munarriz – Updated Jan 8, 2019 at 11:44AM

Social media is fired up about a rumor that the regional amusement-park operator is looking to buy some or all of SeaWorld, but it's not likely to happen.

The internet is where wishful thinking is amplified into rumor-mill chatter, and we saw that in action on Tuesday afternoon with reports that Six Flags (SIX -2.37%) was initiating talks to acquire SeaWorld Entertainment (SEAS -1.49%). Some coaster-enthusiast sites and several personal social-media accounts began discussing the potential pairing, which for now seems highly unlikely to happen.

We've been here before when the chatter had more legs. Bloomberg turned heads 13 months ago when it reported that Legoland operator Merlin Entertainment Plc had approached the marine-life-themed park operator about acquiring its two Busch Gardens theme parks. Merlin itself had mentioned an interest in the two parks, but nothing ever bubbled up to the surface.

There's less meat on the bone this time, but let's go ahead and dive into the many reasons why it's just not going to happen. To be fair, I'll wrap things up with a big reason why it should happen. 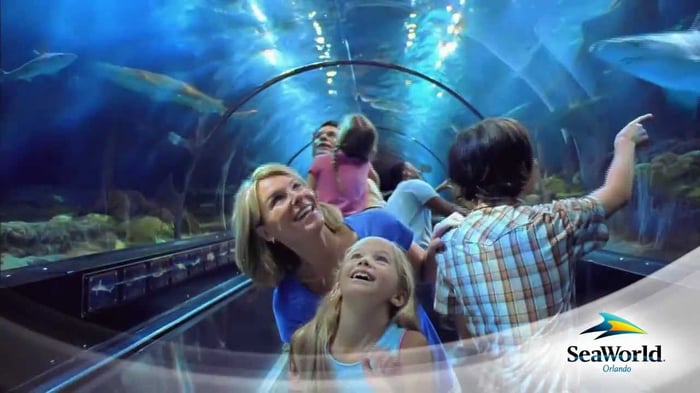 1. SeaWorld is on the rise

SeaWorld was on the ropes last year. It kicked off the year by suspending its once-beefy dividend, shooing away income investors. Revenue was falling for the fourth consecutive year. Its CEO at the time was coming under fire for failing to execute the attendance turnaround that he was brought in to do. SeaWorld and its shareholders would've been receptive to an exit strategy in that rocky climate, but it's a different world -- a different SeaWorld -- now.

Revenue is finally rising for the first time since the company's 2013 IPO. The stock is one of this year's biggest winners, up 88% so far in 2018. It's not impossible to buy an appreciating asset, but it takes a lot more money to convince a company's board and ultimately its shareholders to cash out when the going is good without offering a huge premium. This brings us to our next point, and it's on Six Flags' end.

Six Flags commands twice the enterprise value and more than double the market capitalization of SeaWorld, but both companies are leveraged beasts. Six Flags has more than $2 billion in debt on its books and would be taking on more than $1.5 billion in debt by swallowing SeaWorld whole.

Six Flags doesn't have a lot of financial flexibility to cut a check for the $5 billion or so enterprise value price tag that SeaWorld would command in a buyout at this point. It's committed to a beefy dividend to its stakeholders that limits its ability to buy anything other than small regional outfits.

SeaWorld investors would balk at an all-stock deal, especially since Six Flags is going the wrong way at the moment. Six Flags stock has fallen nearly 10% this year, taking a nasty tumble just two weeks ago following a disappointing quarterly report. It's hard to strike a stock deal when you're buying an asset on the rise with weakening currency.

The dream scenario for fans is that buying a pass to any of the combined parks' properties would be accepted at any of the other properties. Six Flags prides itself on cheap season passes where someone can access all of the chain's parks in any given calendar year for less than $100. I paid just $68 for my Six Flags pass this year -- and added $93 for a dining pass that included lunch, dinner, snacks, and unlimited soft drinks for the entire season. SeaWorld charges as much as $360 for a pass that includes access to all 11 of its attractions and quickly abandoned its season dining pass last year.

Six Flags won't kill the SeaWorld cash manatee by letting its deeply discounted season-pass holders get into SeaWorld, and the value proposition won't make sense going the other way. The obvious solution is to continue operating the franchises independently, but then what's the point of going broke in the acquisition process?

This deal isn't going to happen, but the story doesn't end here. Come back this weekend when I'll be back as devil's advocate to this piece and argue why the rumored pairing makes too much sense to ignore.