The cost of that sheepskin isn't getting any cheaper.

The average cost of tuition and fees for private colleges this year is $34,740, while the cost of tuition tends to rise about 8% annually. That means the price of a college education doubles every nine years. Can you think of a better reason to invest?

To help you choose stocks that could help you meet those ever-rising expenses, we asked three Motley Fool contributors for their best bets. Educate yourself on why Tesla (TSLA -5.83%), Republic Services (RSG -2.53%), and Walmart (WMT -2.09%) represent some of the best opportunities to give you the money to help send your kids to college. 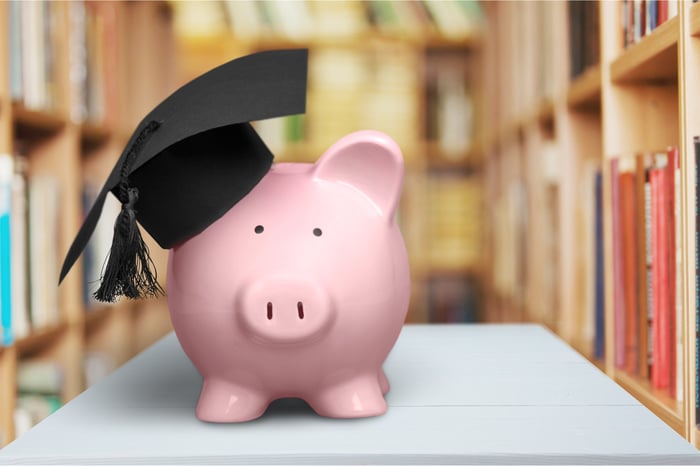 Saving the world, one electric car at a time

Anders Bylund (Tesla): You wouldn't know it by looking at Tesla's market performance in recent months, but the electric-car company is on the verge of a massive makeover. I'm convinced that the kids will be talking about Tesla several decades down the line, but they won't think of it as a car company at all.

The Tesla we know today collects 89% of its quarterly sales from electric vehicles. Solar panels, large-scale battery packs, and services for all of the aforementioned products added up to 11% of the third quarter's $6.8 billion top line. Ramping up the production volume of the relatively affordable Tesla Model 3 car is next on the agenda, positioning the company to grow its cash flows and start showing positive bottom-line earnings. Upcoming big-rig trucks should help Tesla stick to those goals for the next few years.

That's a good start, but Tesla was never meant to sell cars for a living. The real long-term ambition is much larger and more important. CEO Elon Musk basically wants to save the world by getting everybody out of the oil-based energy habit. Solar power and other sustainable energy sources -- some perhaps not yet invented -- will eventually have to take over from the century-plus reign of petroleum-based energy supplies. Musk just wants to accelerate that transition, making Tesla both a driver and a beneficiary of that revolution.

"By definition, we must at some point achieve a sustainable energy economy or we will run out of fossil fuels to burn and civilization will collapse," Musk wrote in 2016. "Given that we must get off fossil fuels anyway and that virtually all scientists agree that dramatically increasing atmospheric and oceanic carbon levels is insane, the faster we achieve sustainability, the better."

It's true that Tesla already sports a $54 billion market cap and annual revenue in the $14 billion range. But that's peanuts compared with today's leading oil producers, many of whom boast sales 10 or 20 times Tesla's annual sales, as well as far larger market caps.

So Tesla's stock should be quite capable of helping you send the kids to college in a decade or two. Beyond that, the grandkids might find their favorite school under water if Tesla's vision fails.

John Bromels (Republic Services): When the stock market drops, or the economy goes south, people might put off some big purchases or try to drive less to save on gas, but one thing they're always going to do is create trash. And that's why trash hauler and landfill operator Republic Services is a company whose services will be in demand whether your kids are in diapers or the dorm.

Business has been booming lately at Republic Services. The company just released its third-quarter earnings, and as expected, quarterly earnings increased by 22% year over year, thanks in large part to the corporate tax law changes (which have, naturally, helped Republic's bottom line every quarter this year). Revenue was up very slightly -- by less than 1% -- and free cash flow increased by 17% year over year.

Better yet, management expects this solid growth to continue even after the impact of the tax cuts is in the rearview mirror. In a press release, CEO Donald Slager predicted "strong top-line growth" in 2019, as well as double-digit growth in earnings and free cash flow per share. In spite of all this projected growth, the market -- still reeling from its recent correction -- yawned at the news.

But with shares down more than 7% over the past month, and with a dividend that's currently yielding more than 2%, now may be an excellent time to pick up shares of this strong company with a solid business model.

Learn to trust in stability

Rich Duprey (Walmart): A stock to pay for college should be one that is stable, is steady, and has a high probability of being around in 15 to 20 years, when you're going to need the cash to pay for tuition. It should also provide a good chance of both capital appreciation and dividend growth. Having an income component to the stock ought to increase the likelihood you'll have sufficient financial resources at your disposal when needed.

A stock like Walmart comes to mind. It's been around for 50 years and should be here for at least 50 more. It is posting solid sales and earnings growth and has proved more than adept at meeting the challenges of online commerce. In fact, it is expected to surpass Amazon.com to become the online grocery leader this year. Not bad for the largest retailer and its $282 billion market cap.

When it comes to its dividend, which currently yields a sturdy 2.1%, it has paid shareholders for over 40 years and has raised the dividend every year. Better still, with only 34% of its free cash flow going for dividends, Walmart has a large safety net to continue raising the payout.

The retailer isn't a bargain-basement stock, but trading at 17 times its free cash flow, it is appropriately valued, which makes it suitable for a stock you're going to be putting away for some time while receiving dividend payments that you'll use to help your child get that sheepskin.