Please ensure Javascript is enabled for purposes of website accessibility
Log In Help Join The Motley Fool
Free Article Join Over 1 Million Premium Members And Get More In-Depth Stock Guidance and Research
By Keith Noonan - Nov 7, 2018 at 5:00AM

Find out why the video game publisher's surprise new game is one of its most controversial titles ever.

Activision Blizzard's (ATVI 1.90%) three major divisions -- Activision, Blizzard, and King Digital -- share some development and management resources, but generally operate with a high degree of independence. Each year, the Blizzard division hosts its own conference to spotlight new games, updates to existing titles, and other upcoming features and projects.

The BlizzCon conference isn't always a source of huge news, but this year's show saw the company announce a controversial new title in addition to content expansions, reworkings, and remakes for games in big franchises. Read on for a summary of the most important bits for investors. 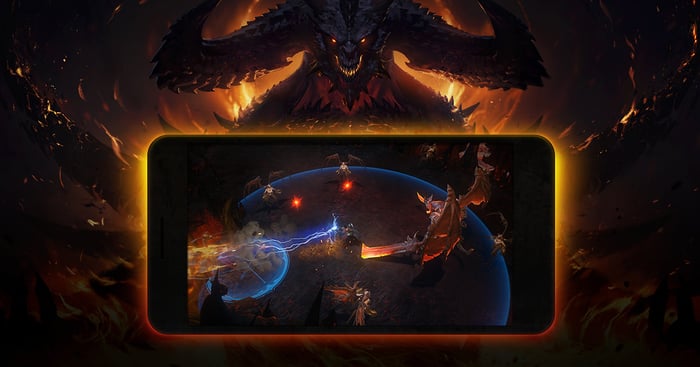 Diablo Immortal is a promising and controversial new game

Diablo used to be one of Blizzard's top franchises, but despite an ultimately successful performance after a rough launch period for the series' 2012 release, Diablo III, it's fair to say that the property has been somewhat underutilized recently. That's set to change with Diablo Immortal, a massively multiplayer online role-playing game (MMORPG) for Android and iOS platforms. Like earlier games in the series, Immortal will see players teaming up to explore dungeons, conquer enemies, and collect equipment to boost their characters' stats and abilities, but it marks the first time that the series will land on mobile.

Activision Blizzard is partnering with Chinese game developer and publisher NetEase (NTES 3.02%) for the game, which should have the effect of opening the title up to the world's biggest mobile market once the country resumes the certification for new games after the current, temporary suspension. Games from outside China typically require a Chinese publishing partner in order to be released in the country, and Activision Blizzard is clearly moving forward with that market in mind.

Diablo Immortal represents a promising step toward bringing more of the company's big franchises to mobile, and one that has the chance to be very successful -- though you might not guess it from how the game has been received. Early fan response to the title has been been decidedly negative, but much of this seems to be down to hardcore franchise enthusiasts who were expecting the announcement of a mainline sequel to Diablo III instead of a mobile game.

Blizzard typically develops games for PC, and BlizzCon is typically used to highlight upcoming games for the platform. Many hardcore PC gamers and Diablo fans aren't interested in the types of simplified gameplay experiences found on mobile, so it's not shocking that there's been vocal disappointment about the series' latest direction.

The upcoming mobile release has also received criticism for seemingly being built on a game previously released by NetEase, meaning that Immortal appears to reuse some development resources, design mechanics, and gameplay elements from an earlier title despite featuring a different art style and content. This has led to the game being labeled a "cash-in" in online discussion forums -- a critique that may not be totally unwarranted.

Immortal looks like a smaller-scale project than Blizzard fans are used to, is the product of a partnership with a Chinese studio, and is probably being designed to be more casual-friendly than the typical Diablo game. Put simply, it's probably not costing a ton to make compared to other Blizzard games, and it has the chance to be very profitable.

Individual series releases should also be looked at in the context of what they mean for the broader franchise, and Diablo Immortal is unlikely to make hardcore franchise fans less interested in a mainline sequel. Activision Blizzard hasn't announced a release date for Immortal, but investors can probably count on the game being a hit when it's ready for market, so long as it delivers a quality experience.

BlizzCon 2018 brought plenty of news on the Warcraft franchise front. Blizzard showed off new gameplay footage for World of Warcraft Classic -- a version of the company's hugely popular MMORPG that will revert the gameplay to the way it was when the game was first released in 2004 and be included with every standard World of Warcraft (WoW) subscription. WoW has been losing subscribers in recent years, but its longevity has still been impressive and the new option to switch back to the game's old style could help bring back some players. WoW Classic is due for release in summer 2019.

Warcraft is going back to its roots in more ways than one. Before Blizzard released the MMORPG, its Warcraft franchise primarily consisted of strategy games. Warcraft III, a 2002 release that was the series' last mainline installment, is getting an updated version that's due for release in 2019. Warcraft III: Reforged will feature updated, high-definition graphics and a new story mode.

Blizzard also debuted an upcoming expansion pack for Hearthstone, its digital card game set in the World of Warcraft universe. Hearthstone has demonstrated impressive staying power and proven to be a reliable sales generator for Activision Blizzard since its 2014 release. The new card set should help keep franchise fans playing and be a solid sales hit.

Destiny 2, a first-person shooter developed and published by the Activision side of the business and released last year, is now free to download on PC until Nov. 18. BlizzCon usually features only games from the Blizzard wing of Activision Blizzard, but the PC version of Destiny 2 was the first game published by Activision to be featured on Blizzard's Battle.net online gaming platform.

Activision's offering the game as a temporary free download highlights the fact that Destiny 2 hasn't performed to expectations, but the move could benefit the Battle.net ecosystem in a few ways. Making Destiny 2 free on PC for a limited time should bring in some new users to the game and to Battle.net. It could also encourage in-game item sales in Destiny 2 and other titles on Battle.net, open up crosspromotion opportunities, and encourage positive user sentiment about the platform.

Adding new characters and other fresh content helps keep players engaged and sales flowing after a game is released. That's a core part of Activision Blizzard's business model, so it wasn't surprising to see new characters for Overwatch, StarCraft 2, and Heroes of the Storm at this year's BlizzCon. Blizzard debuted a new, eight-minute Overwatch animated short that featured a character that will be added to the popular first-person-shooter game in the near future. Meanwhile, StarCraft 2 and Heroes of the Storm will each get updates and new player characters next year.

In addition to new game and content reveals, Blizzard also showcased new toys, apparel, and products featuring its video game characters. The company has been steadily ramping up its merchandising push in pursuit of the type of licensing opportunities common in the movie business, and had new product partnerships with companies including Lego, Funko, and Hasbro to reveal. Blizzard even showcased an Overwatch branded cereal, courtesy of a partnership with Kellogg.

Overall, BlizzCon 2018 offered up a couple surprising new game reveals and featured a lineup of upcoming content expansions that should help keep the company's core franchises chugging along. Diablo Immortal was the biggest news from the show and the most interesting product for investors to keep an eye on.