Here's why this biodiesel play, leading agriculture company, and e-commerce giant should be on your watchlist right now.

With earnings-season volatility in full swing, there are opportunities galore for long-term investors to find stocks to put on their radar. Whether it's earnings expectations, or hits and misses -- or geopolitical factors like those we're seeing in the U.S. right now -- all the market needs is one trigger to send stocks swaying either way.

Amid the mayhem, smart investors should know where to dip their fingers. These Motley Fool contributors believe Renewable Energy Group (REGI), Deere & Company (DE -1.19%), and Amazon (AMZN -3.62%) are three stocks worth watching right now; here's why.

Maxx Chatsko (Renewable Energy Group): Third-quarter 2018 results are in -- and the nation's largest biodiesel producer has now delivered profitable operations for the third consecutive quarter. While nine months is not a very long time, the details surrounding the potential milestone heighten the importance for Renewable Energy Group and its shareholders.

The stock was chronically undervalued for years, often trading at a fraction of book value. The reason was simple: Renewable Energy Group was dependent on government subsidies to reach profitable operations. Considering those government subsidies were allowed to expire in 2010, 2014, 2015, 2017, and now 2018, then retroactively reinstated each time (except for the current year), Wall Street essentially priced shares to account for the volatility. 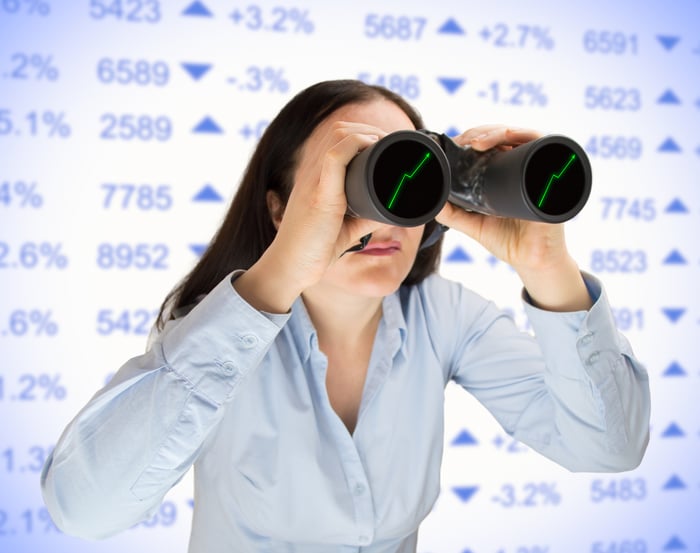 That hid the fact that Renewable Energy Group was successfully growing production volumes, lowering production costs, and expanding its nationwide logistics network. It began to show this year. The business has reported profitable operations for the first nine months of 2018 without any help from subsidies. That's forced Wall Street to account for Renewable Energy Group's impressive growth profile and ambitious expansion plans, sending shares 110% higher year to date.

Despite the gains, the stock still looks attractive on several valuation metrics, especially following a haircut of nearly 20% since third-quarter 2018 earnings were announced. Perhaps the strongest argument for investors to pay attention: Renewable Energy Group estimates it would receive a windfall of $179 million if federal tax credits for biodiesel are retroactively reinstated for 2018. All of that would be profit -- and it only accounts for operations for the first nine months of 2018.

Capitalize on this upcoming earnings report

Neha Chamaria (Deere & Company): Deere shares are bouncing back to life this month after a 10% drop in October, and that's likely to continue, with the farm and construction-equipment manufacturer set to report its fourth-quarter and full-year earnings on the morning of Nov. 21.

Deere is on solid footing right now. Robust replacement demand and increased adoption of advanced farm techniques, coupled with an uptick in activity in global construction markets, are boosting Deere's sales, as evidenced by the jumps of 32% in both revenue and adjusted net income that it reported for Q3. For the fourth quarter, Deere expects to have generated 21% higher revenue year over year. Not surprisingly, analysts on Wall Street are upbeat; they foresee a dramatic jump in Deere's full-year earnings to roughly $9.53 per share, from the $6.68 a share it made in fiscal 2017.

What investors would want to see this month: Deere's outlook for 2019, and whether it expects farm fundamentals to remain as strong. Signals coming in from the crop markets are mixed for now, with corn prices headed higher even as soybeans continue to tumble. Corn, however, remains a key crop, and higher prices translate into greater farm receipts, giving farmers more room to invest in the kind of heavier advanced agricultural machinery that Deere specializes in.

In a nutshell, it's time to watch Deere closely.

Sometimes the obvious choice is the right one

Chris Neiger (Amazon): It's easy to think that you need to invest in a young company, or one that's fresh off its initial public offering, to see big share-price gains. But sometimes the stocks you need to keep an eye on are the ones you already know about -- but haven't bought shares of yet.

Amazon's stock took a hit after it reported its third-quarter 2018 results at the end of October, and I think that dip offers an opportunity for long-term investors. Investors were concerned that Amazon's revenue growth slowed down a bit, compared to the first half of the year, and were disappointed with the company's fourth-quarter sales guidance -- but there's really not much to be worried about.

First off, Amazon still grew sales in the third quarter by 29% year over year, and by 23% if you back out sales from Whole Foods. That may be slower than some investors wanted, but getting upset over that would mean overlooking Amazon's massive earnings per share of $5.75 in the quarter, which far outpaced analysts' consensus estimate of about $3.14.

Additionally, some investors appear to be missing the company's growing opportunities given both its lucrative cloud-computing business, Amazon Web Services, and Amazon's newfound position as the third-largest digital ad sales platform in the U.S. The company is just getting started in both of these markets, and there's plenty of runway for Amazon to continue to benefit.

Even if Amazon's revenue growth slows a bit, that's no reason for investors to give up on this company. The e-commerce giant has been busy building out its Prime memberships, which lead to more retail sales; it dominates in the public cloud computing market; and it's a rising advertising player to boot. For investors looking to snatch up shares of Amazon, the recent share price dip may be a good time to make a move.

John Mackey, CEO of Whole Foods Market, an Amazon subsidiary, is a member of The Motley Fool's board of directors. Neha Chamaria has no position in any of the stocks mentioned. The Motley Fool owns shares of and recommends Amazon. The Motley Fool has a disclosure policy.