The transaction, which is the latest in a string of recent deals, will create one strong midstream company that's positioned to deliver sustainable distribution growth in the coming years. That makes it an even more attractive option for income growth seekers. 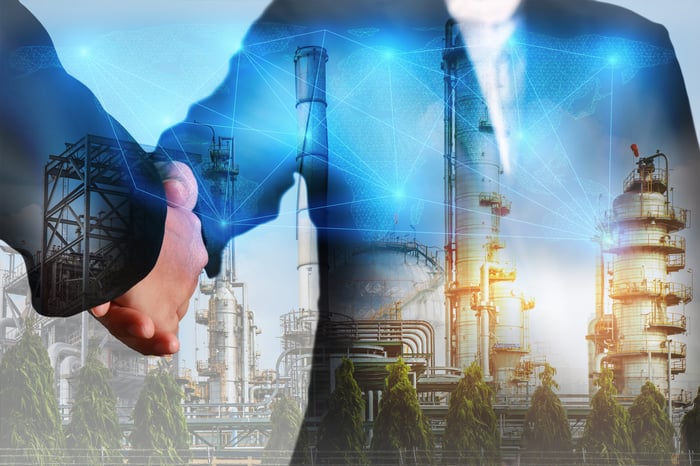 Western Gas Equity Partners plans to acquire Western Gas Partners in a unit-for-unit exchange at a price representing a 7.6% premium to the latter's closing price on November 7, which is noteworthy considering that units soared that day after voters defeated a proposal that could have affected its growth potential. With that uncertainty out of the way, Anadarko is making a move to consolidate its midstream interests and better position them for the growth it sees ahead.

In addition to merging its two midstream affiliates, Anadarko also plans to sell its remaining midstream assets to Western Gas for more than $4 billion, funded with 50% cash and 50% equity. These assets include oil and water gathering pipelines, interests in several gas processing plants, and its minority stakes in two long-haul pipelines.

The deals will boost Western Gas' cash flow per unit by 10% to 20% each year from 2019 to 2021. That will enable Western Gas Equity to increase its distribution to unitholders by 6% to 8% in 2019, while current Western Gas Partners' investors will see 1% to 2% growth in 2019. Meanwhile, going forward, Western Gas anticipates 6% to 8% annual distribution growth in 2020 and 2021. Further, it expects to deliver that growth while covering its payout with cash flow by at least 1.2 times in 2019 and by more than 1.3 times in future years.

What the transaction means for investors

These two transactions will transform Western Gas into a stronger midstream company that's better positioned to capture future expansion opportunities. One of the biggest improvements is the company's distribution coverage ratio, which will expand from a tight 1.0 times in the first half of 2018 up to a more comfortable 1.2 times in the next year before further increasing to more than 1.3 times in the future. That will put the company's high-yielding payout on a more sustainable footing while also providing it with more retained cash flow with which to fund expansion opportunities.

Speaking of growth, Western Gas sees ample opportunity in front of it to continue building out mission-critical midstream infrastructure to support the growth of Anadarko Petroleum in both the Delaware and DJ Basins. Western Gas currently estimates that it will invest $1.3 billion to $1.4 billion in 2019 on new capital projects to expand its midstream footprint, roughly on pace with the $1.35 billion to $1.45 billion it expects to spend this year. Meanwhile, it should be able to continue investing significant amounts of capital to grow its footprint in the coming years given that Anadarko plans to use those two regions as its main growth drivers. Those expansions should give Western Gas the fuel it needs to deliver on its distribution growth forecast.

Western Gas is both simplifying its structure while also acquiring the rest of its parent company's midstream assets in transactions that will transform it into one of the stronger midstream companies while improving growth prospects. That makes it a much more compelling option for income-seeking investors since the company's distribution will become increasingly more secure even as it continues expanding that payout.