The programmatic-advertising speedster stumbles despite another blowout quarter. Some beats are just better than others.

Sometimes, a blowout quarter isn't enough. The Trade Desk (TTD 2.61%) shares initially are moving lower after posting better-than-expected third-quarter results and boosting its full-year guidance on Thursday afternoon. It's an unfortunate break from tradition, as the fast-growing platform for programmatic advertising had seen its stock surge in each of its three previous quarterly outings.

Revenue rose 49.6% to hit a record $118.8 million in its third quarter. The Trade Desk was targeting just $116 million in the guidance for the period that it initiated after its blowout second quarter. Adjusted earnings before interest, taxes, depreciation, and amortization (EBITDA) rose 50%, to $36.8 million, an even bigger beat when pitted against the $30 million that The Trade Desk was modeling in its earlier outlook.

Net income and adjusted earnings nearly doubled during the quarter. Reported earnings soared 99% to hit $0.44 a share, while adjusted net income is clocking in 97% higher, at $30.2 million, or $0.65 a share. The Trade Desk doesn't offer up bottom-line guidance, but it's fair to say that it topped market expectations. 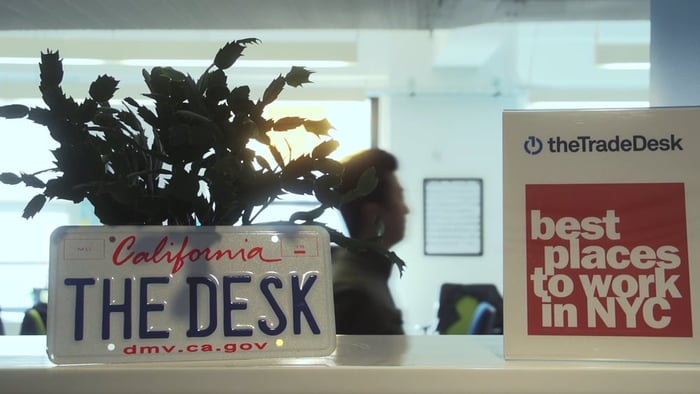 Marketers are turning to The Trade Desk's algorithm-fueled ad-buying platform. As spectacular as clocking in at nearly 50% top-line growth may seem, it's actually the data-driven speedster's second-weakest quarter in terms of revenue gains since going public 26 months ago.

The search for a post-earnings sell-off catalyst would naturally turn to The Trade Desk's guidance boost. If it was a limp boost -- by roughly the amount of the third-quarter beat -- it wouldn't be a surprise to see investors running for the hills. That wasn't the case.

The Trade Desk now sees revenue of $464 million for all of 2018, up from the $456 million goal it set three months earlier -- and an increase well beyond the third-quarter's $2.8 million beat. The Trade Desk sees revenue rising 43%, to $147 million, decelerating growth but still not the weakest top-line growth that the tech-based marketing-solutions provider has delivered in its short tenure as a public company. Adjusted EBITDA will move just 34% higher, to $53 million, but that's not necessarily a deal breaker.

The best excuse for the sell-off is the wind beneath The Trade Desk's wings. The stock has more than doubled in 2018, up a blistering 167% through Thursday's close. That's a lot of air for the company to live up to. It also doesn't help that it has smoked its earlier guidance by a lot more than it did in this week. The Trade Desk landed 9% ahead of its second-quarter guidance three months ago and a hearty 17% above its first-quarter outlook three months before that. A 2% beat this time around feels almost mortal, especially for a stock that has spoiled investors by nearly tripling year to date.

The Trade Desk continues to be a rock star -- post-earnings stock action notwithstanding. Customer retention has now checked in at 95% or better for 20 consecutive quarters.

The migration to programmatic advertising across various media channels finds marketers lining up for The Trade Desk's attention. It's in the right place at the right time, and sometimes, the market is hard to impress when every blowout financial performance isn't the same.