Though shares initially declined around 5% on the news, Travelport stock has all but recouped those gains in the days since. So, let's dig deeper to see what Travelport had to say about its start to the second half. 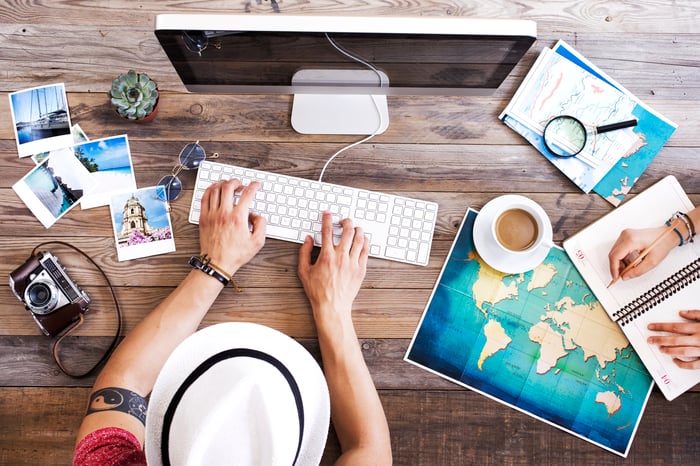 Travelport CEO Gordon Wilson sated that eNett growth helped the company "overcome the more challenging market and customer environment we anticipated for the second half of the year."

In the quarter, we continued to build the business in line with our strategy. Our Travel Commerce Platform delivered further business successes, especially in the regional corporate and online sectors where we are clearly benefiting from the investments we are making in the quality of our content and the capabilities and efficiency of our technology. We also strengthened our value proposition by concluding long-term deals to distribute the content of Air India and Jet Airways, in both cases as the preferred distributor. These add to our exclusive distribution contract with IndiGo and give us significant additional advantage in India and key markets beyond it. Furthermore, Travelport made history by becoming the first GDS to transact the booking of flights using IATA's New Distribution Capability (NDC) API protocol. These initiatives will contribute to the onboarding of new business next year, alongside the continued growth of eNett.

Despite these factors and our ongoing focus on the efficiency of our cost base, our business momentum is being tempered by some specific customer headwinds. We remain well positioned for longer term profitable growth given our commercial wins and the ongoing investments we're making in the key areas that differentiate us, including our industry-leading travel content; our search, merchandising and shopping capabilities; and our leading mobile, data and payments solutions.

As such, while Travelport reiterated its full-year 2018 guidance ranges provided in August, it now anticipates revenue, adjusted EBITDA, and free cash flow to be at the lower end of those expectations. As a reminder, that outlook calls for revenue ranging from $2.535 billion to $2.585 billion, adjusted EBITDA of $585 million to $605 million, free cash flow of $210 million to $230 million, and adjusted net income per share of $1.34 to $1.46.

Of course, that still leaves room for the possibility that Travelport could be under-promising with the aim of over-delivering. And optimism surrounding its efforts to offset those expected customer headwinds is likely the reason shares have rebounded from their initial post-earnings slump. With that in mind, I believe Travelport's long-term story remains firmly intact.