Mergers and acquisitions, marketing investments, and proactive pricing were three of the most intriguing topics management discussed during the beverage giant's recent earnings call.

The Coca-Cola Company (KO -0.95%) reported vigorous organic revenue growth of 6% in the third quarter of 2018 against the prior year, propelled in part by surprising expansion in flagship carbonated soft drinks like trademark Coca-Cola and Diet Coke. Better earnings results and numerous recent business transactions may portend a higher level of growth. Below, let's isolate three comments made by CEO James Quincey during the company's earnings conference call on Oct. 30, which illuminate growth factors as well as challenges ahead.

About all that M&A over the last few months...

M&A, of course, is not a strategy in of itself, it's an enabler of our strategy, and while the focus of M&A continuously evolves, what's consistent is, we remain disciplined about our allocation of capital and about the mission of M&A as an enabler.

Coca-Cola has initiated a swirl of mergers-and-acquisitions transactions over the last several months -- many of them falling in the third quarter. The company's pending $5.1 billion acquisition of Costa Coffee from Whitbread PLC marks its entry into the retail coffee business, with opportunities for expansion in the global ready-to-drink coffee market. 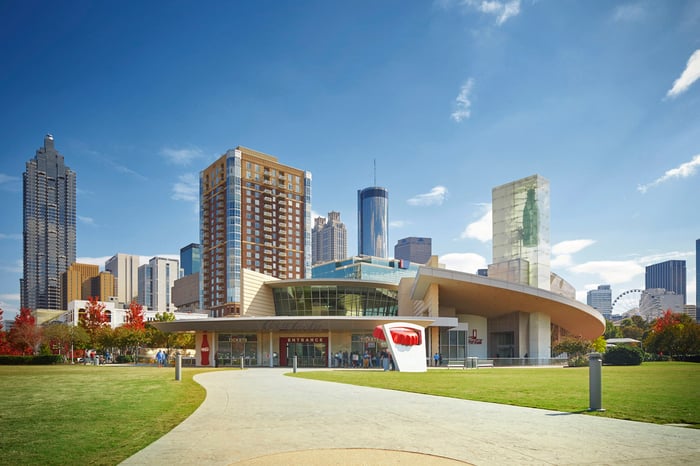 The World of Coca-Cola museum in Atlanta. Image source: The Coca-Cola Company.

Quincey reminded investors during the call that the company utilizes acquisitions to fill in gaps in its portfolio or accelerate into promising markets. He cautioned shareholders against extrapolating from the activity of a single quarter and expecting such an accelerated pace of deals to continue.

But so many transactions need oversight in order for Coca-Cola to achieve its desired return on investments. The company has formed a Global Ventures Group to facilitate deal making and to ensure that new purchases will be smoothly integrated into Coca-Cola's distribution network. The Global Ventures Group will also be responsible for transferring successful products and strategies gleaned from acquisitions throughout the Coca-Cola system at a faster pace. This mimics Coca-Cola's recent "lift and shift" model of transferring successful internal brands across geographical territories.

[W]e are growing the soft drink category in revenue and volume, the Coke trademark is growing, Coke Zero Sugar is growing. So I think, we're seeing the sales and volume and transaction uplifts, engagements by the consumers with the brand. So we think we're at a good place in terms of what our marketing is delivering for us.

The most surprising aspect of Coca-Cola's quarter was a resurgence in its sparkling drinks category. Carbonated soft drink unit case volume rose 2% year over year, led by trademark Coca-Cola and also low-calorie and no-calorie variants of Sprite and Fanta. The company noted that Coke Zero Sugar posted its best growth in 10 quarters.

In addition, Quincey mentioned that Diet Coke is exhibiting volume growth again in the U.S. (as a result of its flavor extension and packaging redesign).

Deriving a decent yield on marketing investments in soft drinks can be thought of as a bonus for Coca-Cola. One of the company's primary tasks is to keep carbonated revenue at least flat over comparable periods, despite a consumption decline in sweetened sodas. It's managing to achieve this through a combination of innovation (as in the reformulated Diet Coke brand), smaller packaging, and the marketing Quincey lauds above. Any core soda growth achieved as the company continues its years-long objective of diversifying its portfolio represents additional margin opportunity.

Yes, so clearly we've taken some price increases this year in the U.S. marketplace, whether that'd be in the juice category by changes in the packaging, in soft drinks, in the number of channels...we're doing a lot of things to engage the consumer with the various categories in our portfolio from the marketing [to] the packaging, working with our customers to create value for them.

In the U.S., Coca-Cola has responded to commodity input price increases and other inflationary pressures by incrementally pushing up prices. This has been initiated with a bit of moxie and without regard to the larger market: As an analyst on the call pointed out, rival PepsiCo hasn't yet followed suit.

The organization's willingness to increase pricing in a moderately expanding economy is an example of its intent to wring value out of all facets of its business, as differentiated from a strategy in the near past that often relied primarily on volume growth to drive net earnings.

An example of this philosophy can be seen in Coca-Cola's recent approach to bottled water. As the market for generic bottled water has decelerated, crimping volume growth, management has emphasized specialty waters and higher-margin variants. Quincey walked through examples of recent bottled water priorities, from the company's acquisition of niche mineral water brand Topo Chico last year to a shift toward higher-end products in China and innovation in Ciel, one of its chief Latin American bottled water brands. The CEO asserted that the company is "moving out of the phase of deprioritizing [low-value water orders] and starting to see some of the benefits of our focus on the premium orders."

Decisions like this mirror the company's larger journey from a volume-based manufacturing business to a brand marketer with higher gross and operating margins. As outgoing CFO Kathy Waller observed on the call, Coca-Cola sold its Canadian bottling operation at the end of the third quarter, marking the last of its North American bottling operations to be refranchised (i.e., sold) under its transition to a capital-light business model. The global beverage titan isn't eschewing growth -- quite the opposite. But price hikes in its biggest market and a de-emphasis on lower-margin products indicate that Coca-Cola is now extremely attuned to the quality of the growth it's seeking.