With a single $5 million payment from a collaboration partner, the earnings portion of AnaptysBio Inc.'s (ANAB -1.91%) third-quarter report didn't contain a lot of details. On the development side, though, the company moved both of its clinical-stage candidates closer to the goal line while collecting plenty of capital to get the job done.

What happened with AnaptysBio Inc. this quarter? 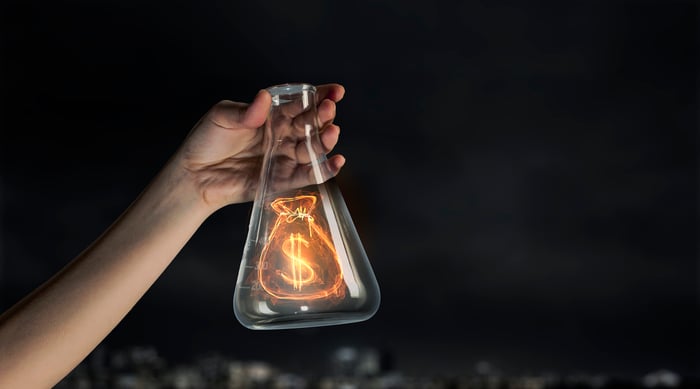 CEO Hamza Suria reminded us that a long, cold winter without much to report will be followed by several potential catalysts.

We continued to advance the clinical development of our wholly owned etokimab and ANB019 programs for severe inflammatory disease indications during the third quarter of 2018. Top-line data from our etokimab phase 2a trial in severe adult eosinophilic asthma patients demonstrated rapid and sustained improvement in forced exhaled volume in 1 second versus placebo, with corresponding reduction in blood eosinophil levels. We look forward to further advancement of our wholly owned pipeline with four additional readouts from ongoing clinical trials of etokimab and ANB019 during 2019.

Around 1% of people in the world's developed nations have asthma too severe to be treated with standard steroids alone. Although eczema is a large enough indication to drive blockbuster sales of etokimab on its own, successful asthma and nasal polyp studies would give the company a safety net that will help investors rest a little easier.

AnaptysBio finished the third quarter with a $512.4 million cash balance after losing $44.7 million during the first nine months of the year. Beginning a handful of midstage studies will cause the company to burn through a lot more cash in the quarters ahead, but it expects it has enough cash and investments on its balance sheet to see it through the end of 2020 at the very least.