Please ensure Javascript is enabled for purposes of website accessibility
Log In Help Join The Motley Fool
Free Article Join Over 1 Million Premium Members And Get More In-Depth Stock Guidance and Research
By Rich Smith – Nov 9, 2018 at 11:41AM

Did weak sales and guidance just create a buying opportunity?

Last night, the website that's become synonymous with the idea of reviewing businesses online reported its fiscal third-quarter financial results. Earnings came out great, with Yelp reporting an adjusted profit (i.e., pro forma earnings) of $0.43 per share, versus the $0.35 that Wall Street had been expecting. Problem was, Yelp also reported its sales number for Q3, and at $241.1 million, it was not only about $4 million short of analyst estimates -- but also up just 8% year over year. 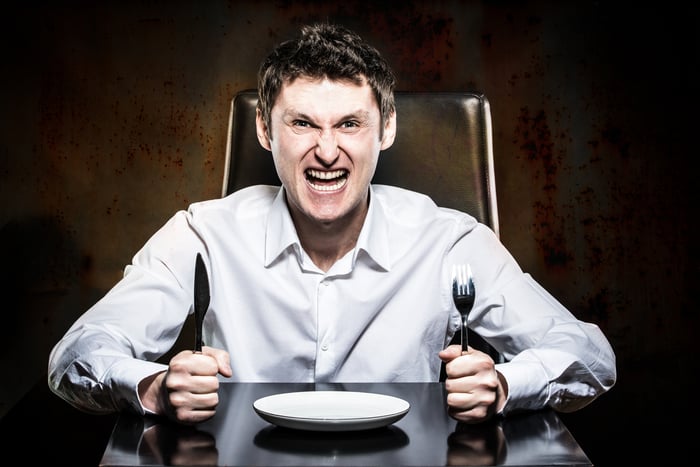 Let's start with the raw numbers. Yelp reported profits of $0.17 per diluted share in Q3 (this is the actual GAAP figure, as opposed to the often-inflated adjusted earnings number that Wall Street earnings estimates focus on, and that companies often choose to highlight). In Yelp's case, however, the GAAP number itself was pretty good -- nearly twice the $0.09 per share that Yelp earned in 2017's third quarter.

Rather, revenue was the problem at Yelp. Total revenue growth was a mere 8% -- not a good starting point for a company that Wall Street analysts (according to S&P Global Market Intelligence) are expecting to grow earnings at 23% annually over the next five years. In its Q3 2018 letter to shareholders, Yelp explained that the reason revenue growth slackened in Q3 was because of a strategic move the company is making to "transition to selling local advertising without an initial term commitment" in order "to bring new advertisers to Yelp and increased new account acquisition."

In other words, in order to lower barriers to entry and get more business customers to sign on as Yelp advertisers, the company has stopped requiring them to contract long-term, and switched to a "dynamic" model in which customers can sign up and sign off more freely.

On the one hand, this move achieved its intended purpose: "In the first nine months of 2018, we onboarded over 60% more new advertisers than in any comparable timeframe in Yelp's history," says management. On the other hand, though...well, there's the Q3 revenue number, for one thing. But for another thing, Yelp was forced to issue new guidance yesterday warning that full-year 2018 revenue is now likely to come in at only about $940 million.

Wall Street was looking for $963 million.

How did Wall Street react to that news? You can read for yourself. Here are a few summaries TheFly.com has already gathered from today's analyst reports:

So, yeah, they're kind of upset. From price targets that ranged as high as $62 (RBC Capital), these analysts are now variously valuing Yelp stock at between $32 and $38 a share. Worse, investors have sold off the stock by nearly 30% this morning, and Yelp is currently fetching closer to just $31 a share.

Should you panic, too?

Are they right? Have things gone so bad, so fast at Yelp that this stock is now worth 30% less than it was just 24 hours ago?

The good news here is that I don't necessarily believe they are right -- neither the analysts nor the investors who are selling Yelp stock today. Consider that over the last 12 months, Yelp generated nearly $130 million in positive free cash flow (FCF) from its business (and this was over and above the cash generated from its sale of Eat24 to GrubHub back in last year's Q4). Weighed against these cash profits, Yelp has a $2.6 billion market capitalization after today's sell-off, and more than $800 million cash in the bank -- giving the company an enterprise value (EV) of just $1.8 billion.

At an EV/FCF ratio of just 14 today, Yelp actually looks pretty cheap to me if the company succeeds in growing earnings at the 23% annualized rate that Wall Street projects for it. Although it's true that Q3's sales growth rate of only 8% gives cause for concern, as R.W. Baird notes, Yelp's new business model appears to be designed to trade slower revenue growth for higher profit margin on the revenue (and witness the near-doubling in GAAP profit for proof that this is working out).

Accordingly, even with sales growth slowing, I think it's feasible for Yelp to keep growing earnings as planned -- and I think it's possible that today's sell-off is giving investors a good chance to buy into Yelp stock on the cheap.