The company has long said the premium cable service would drive growth, and that day has arrived.

It's been nearly two years since Lions Gate Entertainment (LGF-A -5.63%) (LGF-B -3.26%) acquired Starz, and all the while management has been predicting that a streaming offering and international expansion of the cable channel would drive growth for the company.

Earlier this year, Lions Gate said the growth it expected in fiscal 2019 wouldn't make an appearance until 2020, and the stock took it on the chin, falling more than 40% in the months that followed.

Investors have been waiting for signs that management's strategy is taking hold, and when Lions Gate reported its latest results, shareholders got just what they were looking for.

For the just-completed fiscal 2019 second quarter (which ended Sept. 30), Lions Gate reported revenue of $901 million, a decline of 4% year over year, but exceeding analysts' consensus estimates of $891.8 million. The loss per share of $0.67 was much worse than the $0.07 the company generated in the prior-year quarter, but that requires a little explanation. 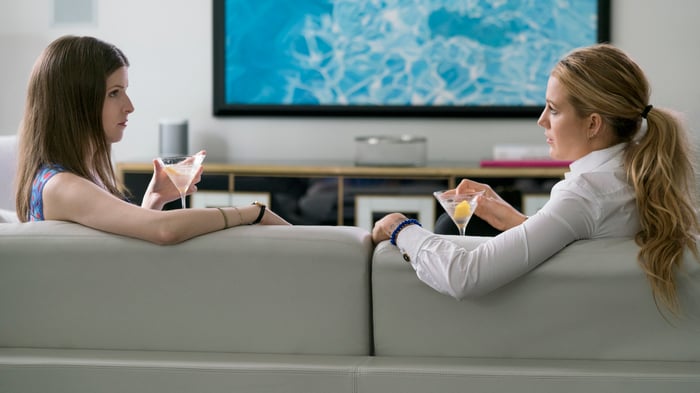 What happened to the bottom line?

What caused the huge discrepancy? Nonrecurring one-time charges. The company recently settled a lawsuit brought by Starz shareholders over the $4.4 billion acquisition. The unadjusted net loss included $114.1 million related to that settlement. Excluding that one-time impact, Lions Gate's adjusted net income of $48.2 million resulted in adjusted earnings per share of $0.22, more than double the $0.10 expected by analysts.

The media networks segment produced revenue of $377.3 million, up 5% year over year, driven by strong over-the-top (OTT) subscriber revenue. Profitability within the segment increased to $122.7 million, up 19% versus the prior-year quarter. Domestic subscribers for Starz increased by 1.3 million during the quarter, reaching 25.1 million. This marks the second consecutive quarter of growth in both traditional cable and OTT subscribers.

Revenue from the motion picture segment came in at $379 million, a decline of 2% year over year, due to tough comps from the prior-year theatrical movie slate. Nevertheless, segment profits increased to $12.9 million, up 45% year over year, as Lions Gate leveraged previously released theatrical titles for distribution.

The most exciting news for investors was the record growth that came from Starz. Lions Gate believes it can expand its global partner's strategy, recently announcing that Starz will be available to Virgin Media subscribers in the U.K. beginning Nov. 29. On the conference call with analysts to discuss the results, Chris Selak, Lions Gate's head of worldwide scripted television, said the company also sees a big opportunity to expand Starz Play (the streaming version of its service) into additional territories and markets. Finally, the company may work with a big telco or big media company to extend its reach.

We're pleased to report a strong quarter with robust free cash flow and outstanding growth at Starz. Our great results at Starz reflect our slate of hit premium programming, strong over-the-top subscriber growth and retention, and healthy gains in our [multichannel video programming distributor] business. Coupled with the global expansion strategy we have begun to execute, we see a very clear path to outsized value creation for our platform. 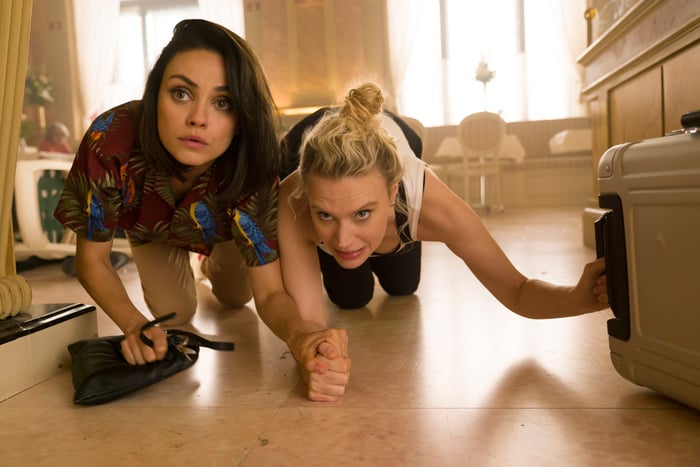 Mila Kunis as Audrey and Kate McKinnon as Morgan in The Spy Who Dumped Me. Image source: Lions Gate.

Lions Gate doesn't provide quarterly guidance, instead preferring to focus on the longer term. The company continues to stand by its previous forecast to deliver a three-year adjusted OIBDA (operating income before depreciation and amortization) compound annual growth rate in the mid- to high-single-digits.

In the absence of any specifics from management, we'll need to turn to Wall Street for insight into its expectations for the company -- though we don't want to be beholden to its short-term mind-set. For the upcoming fiscal third quarter, analysts' consensus estimates are calling for revenue of $1.02 billion, a decline of 11% year over year, leading to adjusted earnings per share of $0.17.

Lions Gate has long said that the seeds it planted with its Starz expansion would grow, and we are seeing the first indications of that now. The company still expects the biggest impact in fiscal 2020, so investors have much more to look forward to.