Please ensure Javascript is enabled for purposes of website accessibility
Log In Help Join The Motley Fool
Free Article Join Over 1 Million Premium Members And Get More In-Depth Stock Guidance and Research
By Danny Vena – May 30, 2017 at 5:31PM

Lions Gate reported its first full quarter since completing the acquisition of Starz.

Lions Gate Entertainment Corp. (LGF-A -0.52%) (LGF-B 0.85%) reported its first full quarter since closing its acquisition of Starz, the premium cable television operator. The resulting diversity in operations should deliver more stability for the combined company. The addition of the cable operator provides consistent subscriber-based revenue that will help offset the volatility and seasonality associated with Lions Gate's box office business, and provide additional scale for the movie and television studio.

On the conference call, CEO Jon Feltheimer noted the company's transformation from a "film and television studio into a diversified global content machine." He also noted that they were well ahead of schedule in integrating the two companies and producing additional unforeseen synergies. This resulted in better-than-expected financial results for the quarter. Investors seemed pleased with the inaugural performance of the combined companies, sending Lions Gate shares up nearly 9% following the results. 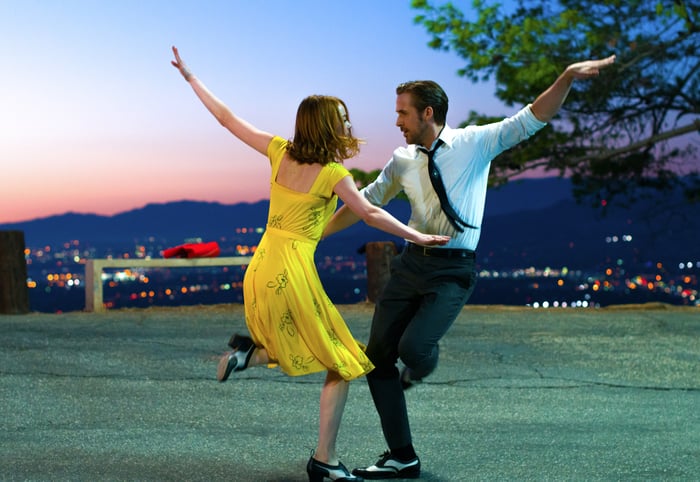 Shooting for the Starz

Lions Gate reported revenue of $1.26 billion, up 59% over the prior-year quarter, including results from the recently completed Starz acquisition. Management noted that this was the first full quarter since the closing of the merger and that the financial results wouldn't be directly comparable to prior reporting periods. Organic growth overall increased about 2%.

Net income for the period grew from $11.5 million to $61.5 million, a fivefold increase year over year. On a non-GAAP basis, operating income before depreciation and amortization (OIBDA) increased 27% over the prior-year quarter to $163 million and adjusted earnings per share increased to $0.59.

As a result of the recently completed merger, the company has realigned its business operations, as well as adding a new reporting segment to accommodate the additional business related to Starz. The third segment, media networks, joins motion pictures and television production as the three areas in which the company will break out its operating results.

Starz in their eyes

During the earnings conference call, Feltheimer noted the synergies resulting from the combination have already resulted in additional film and television deals valued at over $100 million, which had not been forecast prior to the close of the acquisition.

The results of the operating segments showed healthy growth as well. Revenue from media networks increased to $370.8 million, up 10.7% over the prior-year quarter, while motion picture segment revenue grew to $654 million, up 7.3% year over year. This growth was driven by La La Land, which won six Academy Awards, as well as John Wick: Chapter Two and The Shack, and resulted in one of its strongest box office quarters ever. The television production segment lagged on last year's record quarter, falling to $242.6 million, down 3% from the prior-year quarter.

Lions Gate also reported a backlog of $1.4 billion. This represents the contracts already in place that will produce future revenue that has not yet been recorded.

Starz meanwhile has launched its own stand-alone over-the-top service, which provides the company with additional revenue and recoups more from each subscriber than what it currently enjoys from its relationships with cable providers. As the company continues to increase its library of original series, this may provide an incentive for future subscribers, particularly as cord-cutting takes further hold.

This is a good start to the long-term opportunity provided by the marriage of the two businesses. One of the subjects that came up repeatedly on the earnings conference calls was the opportunities that have opened up as the result of the merger. Having Starz gives Lions Gate an additional outlet for its programming and movie productions and the combined budgets provide flexibility and additional resources for allocating costs across the multiple venues, as well as the ability to cross-promote their television and film properties. So far, anyway, it seems like the Starz acquisition is paying off.

Can Lions Gate Climb Out of Its Slump When It Reports Earnings?
351%