Will “WeChat VR” fare any better than Facebook’s Oculus efforts?

Tencent (TCEHY -3.61%) CEO Pony Ma recently stated that his company would "seriously consider" adding VR features to its flagship mobile app WeChat. Ma made the statement during his keynote speech at the 2018 Wuzhen International Internet Conference, and predicted that companies would "exhibit more portable VR devices" at next year's conference.

Tencent's interest in the VR market isn't new. It invested in several VR studios and planned to release a VR headset last year, but the project was reportedly shelved due to underwhelming headset sales and the collapse of several VR game makers. The Chinese government's freeze on new video game approvals also tossed a wrench into the development of new VR games. 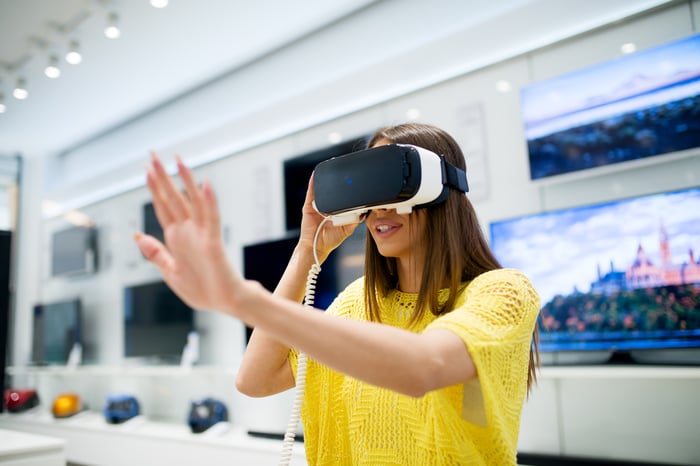 That "video game winter" forced Tencent to restructure its businesses in October to emphasize the growth of its non-gaming businesses -- including WeChat, its digital content platforms, and its cloud and AI services. Ma's idea of expanding WeChat, the top mobile messaging app in China with 1.06 billion monthly active users (MAUs), into a VR platform complements that strategic shift.

Yet Tencent isn't the first big tech company to consider expanding a social network with VR features. That company was Facebook (META -4.37%), which gradually integrated Oculus VR's platform with its own social network to create social experiences in virtual reality.

Facebook initially added simple social experiences to the Oculus platform with multiplayer games and chat rooms. Last year, it launched Facebook Spaces, a VR app that lets users communicate with each other through avatars and participate in various activities, like playing games and taking selfies.

That sounded like a huge leap forward for the social network, and explained why Facebook bought Oculus VR for $2 billion in 2014. Unfortunately, the high-end VR headset remains a niche market. Earlier this year, SuperData estimated that Facebook would only ship 120,000 Oculus Rift units this year, while HTC (HTCKF) would lead the market with 170,000 Vive shipments. 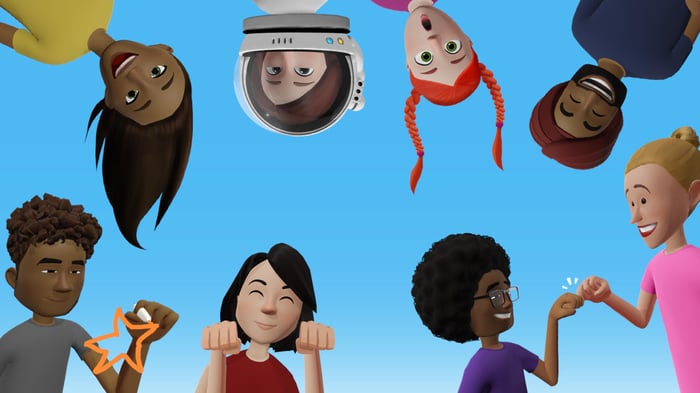 That's why Facebook pivoted away from the high-end Oculus headsets, which need to be tethered to high-end PCs, toward cheaper stand-alone devices like the $200 Oculus Go. SuperData predicts that the Go will fare better with 1.8 million shipments, but that represents just 0.08% of Facebook's 2.28 billion monthly active users (MAUs) worldwide.

That's a far cry from Facebook CEO Mark Zuckerberg's long-term goal of reaching over a billion VR users, and indicates that the VR utopia (or dystopia) featured in Ready Player One -- a book which Zuckerberg gives all his employees -- remains a sci-fi fantasy for now. So why is Tencent interested in following Facebook's footsteps?

Tencent realizes that WeChat's growth is slowing down. The platform's MAUs grew 10% year-over-year last quarter, but that represented less than 2% growth from the previous quarter. Tencent also faces intense competition from ByteDance's portfolio of high-growth apps, which include the news aggregator Jinri Toutiao, the short video platform Douyin/TikTok, and the streaming video platform Xigua.

To counter that slowdown, Tencent is expanding WeChat's ecosystem with "mini programs" which launch from within its app. Tencent claimed that its mini programs hit 200 daily active users (DAUs) last quarter. By tethering more services -- like food deliveries, e-commerce platforms, and ride hailing services -- to that platform, Tencent hopes to boost its revenues per user and prevent them from leaving its ecosystem.

Tencent is also expanding WeChat's ecosystem into adjacent markets. It recently introduced with a new smart vehicle system that uses WeChat as a control interface, and plans to launch new "virtual assistant" features for business users. Tencent also recently collaborated with Tonot to launch smartglasses for Weishi, its short video rival to ByteDance's TikTok. In that context, it would be logical for Tencent to collaborate with headset makers to launch a VR platform comparable to Facebook Spaces for WeChat users.

During the conference, Ma suggested that faster 5G connections would support the adoption of mobile VR devices. However, it's a stretch to believe that mobile VR headsets -- which are generally clunky and obstruct the user's vision -- will ever be as widely used as smartphones. It's also doubtful that Tencent's VR features for WeChat can fare much better than Facebook's efforts, unless it can approach the fledgling "social VR" market from a fresh angle.