Please ensure Javascript is enabled for purposes of website accessibility
Log In Help Join The Motley Fool
Free Article Join Over 1 Million Premium Members And Get More In-Depth Stock Guidance and Research
By Brian Stoffel – Nov 12, 2018 at 8:17AM

It all comes down to one thing: patents. Find out who that benefits.

To say it's been a great decade to be a medical device company would be a vast understatement. As technology makes the procedures we need to live longer lives safer and more efficient, the companies behind them -- and their investors -- have enjoyed handsome profits.

That's certainly been the case for the two companies we're evaluating today: robotic surgery specialist Intuitive Surgical (ISRG -0.29%) and dental-focused Align Technology (ALGN 2.06%). Over the past five years alone, each has quadrupled in price. 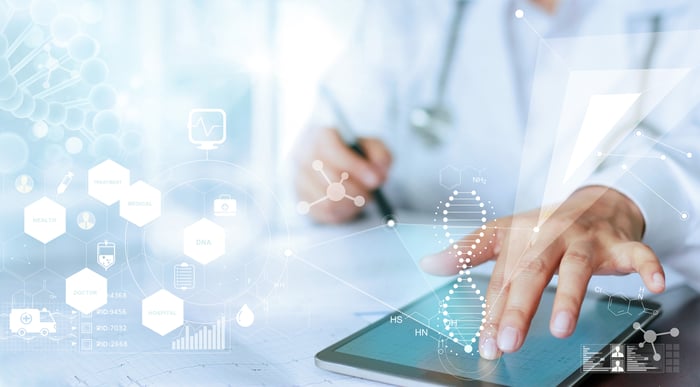 But which is the better stock to buy today? Here are three different facets we can evaluate them on to come to an informed decision.

We want to know that if and when tough times hit, the companies we're invested in can survive. That's why financial fortitude is so important. Keeping in mind that Intuitive Surgical is valued at over three times the size of Align, here's how the two stack up.

The big-picture takeaway is that both of these companies are very solid. In fact, they not only have fortitude, but I would call them "antifragile" -- they could actually benefit from market downturns. With sizable war chests, solid cash flows, and absolutely no long-term debt, they could acquire rivals or buy back shares on the cheap when the opportunity presents itself.

In fact, just this week Align announced it would be doing just that.

Overall, I don't think there's that much space between these two -- they're both in very solid shape. But if forced to choose, i would side with Intuitive Surgical, as it has been buying back shares and growing its cash hoard at a record pace over the past three years.

The next metric to evaluate is price. This can be a difficult concept to pin down, as no one figure gives a holistic picture of how "expensive" a stock is. That said, here are four numbers I like to look at when evaluating price.

As with financial fortitude, these two are very closely matched. Intuitive Surgical trades for a demonstrably lower price-to-free-cash-flow, while Align's PEG Ratio (which takes growth rates into account) sits at a much lower multiple.

Overall, I'd give the edge here to Align, especially since the stock was almost cut in half last month.

But by far the most important thing for any long-term investor to evaluate is the sustainable competitive advantage -- or moat -- of the underlying company they are buying.

Intuitive Surgical's moat comes primarily from the fact that there are over 4,700 daVinci robotic surgical systems installed throughout the world. With each system comes a hospital that was willing to put down over $1 million for the machine, and a group of doctors committed to learning the machine and tinkering with new operations where it can be used.

That creates two important dynamics. First, it leads to high switching costs: Once a hospital or doctor commits to daVinci, they want to continue using it to utilize the time and money they've put in. Perhaps more importantly, as more doctors tinker with more ways to use the machines to improve patient outcomes, more potential procdures will crop up for the company. That creates vast multiple futures over the next 10 years.

Align also has the advantage of winning over dentists in droves. It has discovered that when a dentist uses the clear Invisalign molds with patients -- instead of traditional braces -- and does so at scale, it can be profitable for the dentist and more convenient for the patient.

So there you have it: While Align's share-price cut gives it a more enticing valuation, Intuitive's long-term moat protection makes it a far better choice at today's prices. That's why the company has been a long-term CAPS pick in my profile, as well as a 5% allocation in my real-life portfolio.