Three broad changes are coming over the next decade.

Ten years ago, robotic surgery was still in its infancy. Intuitive Surgical (ISRG 0.10%) -- maker of the daVinci robotic surgical system -- was a $7 billion company whose machines had performed 136,000 procedures. At the time, the stock traded for (a split-adjusted) $58 per share.

Fast forward to today: Intuitive is a $60 billion behemoth that will likely end the year having helped perform over 1 million procedures worldwide. Investors have been rewarded in kind: the stock has increased ninefold to $520 per share.

But if you think you've missed the boat, here's a reminder that CEO Dr. Gary Guthart likes to make in every conference call: With robotic surgery, we are still in the early innings of adoption. Here are three broad themes I see playing out over the next decade. 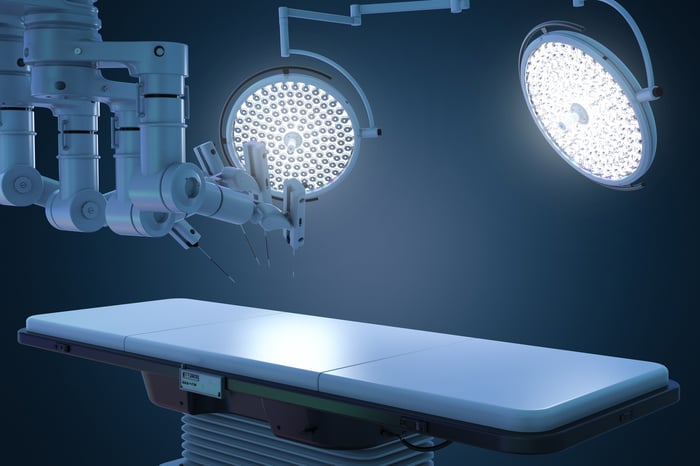 More procedures -- but it won't be a straight line

Here's the single most important -- and often overlooked -- aspect of Intuitive Surgical: every year, it has thousands of doctors using the system. They test, they tinker, they think about different ways and different procedures in which the system can be used. Most of these ideas won't come to fruition, but a few will. And when they do, they'll make a huge difference for the company.

Five years ago, the company found itself in a tough position. Prostate procedures had stagnated, health officials were calling for fewer robotic hysterectomies, and the onset of the Affordable Care Act had hospitals tightening their purse strings.

Procedure growth fell off a cliff, and investors panicked. But, I cautioned at the time, we can't forget about the optionality -- or multiple future lines of business -- that Intuitive has. Those doctors are going to continue tinkering, I argued, and we have no idea where that might lead.

As you can see below, procedures picked up impressively after the downturn, thanks in large part to a booming number of hernia and colorectal operations: 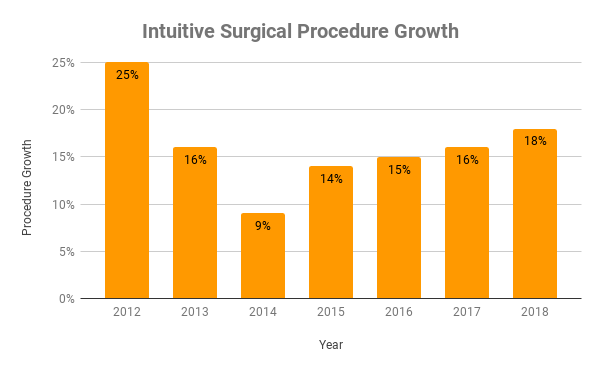 Data source: Securities and Exchange Commission filings. Chart by author. 2018 procedure growth is through the first three quarters of the year.

Of course, as the number of total procedures continues to grow, it will become harder and harder to keep these growth rates up. And that's OK -- this is what happens when companies get large.

Similarly, investors should expect that at least once over the next 10 years, Intuitive will experience circumstances similar to 2014, where there's a lag from one set of procedures moderating while the next big procedure has yet to scale. This is the nature of the company's dynamics, and such instances will probably present excellent buying opportunities.

A shift toward subscriptions

It might sound ridiculous to hear, but I wouldn't be surprised to see Intuitive also change the way it distributes systems throughout the world. For most of the company's history, that has involved hospitals putting down between $1 million and $2 million for a new daVinci system.

But over the most recent quarter, we saw a stark increase in alternative financing. As highlighted by management in the conference call:

We are seeing increased customer interest in alternative capital acquisition approaches, including leasing and usage-based models. This quarter, the proportion of new systems placed under lease increased over prior quarters.

We believe it is in both our customers' interest and Intuitive's to offer alternative financing models for qualified hospitals. We have expanded these programs accordingly.

I'm not 100% sure what a usage-based model might look like at scale. But I know this: running a business based on subscriptions -- instead of one-off purchases -- has enormous advantages for everyone involved: Hospitals have lower upfront costs, Intuitive has customers that are even more locked in, and there's a reliable stream of recurring revenue.

Don't be surprised to see newer models testing this approach in the years to come.

Right now, Intuitive Surgical has a great problem on its hands: it has to figure out what to do with its excess cash. Not that long ago, the company couldn't afford to do anything but plow it back into research and development. But over the past five years -- coinciding with the ascension of hernia operations -- it has been flush with cash.

Here's what free cash flow has looked like over the past decade: 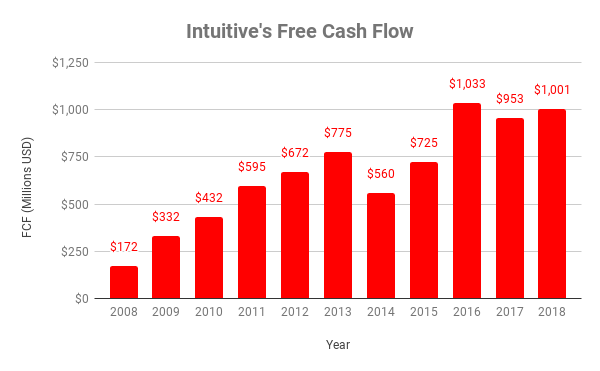 It's worth noting that 2018's figures are for the trailing twelve months -- meaning that if the fourth quarter's free cash flow comes in ahead of last year's, then the year's figure will be even higher. No matter how it turns out, too much cash is a good problem to have.

The company first dealt with the problem by buying back shares. But I wouldn't be surprised to see its approach shift.

Right now, the company has a net cash position of $4.6 billion -- almost twice where it was four years ago after its share repurchase. If management wanted to start spending 50% of this excess cash on dividends, that would come to an annual dividend of $4.35 per share. That only comes to a 0.8% yield.

But it's important to remember that this cash continues to grow despite aggressive reinvestment in the business. If the growth continues, the potential for a dividend will increase as well.

While I'm certainly not advocating buying the stock for a potential dividend, it is something that long-term investors could benefit from over the next ten years.

It goes without saying my crystal ball isn't perfect -- if it was, I'd have bought Amazon back when it went public. That being said, as an Intuitive shareholder myself, these are three things I see on the horizon: continued progress -- albeit with fits and starts -- in procedures; a shift toward subscription or usage-based purchasing plans; and a possible dividend. I have no intention of selling my stake, and look forward to seeing these things play out.