Please ensure Javascript is enabled for purposes of website accessibility
Log In Help Join The Motley Fool
Free Article Join Over 1 Million Premium Members And Get More In-Depth Stock Guidance and Research
By Billy Duberstein - Updated Nov 14, 2018 at 11:13AM

Like autonomous cars...but bigger, and with some different considerations.

While self-driving cars grab most of the headlines, autonomous ships could be the first unmanned vehicles to make a real splash.

One business making a big push toward this future is Rolls-Royce's commercial marine division, which is now part of Norwegian shipping company Kongsberg (NSKFF -4.27%). That division just inked a deal with Intel (INTC 0.96%) to deploy Intel's technology for autonomous shipping fleets, which could be roaming the seas by the time we welcome the 2030s.

This is not the Rolls-Royce motorcar brand that you're familiar with, which is now owned by BMW. Rather, this is the Rolls-Royce division involved in making engines for commercial shipping. That division was sold by the larger Rolls-Royce British parent company, which makes aerospace engines, to Kongsberg in June.

This new technology put Rolls-Royce on the cutting edge and I think it's also a positive sign for Intel's strategic acquisition strategy of the past few years. 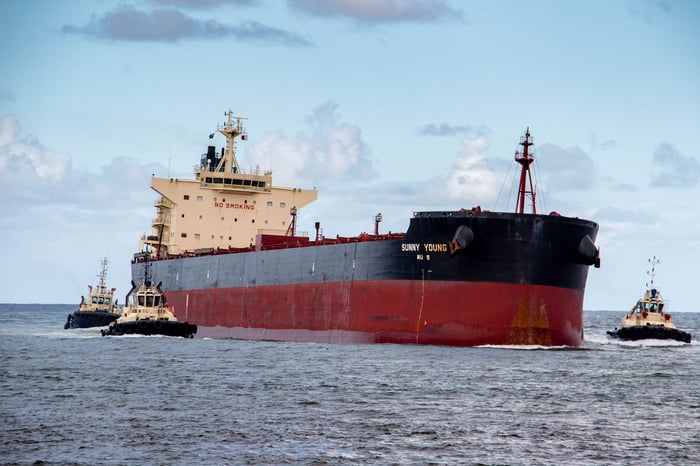 The benefits of autonomous shipping

There are several key benefits for autonomous shipping, all of which are similar to the benefits of self-driving cars, just on a larger scale.

The most obvious benefit is reduced costs. You wouldn't have to pay a crew, but it's actually more than that, because newer ships could be designed from the ground up without the need for lodging quarters, fresh-water storage, extra heating and cooling systems, or other amenities humans need. That would not only cut costs, but also free up space to do what ships are intended to do -- carry as many shipping crates as possible.

Second, autonomous ships should be much safer. According to Allianz Global Corporate & Specialty, human error is responsible for 75% to 96% of all marine accidents. These accidents are the costliest part of liabilities across the industry.

Third, and related to the others, autonomous shipping should cut down on piracy as TechEmergence relates that kidnapping crew members to get ransom money is the key reasons for piracy. If humans aren't on the ship, there are no potential kidnap victims. Piracy is actually down from about 10 years ago, but is still a problem, with TechEmergence reporting that the "economic cost" of Somali piracy was $1.4 billion in 2017.

The deal with Intel

You might think that autonomous shipping would be easier to pull off than autonomous vehicles given there are fewer ships on the seas than cars on the roads. That may be true, but it still has a lot of complications. Like automobiles, autonomous ships will depend on a mix of high-resolution cameras, radar, and lidar systems, among other technologies. Autonomous ships will have to locate very small objects miles away, so the sensors will have to detect objects in very high resolution, in all types of weather scenarios, while these objects bob up and down with waves. These sensors are estimated to generate a terabyte of data per day (which is a lot), which will all have to be processed in real time and stored.

It looks as though Rolls-Royce will be employing a wide range of Intel technologies to provide a comprehensive solution. These include not only Intel's Xeon processors, but also servers containing Intel's 3D NAND storage chips, as well as autonomous software (acquired via the 2017 Mobileye acquisition), and field-programmable gate arrays (FPGAs), a capability acquired in the 2015 Altera acquisition.

A testament to Intel's strategy

Rolls-Royce says that by 2025 it "hopes to have a remotely operated autonomous vessel in international waters. Five years later the company hopes that autonomous ocean-going vessels are a common sight on the ocean."  There are already tests going on, and remote-controlled ships (which require fewer humans aboard, though are not fully autonomous) should be up and running soon. Rolls-Royce's director of ship intelligence, Kevin Daffey, says these commercial remote-controlled ships will be in coastal waters -- where one country has jurisdiction -- within 18 to 24 months.

As for Intel, this deal is a testament to ex-CEO Brian Krzanich's acquisitive strategy over the past five years. By combining core processors and memory with new capabilities in FPGAs and software, Intel can now provide a "one-stop shop" for large, transformative projects like these that require the integration of several technologies. So while Intel has had its share of manufacturing and C-suite hiccups this year, it seems strategically well positioned for future big-data projects like this.

Editor's note: An earlier version of this article incorrectly stated the value of goods shipped in 2017. It has been updated.