Apple may pay a bit extra to give faster wireless speeds to all of its new model smartphones in 2019.

Apple's (AAPL 1.92%) flagship iPhone XS and iPhone XS Max share a lot of similarities with its lower-cost iPhone XR model. They all use the same screaming-fast A12 Bionic applications processors, incorporate identical TrueDepth camera systems for Face ID and features like Animoji, and share the same rear-facing wide-angle cameras.

Teardown reports from iFixit also reveal that all three smartphones use the same Intel (INTC 1.25%) XMM 7560 LTE modem. Despite this fact, though, Apple markets the higher-end devices as capable of gigabit LTE speeds, while the iPhone XR can only deliver "LTE Advanced" speeds. 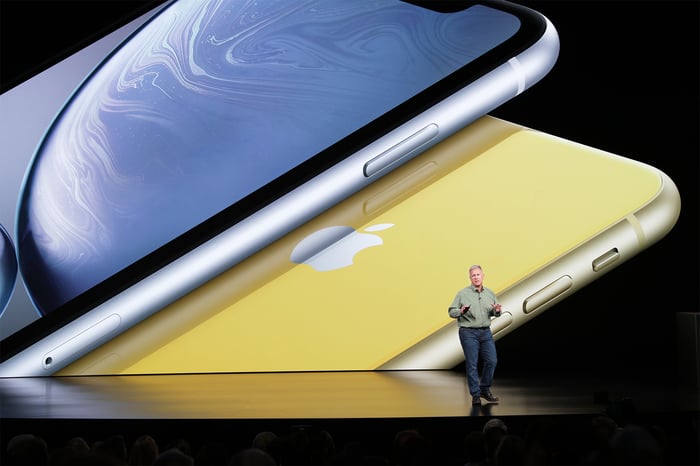 PC Magazine tested the devices and said that "[the] iPhone XS and XS Max speed past the XR in our most recent signal test results, showing that XR downloads may stall while their more expensive siblings zip along in the fast lane."

Here's PC Magazine's explanation for part of the performance disparity:

Both the XS/Max and the XR use the same modem, the new Intel XMM7560. But the XR is missing two of the XS/Max's antenna branches, making it a 2x2 MIMO phone versus the XS/Max's 4x4 MIMO.

The difference doesn't just come down to 2x2 MIMO vs 4x4 MIMO, however:

How about where the cellular networks can't handle 4x4 MIMO? Some cell sites around the country still run on 2x2 MIMO, and you'd think that in those conditions, the phones would perform equally well. You'd be wrong. It turns out that the iPhone XS/Max get stronger performance than the XR, even when the network itself is 2x2 MIMO.

Let's look at what seems to be going on here, and how this could benefit Apple supplier Broadcom (AVGO 2.19%).

Apple tried to save money

Ahead of the launch of Apple's latest devices, analyst Romit Shah of Nomura subsidiary Instinet claimed that for the device that we now know as the iPhone XR, Apple would replace Broadcom's PAD filter chip with a cheaper alternative from Qorvo (QRVO 6.18%). That move, Shah said, "represents approximately $100 [million] in [bill of materials] cost savings for Apple and roughly $400 [million] revenue headwind for Broadcom in 2H18."

Broadcom CEO Hock Tan admitted on the company's Sept. 6 earnings call that because Apple had reused the RF platform from the iPhone 8-series and iPhone X devices in the iPhone XR, this "[creates] an opportunity for a customer to temporarily use lower performance alternatives in selected SKUs."  (Indeed, PC Magazine said "[the] iPhone XR ... looks a lot more like our results from last year's test of the iPhone X, which is also a 2x2 MIMO phone.")

However, Tan did say that "every indication we have is that the cadence of annual platform upgrades will resume in the upcoming 2019 smartphone generation" and that "we believe we're very well-positioned to win back the platform."

Looking even further ahead, Tan claimed that "with 5G on the horizon, we expect this cadence of annual upgrades to sustain." (Fast Company recently reported that Apple is planning to launch 5G iPhones in 2020.)

"And accordingly, we expect to see our wireless revenue returning to double-digit growth in fiscal 2020, following a temporary dip in fiscal 2019," Tan said.

Why that could make sense for Apple

For Apple to hit the price points that it wanted to with the iPhone XR and still achieve what it viewed as an acceptable gross margin percentage, it needed to make some choices about how best to cut the phone's manufacturing costs relative to the iPhone XS or iPhone XS Max (with retail prices that start at $999 and $1099, respectively). Clearly, management concluded that saving money on radio frequency chips was a good move for this generation of devices.

Apple is rumored to be keeping form factors unchanged for the 2019 models -- which makes sense, considering how long it kept the same basic iPhone 6 and iPhone 6 Plus form factors around. The iPhone XR's casing likely will become cheaper to produce over the next year, as will the display. (Apple is likely to reuse both in the next iPhone XR). On top of that, Apple likely will discount this year's iPhone XR, and have it replace the iPhone 8 and iPhone 8 Plus as its mid-range option next year.

So, between the need for cost-structure optimizations and the desire to differentiate next year's iPhone XR from the current one, it makes sense for Apple to give the next XR the same cellular capabilities as its higher-end counterparts.

One potential downside, though, is that it would eliminate a point of differentiation between the iPhone XR and the successors to the iPhone XS and iPhone XS Max. With that being said, those high-end models should still have OLED screens, stainless steel casings and Apple’s most advanced camera technology, while Apple is likely to continue to use LCDs, aluminum casings, and feature-reduced camera systems in the lower-priced models if history is a guide. Apple may even add still more differentiating features to its flagship smartphones to further encourage buyers to spring for the top-of-the-line options.