Please ensure Javascript is enabled for purposes of website accessibility
Log In Help Join The Motley Fool
Free Article Join Over 1 Million Premium Members And Get More In-Depth Stock Guidance and Research
By Ashraf Eassa - Nov 6, 2018 at 9:00AM

It's Intel inside -- again.

Now, according to a new report from Fast Company, Apple will source 5G modems exclusively from Intel for its 2020 iPhone lineup. Let's take a closer look at the details in the report.

A while back, Intel announced that its first 5G modem is a part known as the XMM 8060. Fast Company says this part isn't what Apple will be shipping as part of its first 5G-capable iPhones. Instead, the report says "Apple plans to use Intel's 8161 5G modem chip for its 2020 phones." The XMM 8060, however, "will be used for prototyping and testing the 5G iPhone."

The baseband processor that's part of the XMM 8161 will reportedly be manufactured using Intel's upcoming 10 nanometer technology. On Intel's Oct. 25 earnings conference call, CFO and interim CEO Bob Swan said the yield rates of its 10nm technology "are improving" and that the company is "on track for 10nm-based systems on shelves during the holiday 2019 selling season."

At its technology and manufacturing day last year, Intel indicated that the performance per watt of its 10nm technologies was substantially greater than that of its 14nm technologies. 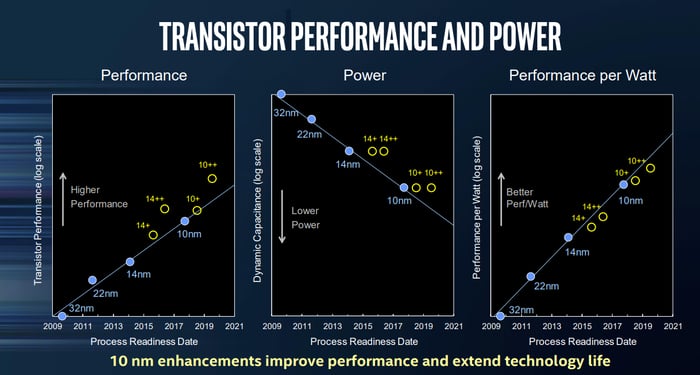 Fast Company claims that Apple "has been unhappy with Intel lately," probably "related to the challenge of solving heat dissipation issues caused by the 8060 modem chip."

Fast Company's source did reportedly say, though, that going with MediaTek would be a "distant 'Plan B'" and that "Apple and Intel have ample time to correct problems in the Intel modem platform."

Back on the July 26 earnings call, Swan said the following with respect to the gross margin of its modem business:

In terms of modem in particular, yes, we do expect to improve gross margins for our modem business, both with our 7560 product that will begin to ship in the second half, but also as we migrate to a 5G world, we expect margins in the modem business to continue to improve. So yes, we expect modem profitability to improve.

So if Intel wins all of Apple's 5G modem business, it seems likely that those products will be more profitable than the modems Intel is currently supplying to Apple.

Intel still also has some room to grow its share of Apple's iPhone modem business. If we assume that Intel wins the entirety of the modem orders in next year's iPhones and then further assume that it will win all of the 2020 iPhone modem business, then when Apple introduces its 5G iPhones in the fall of 2020, it'll be using Intel modems exclusively in its iPhone lineup at the time. That share growth should help boost Intel's modem revenue from current levels.

On top of that, Apple would probably be using the XMM 7560 in its lowest-end product -- likely to be a discounted version of this year's iPhone XR -- along with the XMM 7660 in its mid-range product, and then the 5G-capable XMM 8161 in the flagship models.

Since Swan indicated that the XMM 7560 carries a fatter gross margin than the other modems it's selling to Apple, the overall gross margin of Intel's modem business could grow quite nicely over the next several years.