But the technologically advanced warehouse club will be the only one.

Walmart (WMT 0.08%) plans to open a new Sam's Club store to be a test center for retail technology that will be very much like the Amazon Go convenience store from Amazon.com (AMZN 3.58%). Customers will be able to skip the checkout line by scanning their merchandise using scan-and-go technology. All you'll need to shop in one is a Sam's Club membership.

This research center isn't quite as advanced as Amazon Go, since the e-commerce giant's store identifies the items you've selected and charges you, while the Walmart version requires you to scan the items to input them. But Walmart's plan is also more affordably scalable, though the company apparently has no plans to open more than just this one, which will be in Dallas. 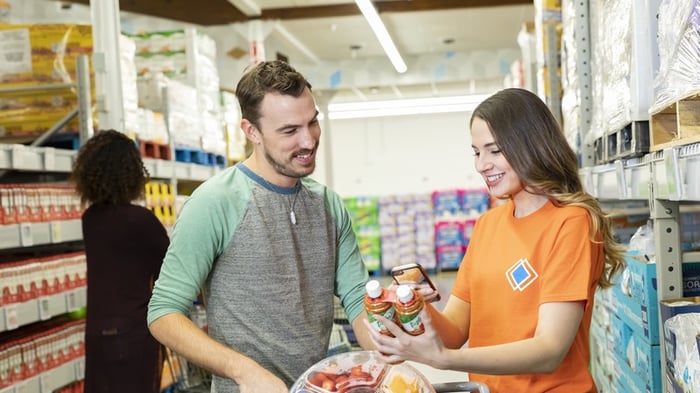 Not quite the warehouse club experience

This new technologically advanced retail store will be called Sam's Club Now and was first announced back in June, with Walmart calling it "the epicenter of innovation for Sam's Club." Using computer vision, augmented reality, machine learning, artificial intelligence, and robotics, Walmart is looking to test out concepts in this one store before rolling them out nationally after they've proved successful.

Sam's Club members who shop the store will find that at 32,000 square feet, it is much smaller than what they're used to -- about a quarter of the size of a typical club warehouse. And similar to the Amazon Go store, the Sam's Club version will focus on fresh foods, grab-and-go meals, and services like same-day pickup and delivery. Among the concepts that will be tested are digital shelf pricing, using some 700 cameras to help manage inventory and optimize store layout, and digital maps to help you find the item you're looking for.

Customers will select their items, scan them into the club's Scan & Go app, and pay for them with their mobile wallet at the door as member hosts, who will serve as the store's "concierges," scan a code on a customer's phone to trigger the transaction.

Amazon is quickly rolling out its own version of the cashier-less store, with a half-dozen Amazon Go locations already open and some 3,000 total planned by 2021. These grab-and-go concepts have the most potential to upend the convenience store industry as their smaller footprint and limited inventory of fresh and prepared foods target the shopper looking for a quick bite.

7-Eleven, the world's largest convenience-store chain with more than 60,000 stores globally, will be introducing its own scan-and-pay app at 14 Dallas-area stores, a clear indication that it sees the threat Amazon and Walmart pose.

Yet other than at certain peak times, analysts think, it doesn't really help convenience stores to deploy such technology other than from a branding perspective. Long lines are not typically an issue in these stores.

Still, as these stores offer greater amounts of fresh and prepared foods of their own, long lines could become a problem. Having the technology in place early ensures the chains are not left scrambling.

It's clear that more stores will begin introducing technology to speed up the checkout process, though it seems only truly workable on a small scale. The first Amazon Go locations are costing upward of $1 million or so each, and they're only around 1,500 square feet. Larger stores or retrofitting a Whole Foods Market with all the cameras and sensors needed would seem to be prohibitively expensive.

Scan-and-go technology like Sam's Club and 7-Eleven are using could be much more cost effective and deployed in any store, though Walmart did abandon its use in its supercenters. Theft might be an issue, though, as the service relies upon the customer scanning in everything. In contrast, Amazon Go stores omnisciently know everything you've selected and charge you for it.

Still, Walmart will use what it learns from customers at Sam's Club Now and deploy it at both regular Sam's Clubs and Walmart stores elsewhere, and we may yet see scan-and-go return to the supermarket giant.