Supplier warnings knocked down shares of the tech titan yesterday.

Despite its efforts to shift the investing narrative away from unit volumes, Apple (AAPL -3.00%) investors are still fretting about them. That fact was made clear when shares fell yesterday on fears that demand for the newest iPhones may not be as strong as initially hoped, particularly for the iPhone XR, which is more affordable than the flagship iPhone XS and XS Max and was widely expected to drive unit volumes in the fourth quarter.

Are those fears overblown? 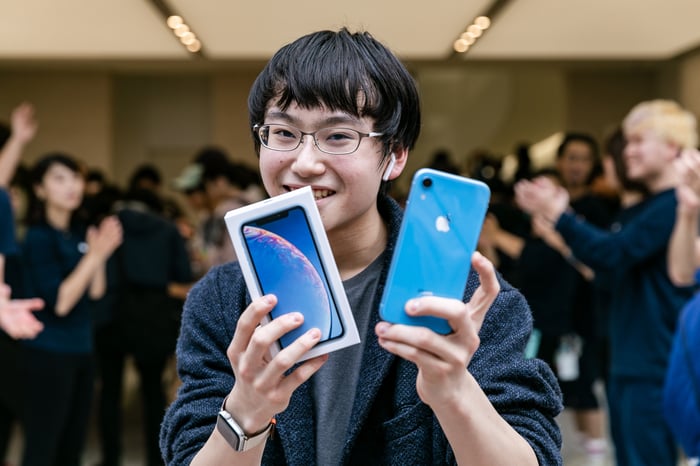 Three prominent Apple suppliers warned yesterday that sales in the fourth quarter may fall short of prior expectations. Most notable was Lumentum Holdings (LITE -1.32%), which supplies vertical-cavity surface-emitting lasers (VCSELs), one of the critical parts of Apple's 3D-sensing TrueDepth camera system. Lumentum drastically cut its outlook for the December-ended quarter (Lumentum's fiscal second quarter), suggesting that iPhone demand is tepid. The revised forecast is significantly lower than the guidance the company issued less than two weeks ago.

At the midpoint, we're talking about a reduction of $72.5 million in Lumentum's sales outlook. "We recently received a request from one of our largest Industrial and Consumer customers for laser diodes for 3D sensing to materially reduce shipments to them during our fiscal second quarter for previously placed orders that were originally scheduled for delivery during the quarter," CEO Alan Lowe said in a statement.

Meanwhile, Apple's own guidance for the December quarter had also fallen short of Street expectations.

Seeing as how the iPhone business still represents over 60% of total revenue, it's not entirely misplaced for investors to worry about unit volumes. However, Apple CFO Luca Maestri believes that "the number of units sold in any 90-day period is not necessarily representative of the underlying strength of our business," which is why Apple will no longer disclose unit volumes at all. The company will instead provide product revenue, while providing new detail regarding gross margin in its increasingly important services business.

In other words, Apple is trying to force investors to stop paying so much attention to iPhone unit volumes, but it's clear that shareholders are still doing just that. It also means that investors will no longer be able to validate those fears. Perhaps once the company starts reporting just how profitable its services business is -- a segment that also lacks seasonality -- investors will finally focus where Apple wants them to.