Just days after unveiling new Macs and iPad Pros, Apple (NASDAQ:AAPL) reported fiscal fourth-quarter earnings to close out its fiscal 2018. While the September quarter tends to be less eventful than other quarters, Apple had some pretty surprising announcements that are especially relevant for investors. The company plans to revamp its financial reporting starting next quarter as it kicks off its fiscal 2019.

There's a lot to cover, so let's dig in. 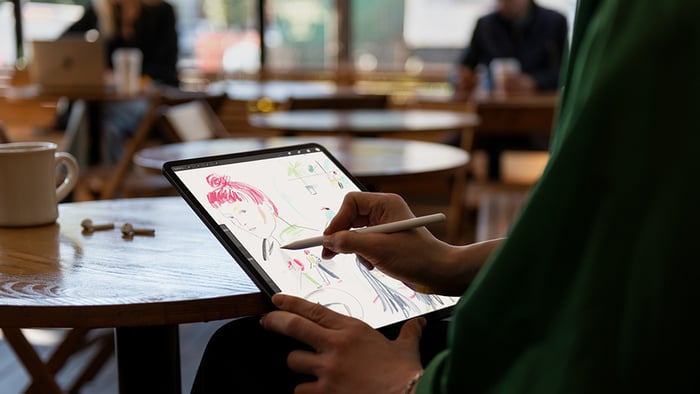 Revenue jumped 20% to $62.9 billion, topping Apple's guidance. iPhone unit volumes were essentially flat at 46.9 million, but iPhone revenue increased 29% to $37.2 billion as Apple continues to exercise its pricing power. That narrative has been playing out ever since the company introduced the $1,000 iPhone X last year. iPhone average selling prices (ASPs) rose to $793, up from $618 a year ago. Apple also sold 9.7 million iPads and 5.3 million Macs, hitting a new all-time record in quarterly Mac revenue in the process.

The all-important services business also hit a new record, bringing in $10 billion in revenue during the quarter. When you exclude the one-time $640 million positive adjustment a year ago, that's good for 27% growth. The Mac maker added another 30 million paid subscriptions during the quarter and now has 330 million paid subscriptions. On a trailing-12-month (TTM) basis, services revenue is now $37.2 billion; Apple is easily on track to hit its $50 billion target by 2020. 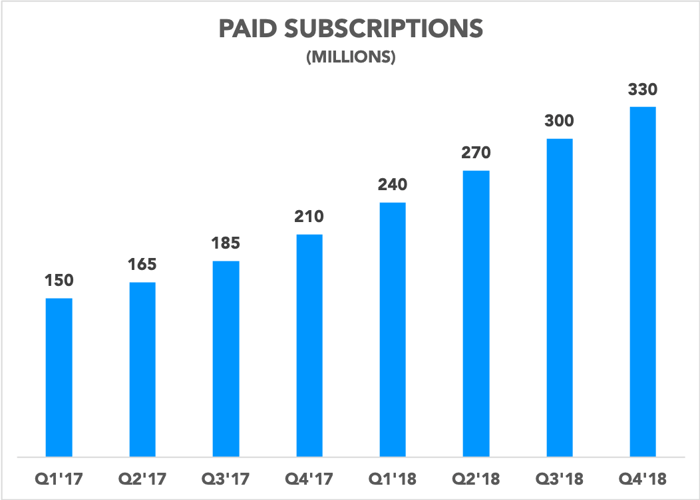 Ever since tax reform was passed in late 2017, Apple has been buying back stock hand over fist. That held true again this quarter, with $19.4 billion in open market share repurchases. 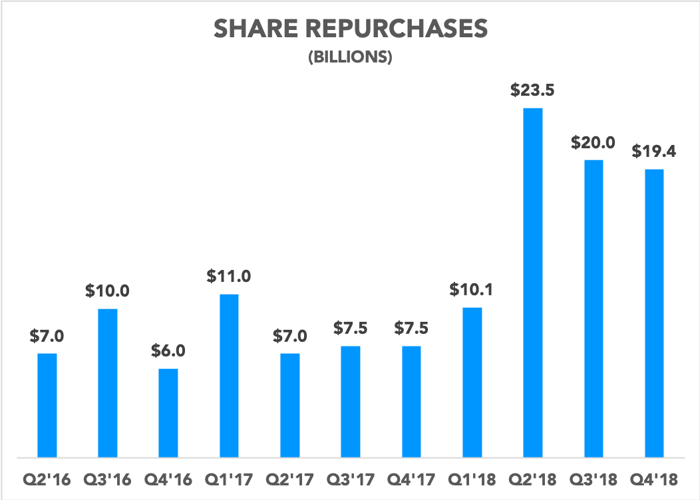 Apple has now repurchased $62.9 billion worth of stock year to date, bringing its cumulative total repurchases to $239 billion. After completing its $210 billion program earlier this year, Apple's board authorized a cool $100 billion program in May. The company also declared a quarterly dividend of $0.73 per share to shareholders of record as of Nov. 12, 2018.

Apple made major announcements regarding changes to financial reporting that it will adopt in the December quarter. In what will prove to be a highly controversial move, Apple will stop reporting unit sales altogether. Over the past couple of years, Apple has been aggressively trying to shift investor focus away from its hardware business (where unit sales are a core metric) toward its software and services business. This has now culminated in eliminating unit sales disclosures altogether.

Our objective is to make great products and services that enrich people's lives, and to provide an unparalleled customer experience so that our users are highly satisfied, loyal, and engaged. As we accomplish these objectives, strong financial results follow. As demonstrated by our financial performance in recent years, the number of units sold in any 90-day period is not necessarily representative of the underlying strength of our business. Furthermore, a unit of sale is less relevant for us today than it was in the past, given the breadth of our portfolio and the wider sales price dispersion within any given product line.

If you wanted to be particularly skeptical, you could consider the change a tacit admission that unit volumes have indeed peaked, and that Apple doesn't want investors to overanalyze minor gyrations on a quarterly basis. It's worth noting that most of Apple's peers do not disclose unit sales data, either. Apple has often bragged that it is an exception in that regard, which will no longer be the case. 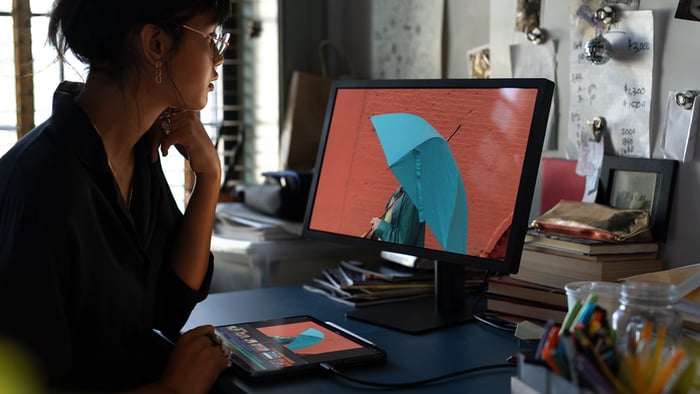 Apple will also broadly categorize revenue between products and services, including more granular disclosures around the cost of revenue for each business. That will give investors a much better sense of Apple's margin profile, particularly for the highly profitable services business. You win some, you lose some.

The Other Products segment will also be renamed "Wearables, Home, and Accessories."

Investors weren't especially impressed with Apple's guidance for the December quarter, sending shares down in after-hours trading last night. The company expects revenue in the December quarter to be $89 billion to $93 billion, or 3% growth at the midpoint. Gross margin should be 38% to 38.5%, with operating expenses of $8.7 billion to $8.8 billion.

The Street had been modeling for $92.9 billion in sales, meaning Apple will have to hit the high end of its outlook to meet expectations. So much for a $100 billion quarter. At least Apple will end up selling roughly $1 billion worth of products per day over the holidays.