The iPhone giant said it would stop disclosing a key metric to analysts and the public.

Despite its recent post-earnings sell-off, Apple (AAPL 3.60%) has been on a terrific run in 2018 -- actually, over the past two years. Still, its market valuation has been discounted compared to other big tech names, such as the other FAANG stocks: Facebook, Amazon, Netflix, and Google parent Alphabet. You can see in the chart below that its forward P/E lags those of the others. 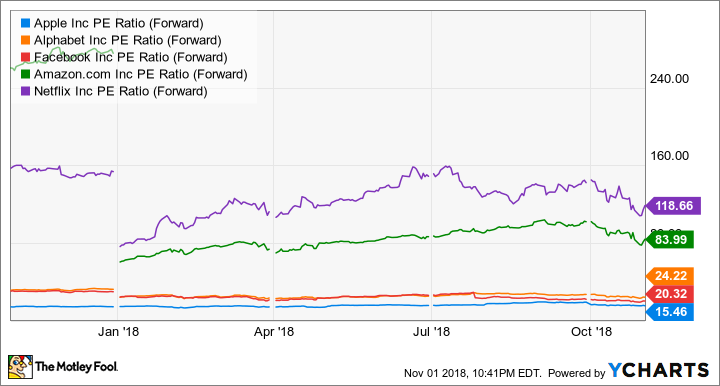 That discount is because Apple, unlike the others stocks, is thought of first and foremost as a hardware company. Combined, the iPhone, iPad, Mac laptops, and "other" products (such as headphones) added up to 84% of sales last quarter, with almost 60% coming from the iPhone.

Because the iPhone has been such a dominant product for Apple's top line, the number of iPhone units moved has become somewhat of an obsession for analysts and investors. But on its recent fiscal fourth-quarter call, the company announced it would stop disclosing unit metrics for the iPhone, iPad, and Macs to the public. 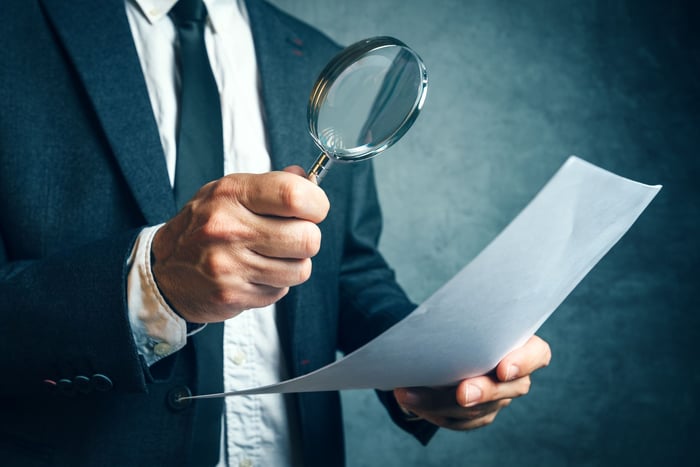 For skeptics, the first reaction is likely negative. Why is Apple taking away information? What's the company hiding? Is it because iPhone unit sales will decline next year?

In the just-reported quarter, Apple reported flat iPhone unit growth, even as iPhone revenue skyrocketed 29%! The ASP of iPhones rose from $618 to a whopping $793 on the back of the XS and XS Max release in September.

Skeptics might also point out that if unit sales aren't disclosed, investors won't know how much the company is raising prices. This could also be seen as Apple's efforts to escape scrutiny over continual price increases.

On the other hand, it doesn't much matter if Apple hikes prices and consumers are still willing to pay. That just shows the increasing value customers see in the iPhone and broader Apple ecosystem. The company is looking to enhance its moat through investments in things like payments, facial recognition, security, and health monitoring.

The increasing set of features has allowed the company to sell a wider range of phones at various price points, from the ultra-high-end iPhone XS to 2016's lower-priced iPhone SE geared for emerging markets.

As Maestri said during the conference call: "As demonstrated by our financial performance in recent years, the number of units sold in any 90-day period is not necessarily representative of the underlying strength of our business. Furthermore, a unit of sale is less relevant for us today than it was in the past given the breadth of our portfolio and the wider sales price dispersion within any given product line."

CEO Tim Cook reminded listeners on the conference call that while iPhone units were flat in the quarter, the overall installed base grew double digits, meaning a lot of customers picked up the company's devices for the first time.

Expanding the ecosystem will help it sell more services, the revenue from which was up 17% last quarter to almost $10 billion, nearly 16% of the total. In addition, iPhone customers tend to stick with the prestige Apple brand once they're in -- even if they're purchasing new phones at a slower pace than in the past.

Apple's interpretation of its unit figures, in my opinion, is spot-on: Apple is a premium ecosystem, not just a commodity hardware producer. That's the reason Warren Buffett invested in the company beginning in 2016.

The company doesn't have to worry about price the way other companies do. As an example, say your iPhone lasts longer than it did before -- let's say three years, instead of two, thereby extending the phone's life by 50% -- that means consumers will likely accept price increases up to 50% per phone, and still feel like they are getting a good value (assuming each generation of phones has increased durability and functionality). That increased value proposition would still fall into the revenue and profit lines, which is what investors should care about, even if the units-sold number stagnates or declines.

Still, Apple seems like it's trying to steer investors into seeing the company in its preferred way. It happens to be the correct way, in my view, but if other parts of the investing community want to judge the company based on iPhone units sold, so what? I'd rather the company err on the side of more disclosures, not fewer.

The bottom line is, investors shouldn't fret about this change in disclosure. Apple's still a buy based on its brand pricing power and sticky ecosystem.