Apple (NASDAQ:AAPL) is just as much a marketing company as it is a tech company. Sure, the latest iPhones, iMacs, and Apple Watches all need to be technically sound, even advanced. Still, Apple has never needed to be a first mover on most technological innovations. Rather, the company has often taken the latest technology and perfected it under the powerful Apple brand. Elevating technology to the level of a luxury item was the real genius of Steve Jobs, not any particular invention.

Marketing savvy isn't just about commercials. How one sells something (the Apple store) is important, too. Pricing strategy is hugely important -- especially for investors.

This is especially true when one is selling a "prestige" product like the iPhone. Apple has always positioned itself in the high-end segment of the smartphone market, but in recent years, it has given consumers more choices. Last year, the company released two different models for the first time, the iPhone 8 and iPhone X. This year, the company is at it again, releasing the iPhone XS and XS Max, along with the lower-priced iPhone XR.

The XS and XS Max feature a superior OLED screen and "breakthrough" dual-camera system (Apple's words), starting at $1,000 to $1,100, while the XR has an LCD screen (though one bigger than the regular XS) and a single camera, starting at $750. While the XR has a lower price point, it actually has one superior feature: battery life. 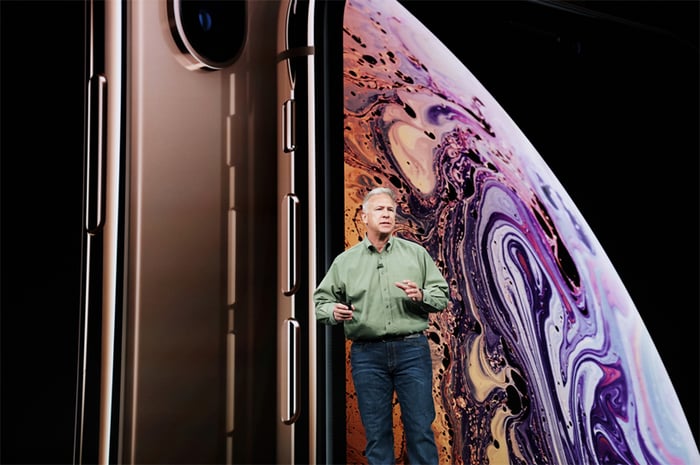 Back in 2017, the iPhone 8 came out before the higher-priced iPhone X because the X was delayed due to manufacturing bottlenecks. While both were announced in September, the X didn't make it to consumers until early November. That actually crimped sales in the September–October time frame, as many waited until the X's release to make a decision.

This year, however, Apple is changing tack, and for the better. The more expensive XS models were released Friday, Sept. 21, while the lower-priced XR won't ship until Oct. 26. Here's why this is a much, much better strategy than last year's snafu.

The tactic appears to be an adapted form of a "skimming" marketing strategy.

"Skimming" refers to introducing a product at its highest possible price point, then dropping it slowly over time. By doing so, one "skims" the most sales from each segment of customers at the earliest possible moment, thereby quickly recovering costs. The strategy, unsurprisingly, often works best with a sought-after prestige product (such as an iPhone), where certain fanboys and fangirls desire a product as soon as possible. This quickly recovers the high costs associated with manufacturing and research and development. After the initial demand is exhausted, the company will lower the price, bringing in the next rung of demand.

Again, Apple isn't doing this exactly -- skimming usually applies to a single product that changes price over time (though Apple did do this with older iPhone models). Here, there are two different Apple products. Still, the marketing principle is the same.

Is this an experiment?

From its experience last year, Apple knows that people wanted to check out the higher-end phone before making a decision. So, this year, Apple will be limiting customers to only the high-end phone for two months.

It is unclear whether this is intentional or an experiment. Clearly, some customers wanted to wait for the X's release last year. The question is, will they wait for the XR? If yes, then the staggered release won't matter. But if not, incremental customers might just buy the XS without even waiting to compare it to the XR. Given the huge number of iPhones that Apple sells, any incremental XS buyer that would have otherwise opted for the XR will generate higher profits  than would otherwise be the case.

Profits and dollars, not units

Despite its astonishing profitability, Apple typically trades at a lower valuation than the typical FANG stock. That's because investors are wary of how much growth there is ahead for the iPhone franchise. A large part of the developed world now owns a smartphone, and the upgrade cycle has lengthened.

Still, investors should take heart that the company's marketing machine is firing on all cylinders, finding more and more opportunities to wring profits from the iPhone franchise. Last year saw the introduction of the "ultra-premium" iPhone (the X), and now this year, the company's release schedule is yet another way to tease more incremental dollars from its massive customer base. While huge growth might not be what it once was, the company still gushes cash and earns huge returns on capital. More than any particular product, Apple's luxury marketing strategies should keep those dividends flowing for years to come.