Please ensure Javascript is enabled for purposes of website accessibility
Log In Help Join The Motley Fool
Free Article Join Over 1 Million Premium Members And Get More In-Depth Stock Guidance and Research
By Adam Levine-Weinberg – Nov 14, 2018 at 7:09AM

An increased emphasis on seasonal flying should help Spirit Airlines return to margin expansion next year.

Spirit Airlines (SAVE 0.25%) has experienced severe margin erosion over the past three years, driven by persistent unit revenue weakness and a rebound in oil prices. For the first nine months of 2018, Spirit's adjusted pre-tax margin was 11%, down by more than half compared with the same period in 2015.

However, Spirit Airlines finally returned to unit revenue growth last quarter. It expects to post another strong increase in revenue per available seat mile (RPASM) in the fourth quarter. As a result, Spirit Airlines stock has rallied 50% since late June, recently reaching a 52-week high. 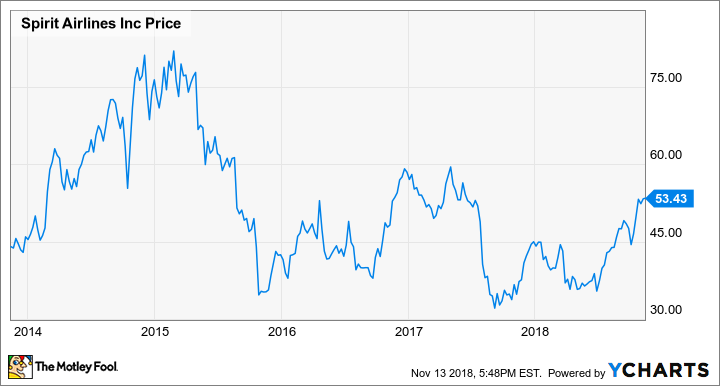 A growing emphasis on seasonal flying -- and on growth in markets with steadier demand throughout the year -- has helped power this turnaround. As Spirit Airlines continues down this road, its stock could keep rising toward its late-2014 all-time high.

In the first few years following its 2011 IPO, Spirit Airlines successfully expanded with a focus on serving price-sensitive travelers in some of the biggest hub markets, such as Chicago and Dallas-Fort Worth. However, beginning around 2015, the legacy carriers became very aggressive about matching ultralow-cost carriers' prices in their hubs. This caused Spirit's unit revenue to plunge.

In early 2016, Bob Fornaro took over as CEO. Over the past three years, he has implemented a new route strategy designed to reduce Spirit's vulnerability to price-matching -- and to industry fare wars more generally.

This strategy has involved a huge amount of growth in Florida. Whereas "east-west" routes between major hubs tend to experience a huge drop-off in demand during the fall and winter seasons, Florida routes don't see as much seasonal variation in demand. Some Florida routes even perform better during the winter as travelers look to escape the cold. More recently, Spirit Airlines has looked to expand in secondary markets in Florida, such as Tampa, Fort Myers, and Jacksonville. (Fort Lauderdale and Orlando are Spirit's main focus cities in Florida.) It has also pursued growth in the Caribbean and Latin America, while continuing to cut back in east-west markets where demand is weak outside of the summer peak season.

Over the past year or so, Spirit Airlines has started to emphasize seasonal flying as another tool for maximizing unit revenue. Seasonal flying adds operational complexity, as staffing levels at different airports must vary seasonally, but it enables Spirit to serve markets with highly seasonal demand in the summer, while moving that capacity to Florida and other less-seasonal markets during the off-season.

Last week, Spirit Airlines began 19 seasonal routes to Florida, serving mainly Fort Myers and Tampa. (It operates most of its routes from Orlando and Fort Lauderdale year-round.) In total, Spirit's capacity to Florida will jump more than 50% this winter compared with the summer season, with an average of 178 daily round-trip flights -- up from 116 over the summer.

The seasonal Florida routes that started last week will run through early May, after which the capacity will be reallocated to markets that perform better during the summer.

The turnaround is just getting started

Spirit Airlines has achieved consistent double-digit revenue growth over the past few years, and that should continue for the foreseeable future. However, margin pressure has prevented it from translating this strong revenue growth into a comparable level of earnings-per-share growth.

Spirit's route changes over the past few years have finally put its unit revenue back on a positive trajectory. Its growing emphasis on seasonal flying should add to this momentum, particularly during the fourth and first quarters. Meanwhile, oil prices have moved sharply lower in recent weeks, potentially allowing Spirit Airlines to return to meaningful margin expansion next year.

Analysts already expect Spirit Airlines' revenue to rise about 16% in 2019. If the carrier's profit margin improves significantly, that could drive a huge jump in EPS.

Spirit Airlines stock currently trades for less than 12 times the company's projected 2019 EPS. And if oil prices remain closer to today's levels than the prices seen just a month ago, EPS could come in well above analysts' estimates next year. That could drive the stock much higher -- potentially challenging its all-time high of more than $85.