Please ensure Javascript is enabled for purposes of website accessibility
Log In Help Join The Motley Fool
Free Article Join Over 1 Million Premium Members And Get More In-Depth Stock Guidance and Research
By Jeremy Bowman, Keith Noonan, and George Budwell – Nov 15, 2018 at 12:00AM

If you're looking for a solid income stream to complement Social Security and saving, check out these three great dividend stocks.

Retirees are looking for safety and a reliable income stream from their investments. Therefore, they tend to avoid riskier growth stocks and fickle industries like tech, which are vulnerable to the next big thing. Instead, those in their golden years generally focus on defensive sectors like consumer staples, telecoms, or healthcare. 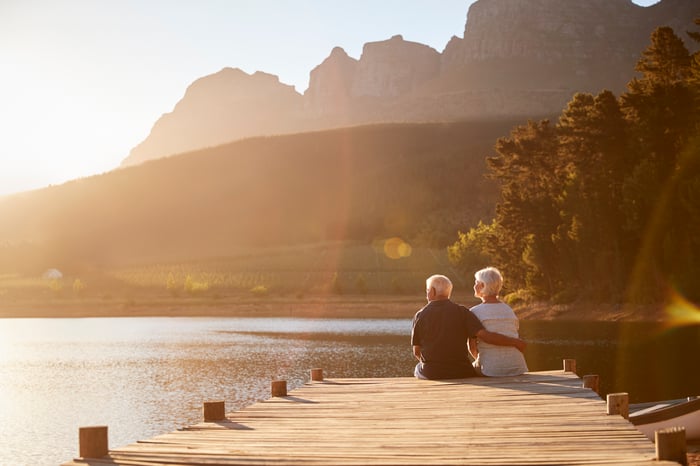 George Budwell (Pfizer): If you're looking for a fairly safe income play in your retirement years, big-pharma giant Pfizer should definitely be on your radar. As proof, Pfizer's shares have not only defied the market's hefty downturn this year, but its stock has actually gained a healthy 20.1% in 2018. Pfizer has thus produced a total return on capital of 24.5% so far this year for its shareholders (share price appreciation plus dividend payments). That's an exceptional return on capital for any large-cap dividend stock -- especially during a particularly moody market like this one.

Can Pfizer keep churning higher? While it's true that Pfizer is heading into some rough territory with the patent expiration for its nerve pain medication Lyrica, shareholders shouldn't worry too much about this particular headwind. After all, the drugmaker's robust clinical pipeline has already produced a series of new high-value medications, such as Talzenna, Vizimpro, and Lorbrena, in recent months. And this favorable trend should continue for the foreseeable future, with the drugmaker sporting a whopping 28 late-stage clinical candidates at the moment.

Perhaps the best part for income investors is that Pfizer's dividend seems to have ample room to grow. With a trailing payout ratio of only 33% (among the lowest within its peer group) and a steadily rising top line, Pfizer can easily support additional hikes to its dividend over the next year or so.

Keith Noonan (Realty Income): Investing in the retail sector at a time when e-commerce trends are placing mounting pressure on brick-and-mortar outlets might sound dubious, but Realty Income appears to be positioned to withstand those catalysts, and it has qualities that make it an ideal investment for retirees.

The company is a real estate investment trust (REIT), and its business revolves around renting retail properties to commercial lessees. However, while the overall brick-and-mortar-retail industry will continue to face pressure from the rise of online competition, Realty Income's customer base is heavy on gyms, bargain-priced outlets, convenience stores, and other businesses that are at less risk of e-commerce disruption. With the company's occupancy rate at the end of its September quarter coming in at a decade-long high of 98.8%, there's little sign of online retail destabilizing its business.

Giving itself the name "the monthly dividend company" and living up to that moniker, Realty Income has delivered 579 consecutive monthly payouts to shareholders and increased its payout 98 times since going public in 1994. Shares yield roughly 4.2% at current prices, and shareholders don't need to worry about the company suspending its dividend. As an REIT, Realty Income is subject to special operating and financial standards, one of which requires the company to return at least 90% of its earnings to shareholders in the form of dividend payments.

With its sturdy business, sizable yield, and fantastic history of dividend growth, Realty Income has the makings of a top stock for retirees.

Jeremy Bowman (AT&T): If you're looking for a rock-solid dividend payer, it's hard to find a better candidate than AT&T. The country's No. 2 telecom provider is a Dividend Aristocrat, having raised its dividend annually for 34 straight years, and is in a promising position to grow with its recent takeover of Time Warner and the ongoing rollout of 5G. With its Time Warner acquisition, the telco giant has one of the strongest sets of assets in entertainment, with satellite-TV provider DirecTV, networks including HBO, Cinemax, TNT, TBS, and CNN, the Warner Bros. studio, a leading mobile network, and home internet service. In the most recent quarter, it added 4.3 million wireless subscriptions, 3.4 million of which were in the U.S., and mobility revenue increased 2.3%. Adjusted earnings per share jumped from $0.74 to $0.90 with the help of a lower tax rate.

Now may be an especially good time to pick up some shares of AT&T, as the stock is selling at a discount after falling 22% this year, giving it a dividend yield of 6.5% and a P/E based on this year's expected earnings less than 9. Its payout ratio is also reasonable at 58%.

Like most cheap stocks, AT&T is not without its challenges, as the company has a huge debt burden after the Time Warner acquisition at $168.5 billion, which is weighing on profits, but that deal should give the telecom increased cash flow to pay off its debt. In addition to its formidable position in the fast-growing streaming market, the company should also grow revenues as it expands 5G service to more cities.

Add it all up and you have a cheap, high yield-stock with a strong position in telecommunications and potential growth coming from streaming entertainment. That looks like a solid choice for a retiree looking for a reliable income stream.