Please ensure Javascript is enabled for purposes of website accessibility
Log In Help Join The Motley Fool
Free Article Join Over 1 Million Premium Members And Get More In-Depth Stock Guidance and Research
By Leo Sun - Nov 15, 2018 at 8:48AM

Is the world’s top casino company a reliable source of dividend income?

Shares of Las Vegas Sands (LVS 5.86%) fell about 25% this year amid concerns about slowing growth in Macau and trade tensions between the US and China. However, Sands' stock doesn't look expensive at 15 times this year's earnings, and it pays a hefty forward dividend yield of 5.7%. Should investors buy Sands for that high yield, or stick with more conservative dividend stocks instead?

How sustainable is Sands' dividend?

Sands raised its dividend annually for seven straight years. It spent only 86% of its adjusted EPS on that dividend over the past four quarters, but that payout ratio is steadily rising.

Analysts expect Sands' EPS to rise 12% to $3.39 per share this year, which will cover its dividends of $3.00 with a payout ratio of 88%. However, Sands' earnings are expected to rise less than 1% to $3.41 next year, which means that its next dividend hike could boost its payout ratio into the lower 90s.

Why is Sands' growth decelerating?

Sands' earnings growth is decelerating due to a slowdown in Macau, which generated 69% of its hold-normalized adjusted property EBITDA during its third quarter. Here's how much Macau's gross gaming revenue (GGR) growth decelerated this year:

Macau's gaming revenues are still rising, but they face increasingly difficult year-over-year comparisons. Sands' rival Wynn Resorts (WYNN 12.05%) also recently warned of a "slowdown" in Macau, which sank casino stocks across the board.

However, Sands CEO Sheldon Adelson retained an upbeat view of Macau during the third quarter conference call, stating that the company remained "steadfast in our conviction that Macau will realize its vision and evolve into Asia's greatest leisure and business-touring destination."

The bulls also claim that other catalysts -- including new properties in Macau, the new Hong Kong/Zhuhai/Macau bridge, stimulus measures in China, and Sands' expansion plans for Japan -- should offset Macau's slower growth. 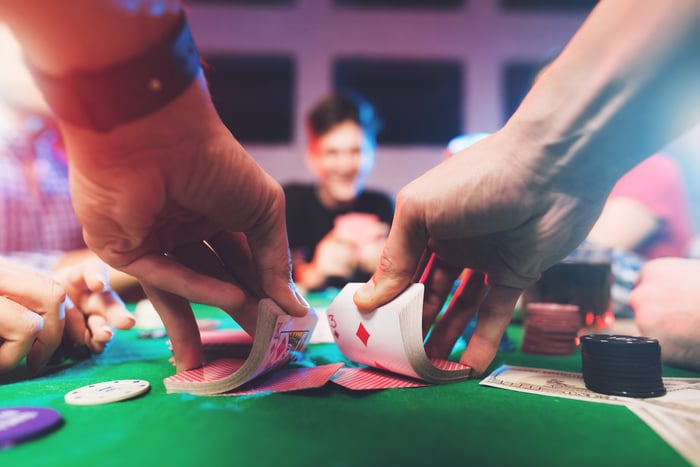 But that's not the only problem...

Macau will remain Sands' core growth engine, but Marina Bay Sands in Singapore -- which accounted for 31% of its hold-normalized adjusted property EBITDA last quarter -- remains a weak link as it struggles to offset its weaker high-margin gaming revenues with lower-margin non-gaming revenues. Here's how it fared against Sands' other businesses last quarter:

That's troubling, because Sands is using Marina Bay as a reference design for its $10 billion MICE (meetings, incentives, conferences, and exhibitions) expansion plans for Japan. If that big bet backfires, one of Sands' biggest long-term catalysts could become a major headwind.

Sands and Wynn are both more heavily exposed to the Macau market than MGM Resorts (MGM 11.30%), which generates most of its revenue from its properties in Las Vegas and other American cities. MGM's exposure to Vegas was considered a headwind in the past, and was exacerbated by the mass shooting at its Mandalay Bay Casino last year. However, it's now becoming a tailwind as it sidesteps its rivals' challenges in Asia.

That's why analysts expect MGM to post double-digit earnings growth next year as Sands ekes out 1% growth and Wynn faces an 8% drop. MGM's stock is pricier than Sands at nearly 20 times forward earnings, and it pays a lower forward dividend yield of 1.7% -- but it could be a more reliable casino play than Sands or Wynn.

Stick with other high yielders instead

I sold my shares of Sands back in August because I believed that the risks outweighed the rewards. It's not bad as a dividend play, but investors can find plenty of other stocks with higher yields, lower valuations, and stronger near-term catalysts than Sands after the recent market downturn.