The tech titan might have a Core i7-based MacBook Air waiting in the wings.

Now, something that's unusual about the new laptops is that Apple is only offering them in a single processor configuration -- Core i5-8210Y. (The "Y" suffix denotes that this chip is from Intel's ultra-low-power line of Core processors.) 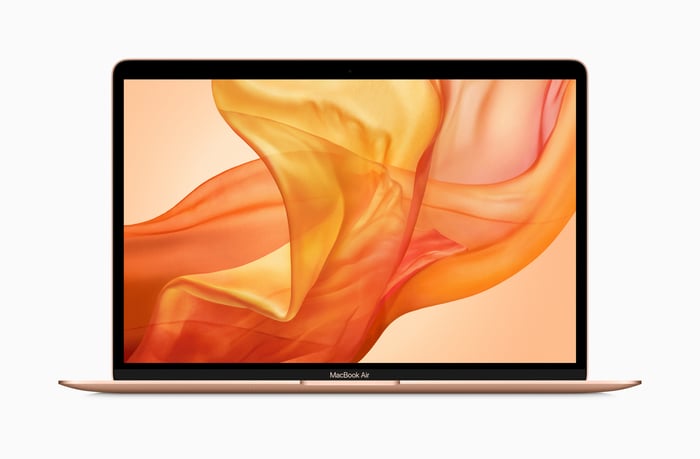 Typically, computer makers -- Apple included -- offer multiple processor options as a quick and easy way to encourage customers interested in more performance to shell out more money. Both system vendors and Intel have a vested interest in getting customers to buy computers with higher-end chips since to the extent that buyers do that, those parties enjoy higher revenue and profits.

That's why it was surprising to see that Apple didn't release a version of the new MacBook Air with a higher-end Core i7.

It would seem that one might be in the works after all. Let's take a closer look.

On Slash Leaks (via MacRumors), a user posted a screenshot showing a Geekbench 4 performance test result of a device running Mac OS 10.14.1 with what appears to be an Apple-designed motherboard (MacRumors says the device's "logic board has the same part number as the new MacBook Air") and a Core i7-8510Y chip.

Put simply, it looks like the Core i7-8510Y is an unreleased member of Intel's low-power Amber Lake family of processors -- one that's quite possibly custom-developed for Apple -- that's faster than what Intel has announced so far.

MacRumors concludes that "there is possibly a new MacBook Air with a Core i7 in the wild that Apple decided not to ship or may ship at a later date."

There are a number of potential explanations for what's going on here. Here's MacRumors' take: "Why the MacBook Air with a Core i7 wasn't released is anyone's guess -- maybe it ran too hot, or Apple elected to keep the dual-core Core i7 a MacBook Pro option, or something else. "

I'm going with "something else."

Indeed, I believe that the Core i7-8510Y, due to its relatively aggressive specifications, is meaningfully more difficult for Intel to produce in quantity than any of the other members of the Amber Lake family that have been announced to date.

What might be happening here, then, is that Apple -- not wanting to delay this long-awaited MacBook Air refresh any further -- simply released the Core i5 variant of the device with the chips that it can buy from Intel in high quantities. Then, once Intel is in a position to supply Apple with the higher-end Core i7-8510Y chips in high volumes, Apple could add that processor as an option for its customers.

This would make sense from Apple's perspective because it might not want to take a bunch of orders for configurations of the new MacBook Air that it couldn't ship in a reasonable amount of time. Instead, it might make sense for Apple to make customers think that the Core i5 model is as good as it gets so that potential buyers don't hold off on their purchases until a potential Core i7 model makes it out.