Helios and Matheson reduces usage for its money-draining multiplex buffet, but there's a greater cost to pay.

Congratulations, MoviesPass! You finally have a business model that's on the brink of being financially feasible because nobody is using it. Kudos?

We now have a little more insight into the aftermath of the dramatic life-preserving measures that MoviePass parent Helios and Matheson Analytics (HMNY) has been instituting this summer. It's not pretty. Helios and Matheson is posting sequential improvement in its operating loss for the third quarter, but it's only because it experienced a "significant decline" in subscribers. MoviePass had 3 million members at the end of June, peaking at 3.2 million by mid-August when it began to tighten the screws on the service's flexibility. MoviePass isn't telling us how many subscribers is has now or at the end of September. Helios and Matheson used to brag about its subscriber tallies, but it's not a surprise to see it tight-lipped on the way down. 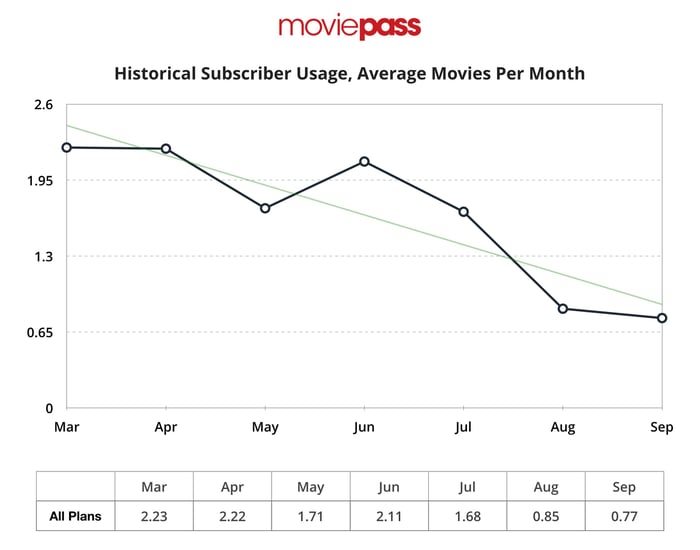 It's a backhanded compliment

One of the bigger nuggets from its latest financial report is that the average monthly usage per MoviePass subscriber slipped to 0.77 for the month of September. It was as high as 2.23 in March. Helios and Matheson kicks off its earnings release with a graph detailing the decelerating utilization. The only graph that it could've opened with packing a steeper slide would be its stock chart.

A lot has changed since MoviePass weaned members off of the original plan with unlimited daily screenings. It has capped usage at three films a month, and has gone on to make that even more challenging by limiting the available movies, showtimes, and theaters where a MoviePass debit card-wielding member can go to catch a flick.

Helios and Matheson seems to be bragging that the average person paying the same $9.95 a month is only watching a third of the movies that he or she was sitting through six months ago. Doesn't this mean that the value proposition is two-thirds less appealing now?

Things may be even uglier than the number suggests. After all, that 0.77 average means that for every member taking advantage of the plan by catching three movies in September there were three other members that didn't use MoviePass at all. Did they not find the hoop-hurdling process worth it? Did they cancel -- or at least think they canceled -- only to keep getting billed on MoviePass' rolls?

This is now AMC Entertainment's (AMC -9.12%) turf. AMC Stubs A-List has jumped to 500,000 members since the subscription service's summertime launch. AMC Entertainment's service actually works as intended, and it should be financially feasible given the multiplex giant's control over input costs and its ability to score high-margin concession sales. MoviePass is boasting about shrinking usage -- even as it still spent more on tickets than it received in subscription revenue for the entire third quarter -- but it's a ploy to please near-sighted investors who don't realize where this ultimately ends.