Like a Payless shoe store in a tremor, the shoes keep dropping at MoviePass. Helios and Matheson Analytics' (OTC:HMNY) majority-owned movie service announced its latest cost-cutting move late last week, eating into the benefits of subscribers who paid for discounted annual memberships earlier in the year.

MoviePass has been curbing member usage of its multiplex smorgasbord in an attempt to stay in business, but previous changes were limited largely to inconveniencing the month-by-month subscribers that make up the lion's share of what is likely the platform's now-declining user base. MoviePass emailed many of its annual members on Friday, letting them know that they will now be limited to the same restriction of catching just three movies a month from a handful of MoviePass-selected films. Annual subscribers were able to watch as many as a movie a day before the new changes. 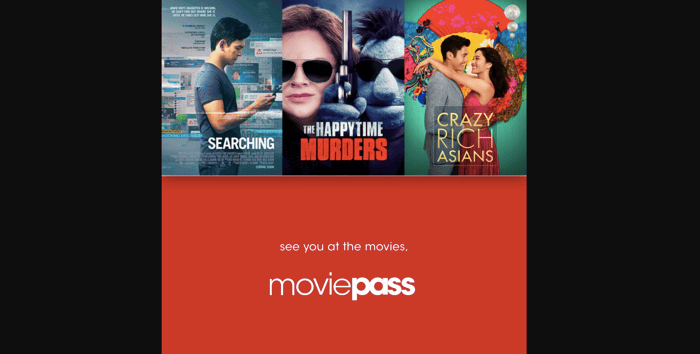 The MoviePass model that helped take the namesake service from 15,000 members last summer to 3.2 million subscribers at its peak earlier this month was never going to be sustainable. Letting folks watch daily screenings for $9.95 a month when it has to pay retail for most of its tickets puts it in the hole from the first flick. Helios and Matheson recently posted an operating loss of $234.4 million through the first half of the year, and it's smarting for cash.

Helios and Matheson has argued that it can use the MoviePass subscription as a loss leader, eventually making up more than the difference between the subscription fees and what its pays for tickets through advertising and selling consumer data, but that's not a feasible goal. MoviePass has overestimated what companies are willing to pay for limited data points on penny-pinching members. Less than 2% of its revenue this year is coming from marketing and promotional services.

MoviePass has tried to get theater operators to offer it discounted tickets or a piece of the concession sales, but the leading exhibitors view the platform as a value-diminishing enemy instead of an ally. AMC Entertainment (NYSE:AMC) has been trolling MoviePass in its quarterly earnings calls since last year. It also took a page out of the MoviePass playbook when it launched AMC Stubs A-List, a more sustainable plan because it can actually control the input costs. AMC Stubs A-List has quickly lined up 260,000 members willing to pay twice as much as MoviePass for a superior membership plan with staying power.

The disintegration of the MoviePass model has been swift. It initially eliminated the ability for members to see a film that they've already seen on the plan and requiring users to submit photos of ticket stubs to prevent fraud. With financing starting to dry up and profitability nowhere in sight the steps have intensified this summer. Monthly and now most annual subscribers are limited to just three movies a month, and on any given day, MoviePass is only making a couple of mainstream and indie films available. Discounts on subsequent out-of-pocket films are in the works, but the app has been glitchy on check-ins for weeks. Social media hasn't been kind as MoviePass members discover that it's no longer possible to screen a ton of movies on someone else's dime.

Making MoviePass more complicated and difficult to use at a time when AMC and its peers are rolling out seamless alternatives could spell the end for the once-disruptive pioneer. With defections rising and the financial means to attract new subscribers dwindling, MoviePass is on borrowed time.