Please ensure Javascript is enabled for purposes of website accessibility
Log In Help Join The Motley Fool
Free Article Join Over 1 Million Premium Members And Get More In-Depth Stock Guidance and Research
By Chris Neiger - Nov 17, 2018 at 8:49AM

It's been a rough ride for GroPro (GPRO -2.68%) investors over the past few years, and 2018 has continued that trend. Falling revenue, declining camera unit sales, and the company's failure to profitably expand into new markets beyond its core action-camera business have all taken their toll on the company's share price.

GoPro stock is down about 28% so far this year, and even the company's relatively strong third-quarter results, which it reported on Nov. 1, weren't enough to boost investor confidence. 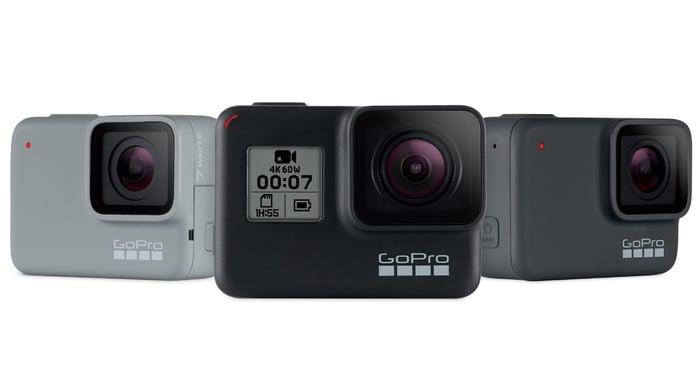 GoPro started 2018 in the worst possible way: Its shares tanked 28% in January after the company released its fourth-quarter 2017 and full-year results. The company's sales had fallen by a staggering 38% year over year, a decline it pinned in part on the $80 million it spent on price protection for several HERO camera models, as well as losses from its now-defunct Karma drone.

The stock price experienced a lot of dips and pops after that, but it never fully recovered from the January slump. Investors overall have remained skeptical that GoPro's management is successfully turning the company around. That pessimism is rooted mainly in the revenue losses across the past few quarters. For instance, in Q1, sales were down by 7% compared the year-ago quarter. And in Q2 and Q3, revenue dropped by 5% and 13%, respectively. 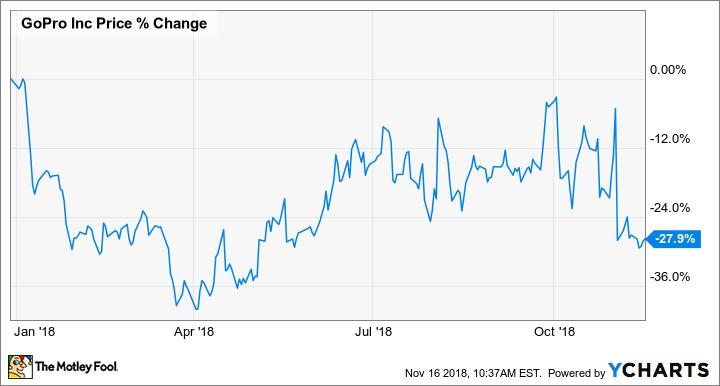 To make matters worse, GoPro's management said on the Q3 conference call on Nov. 1 that it was cutting its Q4 sales forecast from the previous  $390 million to $400 million range to a $360 million to $380 million range.  The shift in outlook was driven by "the higher-than-expected selling of HERO7 units in Q3 as well as the cost of additional promotions in the fourth quarter." The company is offering more promotions during the holiday season to move its lower-end cameras, which aren't selling well. But investors took the news hard, and pushed the share price downward again.

Where GoPro goes from here

Management expects to the company be profitable in Q4, and for the second half of 2018. But it's still struggling to convince its customers to replace their action cameras in a similar way to how consumers upgrade to new smartphones every few years. That's problematic, because as of now, GoPro's completely dependent on sales of new cameras to generate its sales and earnings. It simply hasn't been successful in generating significant revenue from anything else (consider its failed Karma drone and its virtual reality rig).

GoPro's 28% share price drop in 2018 so far is part and parcel of a much larger slide. Over the past three years, the stock has fallen about 74%. With the company still trying to find the right strategy to boost sales long term, investors should expect more of the same from GoPro's shares heading into 2019.