If you haven't already joined the warehouse shopping club, now might be the perfect time.

Costco (COST 1.24%) members are so loyal to the warehouse retailer that they might be better described as "fans" than "customers." The overwhelming majority of its subscriber base renews its membership in a given year, in fact, as they demonstrate with their wallets that they're happy about the savings they get on things like groceries, clothing, consumer electronics, and gasoline.

But for people who don't shop at Costco regularly, is an annual membership worth signing up for just to take advantage of seasonal deals around the Black Friday weekend?

In a word, absolutely. 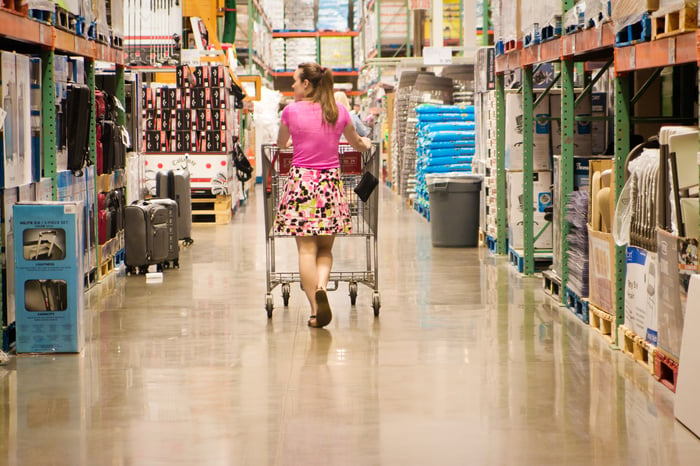 Costco charges $60 for its basic household membership, which gets you access to its network of 531 warehouses around the country for a full year. Sure, you can avoid a charge like that by shopping at other value-focused retailers who don't operate as subscription clubs. Both Target (TGT 2.23%) and Walmart (WMT -0.73%) offer competitive prices on many of the same products that Costco sells, for example, and they have many more locations that are likely to be convenient to you. Each of these rivals has aggressive promotions lined up for Black Friday, too.

But the Costco membership fee is completely optional. That is to say, you don't have to pay it if you aren't thrilled with the savings that you're getting.

Costco offers a full refund -- not a prorated refund -- on any subscriber cancellation. "We will cancel and refund your membership fee in full at any time," the company notes in its subscriber fine print, "if you are dissatisfied." Costco can get away with such a generous cancellation policy because its price leadership is undisputed, as illustrated by the fact that over 90% of its subscribers pay to renew each year.

Getting the most out of your membership

We've established that there's no actual financial risk in trying out a Costco membership, but how can you get the most value out of your subscription over the Black Friday week? First off, understand that while it has a large online presence, Costco prefers to do most of its selling through its warehouses. "First and foremost," executives told investors recently, "we want to get you to the facility."

That means you'll have to visit a store to find some of its best deals on Black Friday. These discounts reflect Costco's wide selection of product categories and include consumer electronics like TVs (a 55" Visio 4K LCD is going for $450), laptops ($90 off a Dell touchscreen), gaming devices ($70 off an Xbox One X bundle), and smartwatches ($50 off a Fitbit Versa). There are also attractive discounts on its more traditional bulk merchandise like bread rolls, chicken breasts, and beef.

Costco knows that customers are increasingly choosing to skip the Black Friday crowds, and so online-only promotions will be available beginning on Thanksgiving Day, when the retailer's warehouses are all closed. These deals include $70 off an Apple iPad and $200 off a gaming PC monitor from LG. There's even a $100 discount on a queen-size mattress ordered online, which helps illustrate how Costco is investing aggressively in building out its e-commerce delivery infrastructure.

If you're in the market for any of these products, a single purchase on Black Friday would likely earn you back the $60 you'd paid for your annual membership. At that point, you can easily cancel if you'd prefer.

Holding on to your Costco card might prove more valuable to you over the year, though, as you join the ranks of 41 million households that help make the warehouse giant the world's second-biggest retailer, behind Walmart.