Strong performances for legacy titles and new releases have helped the video-game publisher's stock come out ahead in a volatile year.

Take-Two Interactive (TTWO -0.86%) stock's roughly 3% year-to-date stock gains might not sound like much, but the performance actually looks pretty impressive when stacked against its gaming industry competitors and other growth-dependent tech stocks. 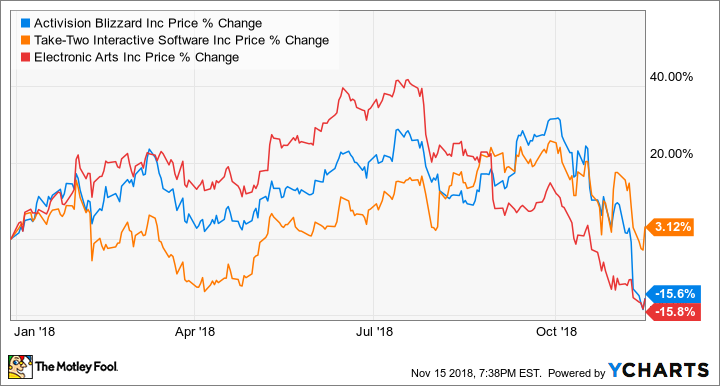 Of the three major American video-game publishers, Take-Two is the only one not to be down double-digits on the year -- with rivals Activision Blizzard and Electronic Arts each posting declines of roughly 16% in 2018. Strong performances for Take-Two's annual sports games, the continued staying power of Grand Theft Auto V (GTA V), and the hugely successful launch of Red Dead Redemption 2 (RDR 2) have helped the company buck industry and market trends. 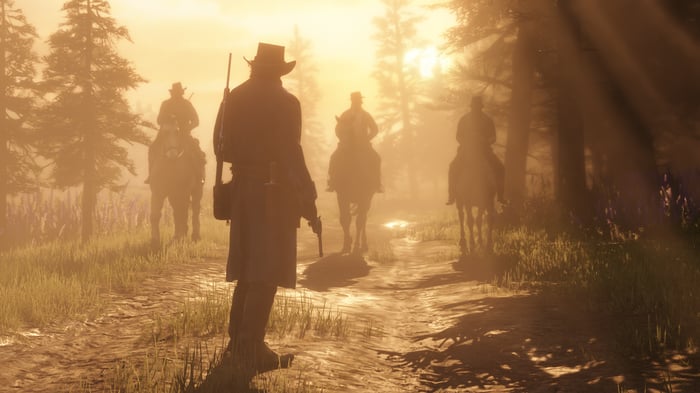 Take-Two stock has seen some big swings this year, with a release delay and a couple of earnings items that fell short of analyst expectations, triggering big sell-offs. However, shares have inched higher across the stretch thanks to the apparent strength of the company's product portfolio.

The gaming company's valuation hit a new high in January, but it went on to see steep sell-offs in the following month after the company delivered third-quarter earnings. Sales and profits for the period each surpassed the average analyst estimates, but the results arrived along with news that Red Dead Redemption 2's release had been pushed to October. Delays for video games can sometimes be indicative of quality issues, and shares closed out the month roughly 12% lower on the postponement news.

Take-Two and other leading video-game publishers continued to see soggy stock performance in March and April as the market weighed the possibility that competition from Epic Games' hugely popular mobile game Fortnite would cut into their performances. Shares rebounded in May amid momentum for the broader market, strong fourth-quarter results, and news that GTA V had surpassed 95 million units sold.

Shares got another boost after the company reported first-quarter results in August, with shares gaining roughly 18% in the month thanks to sales and earnings that came in ahead of analyst targets and mounting expectations that Red Dead Redemption 2 would go on to be a hit. The stock continued to trend higher following the earnings release, and shares went on to hit their current lifetime high of roughly $140 in October before selling off big amid the broader market's contraction.

Take-Two stock actually sold off following the release of Red Dead Redemption 2 on Oct. 26, but it posted big gains after the company published a press release on Oct. 30 revealing that the title had generated $725 million in revenue across its first three days on the market. That debut was the second-best ever for an entertainment release, trailing only the $1 billion in sales generated by the publisher's own Grand Theft Auto V  across its opening three-day stretch. However, that wasn't the last of Take-Two stock's recent swings.

The company published second-quarter earnings on Nov. 7, and results once again came in ahead of the average analyst estimates. However, profit targets for the current quarter arrived slightly below expectations, and this miss (in conjunction with market volatility and investors seemingly taking a more cautious outlook on digital sales growth) helped send shares down double-digits in the week of trading following the release.

Take-Two stock was already priced for strong growth, so shares pulling back from the lifetime high they hit earlier this year amid a significant contraction for the broader market is to be expected. That said, the case can also be made that the company's outlook has never been stronger. The fantastic reception for Red Dead Redemption 2 bodes well for the publisher's performance over the next couple of years, as the title has elevated the franchise and will likely continue to put up impressive unit sales and generate in-game revenue through its online mode. The beta version for Red Dead Online is set to launch later this month.

The company expects sales for the current quarter to come in between $1.1 billion and $1.15 billion, spurred by strong performance for RDR 2 and up roughly 134% compared to the prior-year period. Management expects to record earnings per share of $2.55 for the period, off slightly from the $2.59 target suggested by the average analyst estimate. However, with sales for RDR 2 coming in ahead of management's and analyst's expectations, that discrepancy might easily be explained by the company ramping up development on new titles.