Please ensure Javascript is enabled for purposes of website accessibility
Log In Help Join The Motley Fool
Free Article Join Over 1 Million Premium Members And Get More In-Depth Stock Guidance and Research
By Rich Smith - Nov 19, 2018 at 11:36AM

Investors fear the cost of an expansion into orthopedics.

Investors in Annapolis Junction, Md.-based Colfax Corporation (CFX 1.82%) are watching their stock get chopped -- down 16.4% as of 11:45 a.m. EST -- after the diversified industrial technology company announced a $3.15 billion deal to buy DJO Global from its private-equity owner, Blackstone, this morning.

Better known as a maker of heavy-duty centrifugal and axial fans, gas compressors, and equipment for cutting and welding steel, Colfax is now expanding into the field of "orthopedic devices, software and services" with this acquisition -- and investors aren't particularly happy about that. 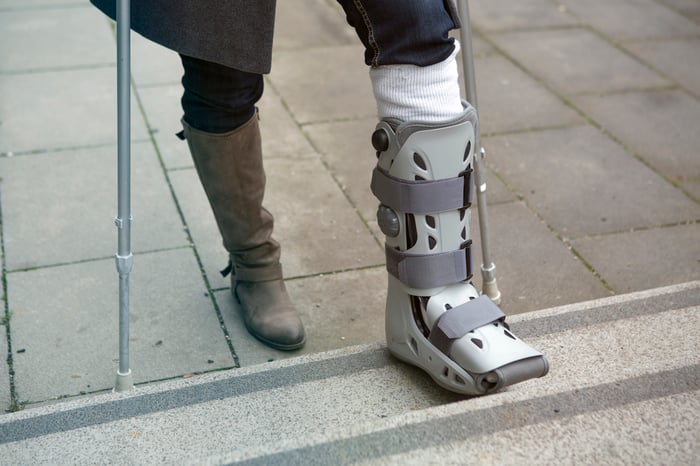 Colfax enters a brave new world of orthopedics -- and its first step is a doozy. Image source: Getty Images.

Why not? Well, there's the obvious fear: that Colfax may be overpaying. In its press release describing the acquisition, Colfax notes that it will be paying $3.15 billion cash to acquire DJO and its $1.2 billion revenue stream. (Hint: Colfax doesn't actually have $3.15 billion in cash lying around. According to S&P Global Market Intelligence data, it's got barely $285 million -- and $1.1 billion in long-term debt.)

There's also the possibility investors are concerned that "orthopedics" aren't exactly in this company's wheelhouse. Investors may worry that in its effort to accelerate revenue growth (currently stuck in the low single digits), Colfax may be falling into a diworsification trap.

Addressing both these concerns in one go, Colfax advised in its press release that it is, in fact, "committed to reducing leverage and restoring balance sheet flexibility near-term." To that end, the company "will explore strategic options for our Air and Gas Handling business." In other words, Colfax plans to exit one business as it enters a different one -- and use the proceeds from selling its air and gas handling business to help pay for its purchase of DJO.

Even so, management says it will need to use $100 million of its cash on hand, draw upon its "credit facilities," issue new debt, and probably issue and sell "$500 to $700 million from a contemplated offering of equity or equity-linked securities" in order to make this deal happen.

Investors can be forgiven for thinking that all this is quite a high price to pay for Colfax to completely revamp its business model.