Please ensure Javascript is enabled for purposes of website accessibility
Log In Help Join The Motley Fool
Free Article Join Over 1 Million Premium Members And Get More In-Depth Stock Guidance and Research
By Lee Samaha – Nov 20, 2018 at 8:48AM

A look ahead at what investors can expect next year and why the U.S.-China trade dispute matters so much.

The weakness in industrial sector stocks in the last few months is largely a consequence of doubts over growth prospects in 2019. Although it's been a good year so far, there's a sense that U.S. growth has peaked and economic data out of China is starting to show some weakness in the face of trade disputes. What are investors to make of it? Fortunately, two leading industry bellwethers, Emerson Electric and acquisition target Rockwell Automation, have given their 2019 guidance already. Let's take a look at what their management said and what it means for investors.

The two companies are heavily reliant on capital spending from their customers. This makes them useful to follow because it's the sort of spending that increases in an upturn and then gets cut when the economy turns down. Indeed, the cyclicality in their sales growth is on display in the chart below. The U.S. industrial recession in 2015-2016 hit both companies hard, but the recovery in 2017-2018 has favored them and they closed their fiscal year on a high.

Moreover, both companies end their fiscal years at the end of September, and therefore management gave their 2019 outlooks, which obviously will include much of calendar 2019. 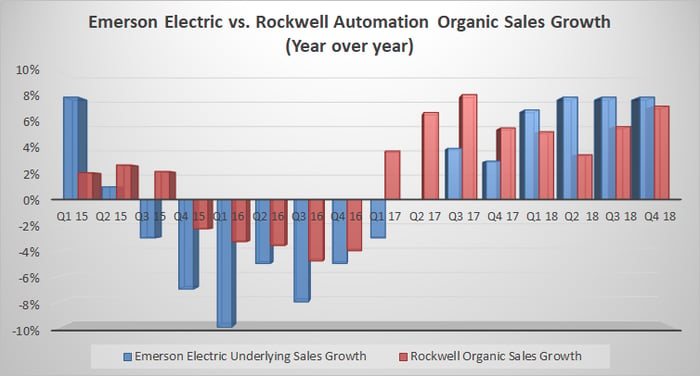 It's a good idea to start with the actual guidance for organic sales growth, and the good news here is that both are forecasting growth in the mid-single digits for 2019. As you can see below, the guidance ranges for 2019 are nothing like the slowdown experienced in 2015-2016 -- implying end-market conditions will be favorable again next year.

The guidance from both companies makes them look attractive investment options. Both are very good at converting income into free cash flow (FCF) and guidance implies double-digit growth in FCF -- not bad for two companies whose valuations look good even based on current FCF valuations. 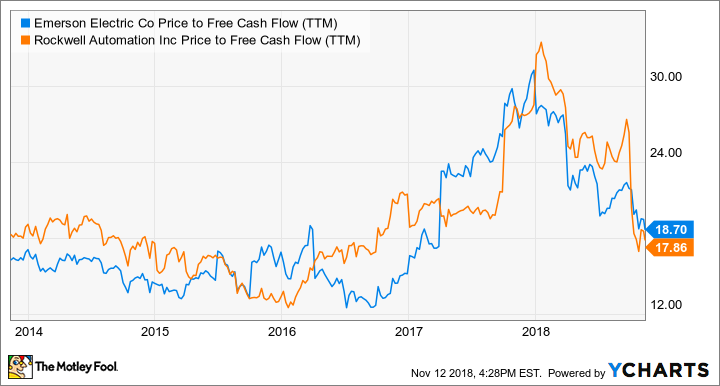 Emerson Electric CEO David Farr always gives good commentary and the key takeaway from his earnings presentation was a feeling that Emerson's end markets are broadly positive in 2019, but he expressed some concern for China and Europe. Farr sees U.S., Canada, Latin America, and the Middle East and Africa all growing in the mid-single digits in 2019.

For China, Farr is "looking at growth in -- more in the 7%, 8%, 9%, maybe 10% if we see a little pickup in the second half of the year." Although this looks good, it's worth noting that Emerson grew at a 17% rate in China in 2018. He also went on to stress that "I want to make sure investors understand, there are concerns that I would have would be in Asia, would be around China. I think Europe potentially could weaken."

His caution on China is related to trade tensions between the U.S. and China, and although there's the possibility of some upside to Farr's guidance given a successful resolution to the trade disputes, there's no guarantee that there won't be a downside, too.

Emerson is more of process automation company and therefore has more exposure to heavy industries, notably in oil and gas-related capital spending. In comparison, Rockwell Automation is more of play on discrete automation (automated processing in manufacturing) and has more broad-based market exposure.

Just as with any company with diverse exposure, its end markets are never going to fire on all cylinders at the same time. Indeed, as Rockwell CEO Blake Moret outlined on the earnings call when discussing full-year results, "Our diverse industry exposure enabled us to deliver 5.5% organic growth even though one of our larger verticals was down 10%."

The industry vertical he's referring to is the automotive market. Due to a passing of peak production in the industry, Moret isn't expecting much from automotive in 2019. He outlined on the earnings call that "with the midpoint of guidance, we're looking for continued growth to be driven by heavy industries as well as consumer. And in consumer, food and beverage and life sciences are the largest contributors of that. At the midpoint, we're expecting a flat automotive vertical." 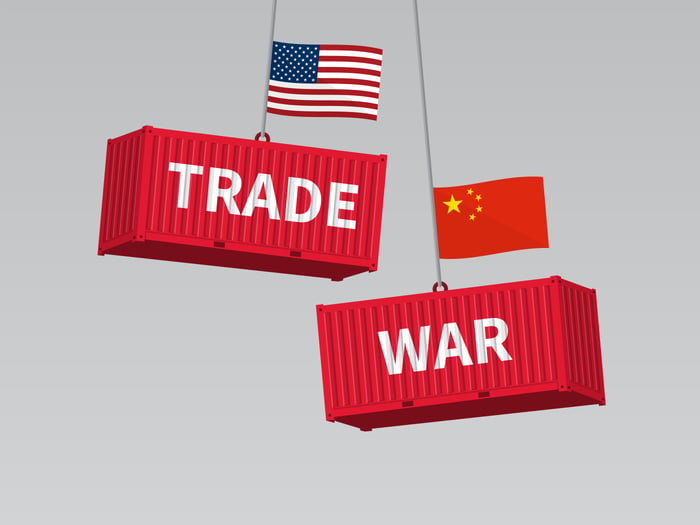 In a word, China. In a sentence, the trade dispute between China and the U.S.

Emerson's Farr was explicit that China would be a swing factor in its 2019 results. Meanwhile, Farr and Rockwell's Moret are expecting good growth from heavy industries and oil and gas in 2019. However, if China's growth slows markedly, then it's likely to hit demand for commodities, and that could negatively impact energy and metals and mining prices -- ultimately capital spending plans are likely to get hit.

All told, it's important to follow the trade negotiations. Any reduction of tension could be favorable for both companies, while an increase in trade tariffs with a concomitant negative impact on China's growth could cause issues for industrial companies' growth expectations from Asia.