The wild ride continues for this Chinese e-commerce growth stock, but eventually, its business results will determine whether it's a great investment or not.

The big jump follows the release of the company's third-quarter financial results yesterday after market close, which came in ahead of Wall Street's expectations. Baozun reported $161.7 million in net revenue and non-GAAP earnings of $0.13 per share, beating revenue expectations by about $560,000 and the bottom line by $0.03 per share. 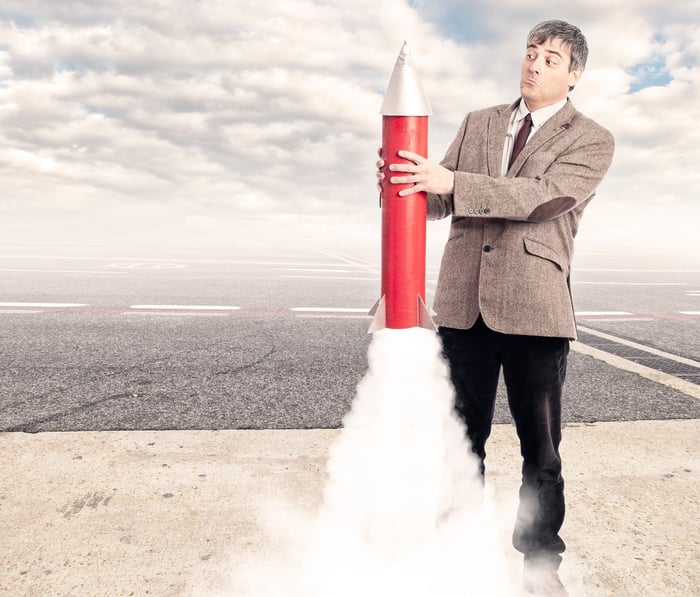 It reported 24.8% revenue growth, but more importantly, its services revenue increased 45.1%, helping drive 41% operating income growth. Gross merchandise volume -- the selling value of goods sold on its e-commerce platforms -- increased 55%, with the vast majority of that growth coming from nondistribution volume (meaning Baozun provides the e-commerce solutions, not the physical distribution of goods).

The company also reported solid growth in the number of brands partnering with it for e-commerce services, up 18% to 172 year over year.

Operating expenses were up 24%, slightly less than revenue (a good thing in general) and much lower than the growth in services revenue. A closer look at operating expense shows that management is prioritizing spending that should result in further growth. Sales and marketing expense was up 36%, while technology and content expense nearly doubled, primarily due to recruiting and hiring more "technology-focused" staff.

It's relatively typical for a stock to move up or down based on the company's results in relation to Mr. Market's expectations, and that's been especially true for Baozun in its short history as a public company. One has only to look back less than two weeks to the market's extreme negative reaction to Baozun's results from China's massive "Singles Day" results, sending shares down 21% in a single day.

This kind of substantial volatility isn't likely to change anytime soon, either. Between fears of the impact of the looming trade war between the U.S. and China, along with China's less-than-stellar reputation on intellectual property, Chinese tech stocks like Baozun will face plenty of ongoing negative sentiment in the foreseeable future. With 15% of shares held short, according to the most recent data, there's a lot of money betting against the company. That alone will keep its shares volatile.

But that volatility could help deliver incredible returns for shareholders who are willing to ride it out, as long as management continues to deliver strong results like it did in the third quarter. Over the long term, business results will trump short-sellers and short-term market movement.

Why Baozun Stock Was Gaining Today
413%